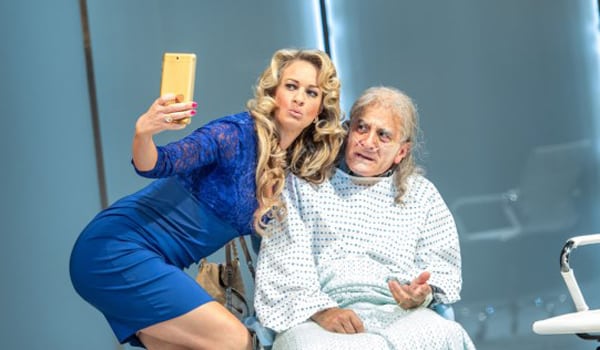 Someone is at the door. The very rich man and his retinue go into action. A hospital bed complete with portable drip machine and modesty screens is hastily assembled. Screens conceal his on-display wealth. The rich man changes into hospital gear and dons a wig. He contorts his face in a manner suggesting the ravages of pain, perhaps palsy, and does something with his mouth that reeks of invalidity, disease, a short walk to destiny. There is almost certainly drool.

The smartly dressed visitor arrives and is suitably beguiled by the pantomime of illness. Intent on securing access to the “dying” rich man’s fortune when the unhappy day of judgment arrives, the visitor gives bounty to the “invalid”. As ruses go, it is a good one. The rich man gets richer; his foolish, obsequious would-be parasites are relieved of assets they clearly have no need for.

This is Trevor Nunn’s hotly anticipated return to the RSC, his revival of Ben Johnson’s 1606 play, Volpone, now playing at the RSC’s Swan Theatre at Stratford Upon Avon. It would be wonderful to be able to report that the production was worth the wait. But it isn’t.

As the programme reminds us, TS Eliot, in his 1921 collection of essays, The Sacred Wood, said of Ben Johnson: 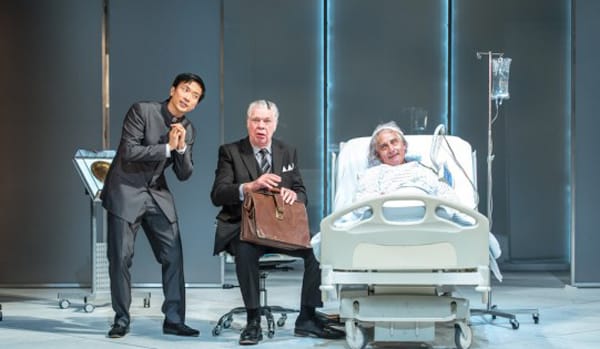 Nunn’s approach with this revival is to take Eliot literally and to transpose and update Johnson’s play so that it is full of topical references and given life by modern caricatures. It veritably teems with modern touches: security cameras and monitors; avaricious, suited and booted businessmen; an American tourist; entitled politicians and their disgruntled wives; a profound hatred of bankers.

All this would be fine if it actually contributed to the understanding of Johnson’s play, if this approach illuminated the text, made it funnier than it otherwise would be, or somehow provided an insight or appreciation that would otherwise be lacking. But, in truth, the reverse is really true. The updated accoutrements stick out, interrupt the flow of Johnson’s pen, and puzzle rather than enlighten.

You spend a lot of time wondering why Peregrine is American. You spend a lot of time wondering why Volpone keeps a dwarf, a eunuch, and an hermaphrodite as a trio of servants/clowns and why he allows them to dress so eccentrically. You don’t wonder why, in Stephen Brimson Lewis’s starkly glamorous set, Volpone has his treasures on display or that he hides them away with smooth opaque screens when guests arrive, but you do wonder why Sir Politic Would-Be is at an airport when he chances upon Peregrine.

The modern touches seem grafted onto the narrative rather than a seamless, necessary canvas upon which Johnson’s action can be given colour and life. The updated references which pepper this adaptation (script revisions are credited to Ranjit Bolt) are apt for a modern comedy or revue, but they distract and deflect from the real comic gold – Johnson’s characters and complicated plot devices.

Henry Goodman is assured and magnetic as the titular Volpone. He gives a larger than life performance which suits – entirely – Johnson’s larger than life character. In the extreme, absurd comedy, Goodman is very good indeed. His fake almost-dead patient is a riot, not the least because when Goodman has his wig and hospital gear in full flight, he bears an uncanny resemblance to Worzel Gummidge as played by Jimmy Savile. There is something splendidly repulsive yet unsettlingly endearing about him in this mode. Equally, his Pirelli-esque turn as an Italian snake-oil salesman type is inspired, bursting with energy. 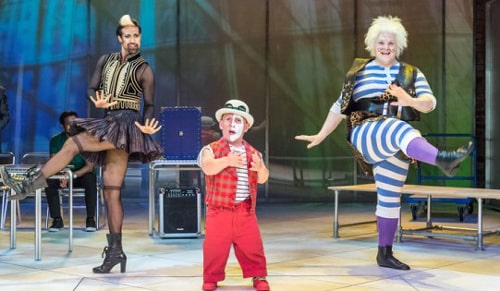 But his performance is fatally flawed, through no fault of Goodman’s, but through the other key piece of casting. Mosca, Volpone’s assistant and accomplice in deception, is a superb role, and both complementary to that of Volpone and essential to the success of the production. Orion Lee was entirely incapable of meeting the rigorous demands that come with Mosca and so Goodman’s Volpone is denied the crucial comedy duo Johnson intended. So much is lost by the mis-step with Mosca that, alas, the production never recovers and cannot hope to be what it should be.

There is some excellent work from Miles Richardson as an unctuous would-be-beneficiary of Volpone’s largesse and Richardson’s initial encounter with the Worzel Savile Volpone is very funny, in stark contrast to the scenes which follow concerning Matthew Kelly’s dreary and teeth-grindingly unfunny Corvino. Kelly has an astonishing ability, if unchecked, to look like he should be funny while delivering dialogue that could not get a reaction even with Berocca tablets and water. Geoffrey Freshwater fares somewhat better as Corbaccio, thankfully, but, again, the laughs are few and far between.

Steven Pacey is oddly stiff and seemingly mistakes wooden for self-important as Sir Politic Would-Be while Annette McLaughlin appears to be auditioning for the new owner of the Albert in Eastenders as Lady Poltic Would-Be, an alarming but not altogether unpleasing character choice. At least she is funny, which is not something which can be said of Colin Ryan’s curiously American Peregrine.

Next to Goodman, however, the acting honours go to Andy Apollo, who makes Bonario intelligible, understandable and enjoyable. Apollo makes the text work for him without any affectations or tricks. As a result, his performance soars.

Steven Edis provides curiously untuneful and weary tunes for the trio of dwarf (Jon Key), Hermaphrodite (Ankur Bahl) and Eunuch (Julian Hoult) and that, together with their lousy but garish costumes – why would Volpone permit such tawdry attire? – robs the three of any chance at humour, glamour or bawdy commentary.