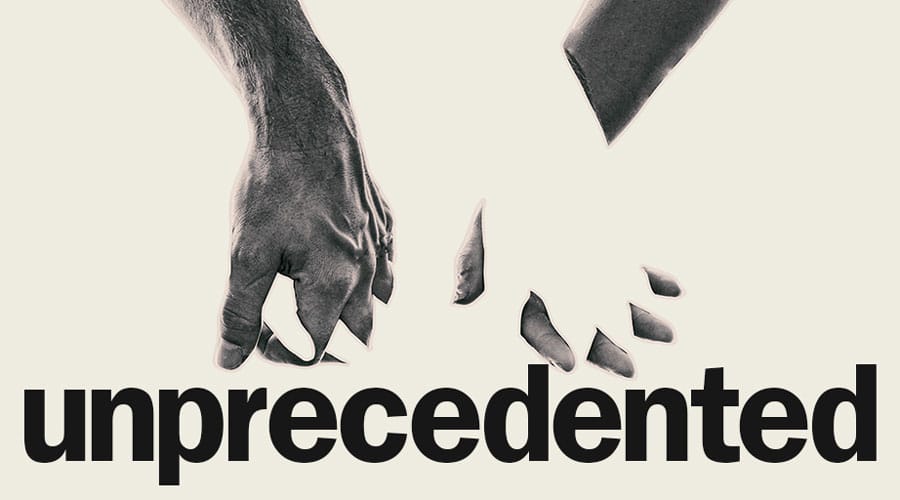 Some people I know are resisting watching “too much” theatre online, insisting that the live element is so crucial, they are going to wait it out until theatre returns. It’s true that nothing can replicate the experience of being in an audience watching live theatre but don’t deny yourself of some very impressive work which is beginning to be established online. Chief among this is Headlong’s Unprecedented, created with Century Films for BBC Arts, now available on iPlayer. An impressive range of playwrights and over 50 actors have created five episodes consisting, in the main, of three ten-minute plays. Conceived, written, filmed and produced during lockdown, there is something for everyone.

The series gets off to a strong start with episode one, and the first piece, Viral, written by James Graham, a playwright definitely on a roll at the moment following his TV adaptation of his play Quiz, and the NT screening of This House. Here is he gives authentic voices to three teenage boys, who won’t be doing A-Levels because school is shut, who try to create the next viral craze. There’s a sweet moment when one lad comes out as bisexual and the other two already know, and they offer support and comfort. Penny by Charlene James Ray is beautifully performed by Lennie James, playing a homeless man now housed in a hotel room, desperate to talk to Penny, who is, and revealed at the end, his dog. He muses that it took a pandemic for society to care about the homeless, and he knows that his life is a lot more complicated than simply having a roof over your head. Going Forward, by John Connelly, is a team meeting in which the leader needs to take good news into her next “very important” meeting. If the participants can’t give her good news or positive spins, they are cut off- underlining how daily press briefings have been spun and controlled.

Other highlights, for me, include the wonderful Sue Johnstone, in Everybody’s Talking by Chloe Moss, (Episode 5). She is a recently bereaved mother, whose three daughters offer her online Pilates classes, recipes, art classes, everything they think will help with her loneliness. But their concern is overwhelming, and Johnstone very quietly closes the laptop, needing time alone to grieve. Duncan McMillan’s Grounded, (episode three), beautifully twists expectations as stressed daughter Liz despairs of her parent’s cavalier attitude towards the virus, and tries to ground them. However, with even a horror movie in the making in Central Hill, the diversity of the series makes every single piece worth watching.

I found the plays more effective when there were fewer characters. House party, by April De Angelis has too many characters and is a bit chaotic like an online house party can be, and we don’t get to know many characters, and, as much as I admired Going Forward, some actors barely speak, although they beautifully convey their discomfort at their bosses bullying. That said, this is a highly considered, effective and entertaining response to the pandemic, skilfully using technology that most of us were not aware of three months ago, to begin telling and archiving the state of our coronavirus nation.