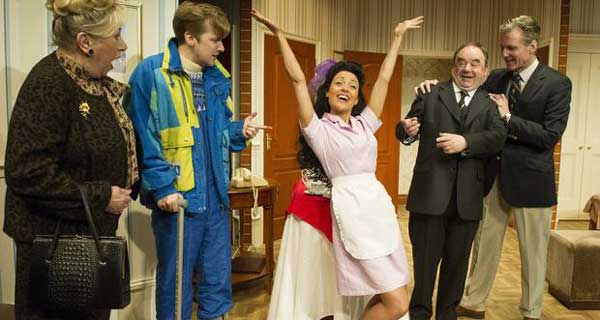 In the programme for his production of his play Two Into One, now playing at the Menier Chocolate Factory, Ray Cooney talks about casting for farce and says:

The secret to farce is an irresistibly complicated plot that makes sense (at least in a kind-of way), inherently laughable characters and actors such as Cooney describes. The plot needs to build from a simple proposition and add layer upon layer of complexity and intrigue until it bursts with unconstrained humour. It’s not a place for people who don’t want to work in an ensemble or share the spotlight with others. It’s not for scenery chewers or muggers – it requires immense discipline, intensely honed skill and a shimmering regard for and understanding of style and panache.

Farce is much harder to pull off than tragedy. Fact. It is way too easy to overplay farce, to replace the truthfulness Cooney speaks of with desperation for laughs.

Two Into One is a marvellously constructed farce which centres itself on that easy to despise group – Conservative politicians, complete with a lust for extra-marital affairs. Almost effortlessly, Cooney’s writing introduces and swiftly defines the key players and then proceeds to roll them around in tumbleweeds of hilarity.

As the Junior Minister, second in command at the Home Office under Margaret Thatcher, Michael Praed’s Richard Willey is the epitome of the Etonian born-to-rule politician. He is tall, handsome, refined and debonair, resplendently charming, but with a twinkle in his eye because he is planning an assignation with a young secretary from the PM’s office. Praed is impeccably right, in every way, for this role. His unflappability aura is challenged, his hay fever is ignited, his incomprehension at the secret gay double life of his personal private secretary all-consuming and all the while erupting charm like a volcano. It’s a pitch-perfect, pinched and precise performance. Hilarious.

As Mrs Willey, Josefina Gabriela is equally pitch-perfect. There are not that many actresses who can bring the house down simply by, with only the lower part of one arm and a hand showing, closing a door firmly. But, like everything else about her performance, this moment is perfectly and precisely judged for maximum comic effect. She is beguiling in every way, whether being caught up in the moment of an unexpected opportunity for an affair or in facing her own husband in bed when she was hoping for another. There is a sublime archness about her work here which is radiant. Hilarious.

In the most difficult role, that of the hapless, confused and put-upon personal private secretary to Praed’s Willey (George Pigden), Nick Wilton is a desperate, confused, bumbling, story-telling, face-saving clod of the kind and mis-used sort. He does a lot of clever physical comedy which is never overdone or overly ambitious and which, although obviously rehearsed with military precision, looks fresh and occasioned by happenstance each time. He becomes the embodiment of utter bewilderment and confused, suffering rage. Hilarious.

The rest of the cast are equally bliss making. Tom Golding is terrifically funny as the would-be actor who sheds his clothes at the drop of hat for what he thinks is an audition and then is seamlessly rolled into the fake gay love sub-plot for quadruple laughs. Kelly Adams is lovely as his wanna-be unfaithful wife, with her fake wig and garish sunglasses disguise and her penchant for being stuck underneath room service trolleys. With a silver pitchfork firmly inserted upwards into his bottom, Jeffrey Holland’s hotel manager is a marvellous confection of haughty self righteousness and worthy indignation. Hilarious.

Kathryn Rooney, as the token Labour MP, prowls around the stage like the love child of Mary Whitehouse and a Great Dane, full of threatened piss and vinegar, and promising a scandal at every turn. A mistress of the deathly stare and the raised eyebrow, she could strike fear into stone. But she is light enough, quite correctly, not to unbalance the theatrical harmony. Hilarious.

Ray Cooney appears as the doddering waiter who tries to keep track of the machinations that surround the Willeys and their entourage. At 82, he is as precise and clear and in-the-moment as the younger folk, and genuinely funny. His fog of comic genius travels wherever he goes. Hilarious.

There is a remarkable symphony of precision door closing and slamming here; this cast must have spent hours ensuring the timing was exact. It reaps great rewards and despite the choreographed precision, the freshness of the situation is utterly preserved. It all seems spontaneous, even though you can clearly see the hard work that has made this so. Bravo and brava to each of the cast and the director. The door slamming alone is worth the ticket price.

Julie Godfrey’s is slightly cramped but works well in the space. The period is evoked clearly and cleanly and the old-fashioned sense of the hotel helps make the gentle nature of the comedy work that much better.

Cooney’s direction is crisp and clear. There is nothing not to admire here in his work.

This is funnier than anything that has played in the West End since One Man Two Guvnors first transferred.