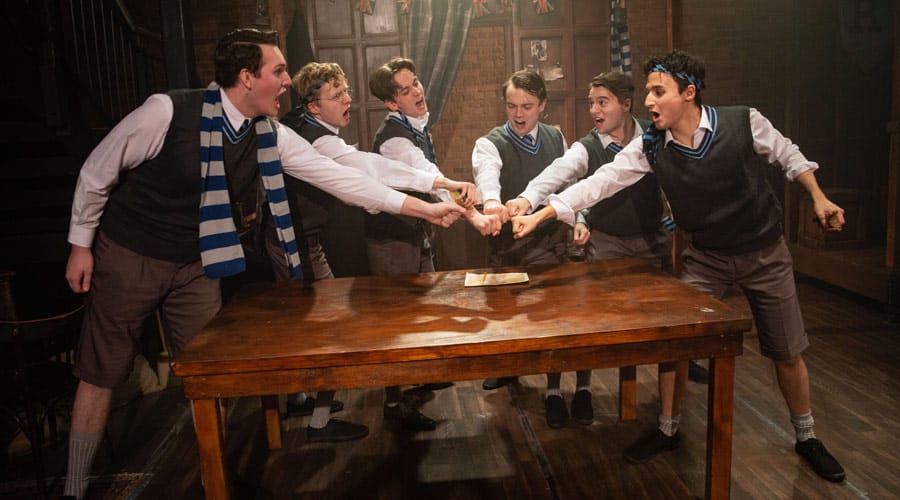 As the front cover of the programme for this presentation reminds us, the Second World War ended in Europe 75 years ago.  So, you might think that – by today – people might have moved on and begun living in the here and now.  Not a bit of it.  This country – or, at least, the Little Eng-er-lish, Brexit-voting constituency – is still almost as obsessed with this long past event as it was when it was fresh, in May 1945.  And why?  One really wonders.  Perhaps for the same reasons that when it comes to ‘news’ stories it cannot think of anything more interesting than the latest shenanigans amongst the Windsor family of, well, Windsor.  Thus, at the same time as we see the city festooned by the lurid sunset glow of ‘1917’, the Union Theatre in London SE1 serves up yet another slab of cold gammon-substitute spam.  For the ‘revival’, director and company-leader, Phil Willmott has partially re-jigged the yarn by the 19th century Rugby School ‘Old Boy’ Thomas Hughes, and he has set it in the wartime 1940s.  His note in the programme asks, ‘Can we really celebrate Brexit even as we commemorate the 75th anniversary of VE Day?’ – a question which might as well be put the other way around – and this is the first of three shows mulling over – once more – this already much-mulled history, with Lionel Bart’s ‘Blitz’ and Noel Coward’s ‘Peace In Our Time’ to follow. 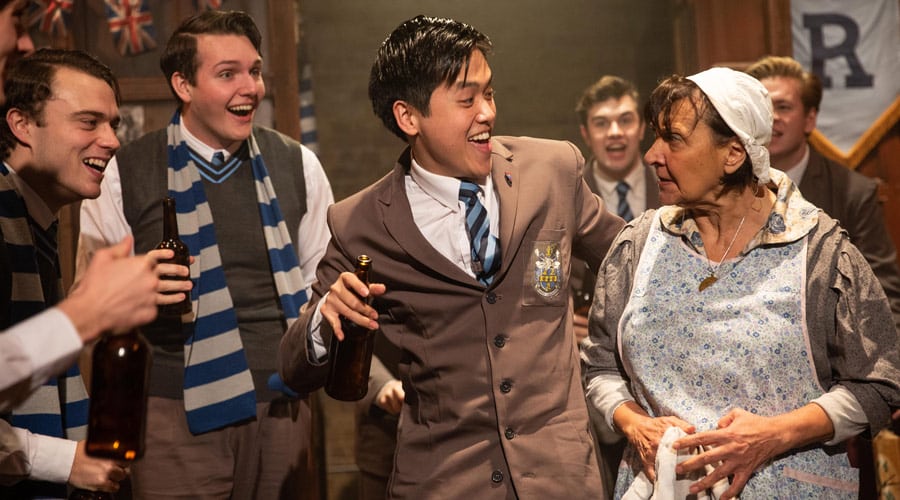 Well, it’s a point of view.  Maybe it seemed like a good idea to take Hughes’ potboiler and revamp it for the age of swing and ration books.  Possibly.  However, we cannot but also remind ourselves of the opening line to Hughes’ preface to the sixth edition of his best-seller, ‘It is not often that in later years one finds any book as good as one remembers it from one’s youth.’  Indeed.  While this story once made a serviceable TV series in the 1970s, its rambling episodic structure is nothing but a liability on the stage: Willmott, sadly, is unable to find focus or point to the text, and we shift from one scene to another, plodding through it, with less and less sense of where we are going, or why.  Maybe that is his drift?  Who knows.  He directs with some admirable facility and smoothness, but the script contains jolt after jolt, not least in the unaccountable glossing over of the story’s one really big ‘action’, the suicide of one of the teachers at the school – a bewildering dramatic error that simply confuses the audience and pushes us further away from caring about those we are watching. 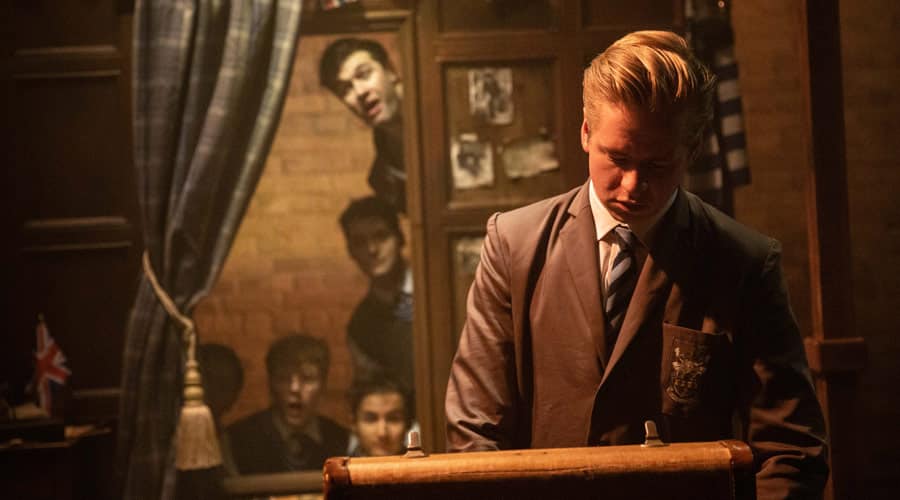 In the face of such weaknesses, the rest of the creatives do what they can to make things work.  Reuben Speed dishes up an attractive design of a realistic pair of trucks with a smattering of real looking furnishings; and this is lit by Ben Bull with glorious panache – his sumptuous illuminations, making the most of varied densities and colours, are the principal visual achievement of this production.  There is a grand piano on stage, and this Ralph Warman uses to underscore the action and – often as not – to support the many vocal numbers executed by the cast with charming cohesion: as a debut in the role of MD, it’s a great success: his arrangement of the opening hymn, in particular, is a pearl.  Penn O’Gara dresses the company with confidence and style, with everything done very naturalistically.  The relentlessly ‘realistic’ approach, however, never once permits the imagination to take flight, and the show stays earth-bound throughout, and the first half especially – a mere 45 minutes – feels very much longer. 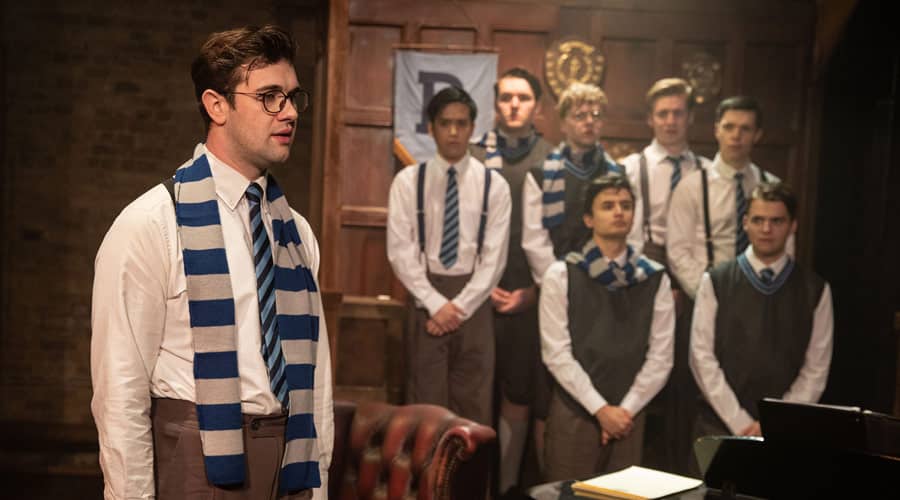 Furthermore, amongst the players, only one actor manages to become the master of the material.  Ursula Mohan draws on her terrific comedic skills to make the cook Sally into a fully credible and likeable character: she knows exactly how to position and pace a laugh while remaining always in the role and never appearing to strain or work for an effect.  Every second she is on stage is a pleasure.  Alongside her, alas, the rest of the cast always seems a step or two behind the problems created by the script.  And it is a large cast, too: one wonders how such a small theatre is able to support a company of fourteen for a short run and three weeks of rehearsal!  Sam James Page as East is relaxed and assured, with a face that constantly suggests hidden depths; Mikko Juan is energetic and lucid as the head boy, Brook; Toby Wynn-Davies begins well as Grimstead, but runs into a difficulty that bedevils many others: his part lacks variety or substance.  Thus James Horne as headmaster Dr Arnold and Alex McKeon as school bully Flashman (he of the famous spin-off series of novels) run out of steam having but a one-note (at a time) characterisation to pursue.  When the book was put onto the A Level English Language and Literature syllabus some years ago, students struggled to find anything memorable or insightful in its pages, and the same conundrum here taxes these fine actors.

It all adds up to very little, and in the absence of any imaginative or transformative production, there isn’t much to find entertaining or engaging.  Instead, the audience sits with increasing restlessness, awkwardly finding the po-faced text self-parodying, and remembering instead more artistically coherent responses, like Lindsay Anderson’s ‘If…’ or Michael Palin’s ‘Ripping Yarn: Tomkinson’s Schooldays’.  Now, what was it that Hughes once said about the impressive books of one’s youth….?