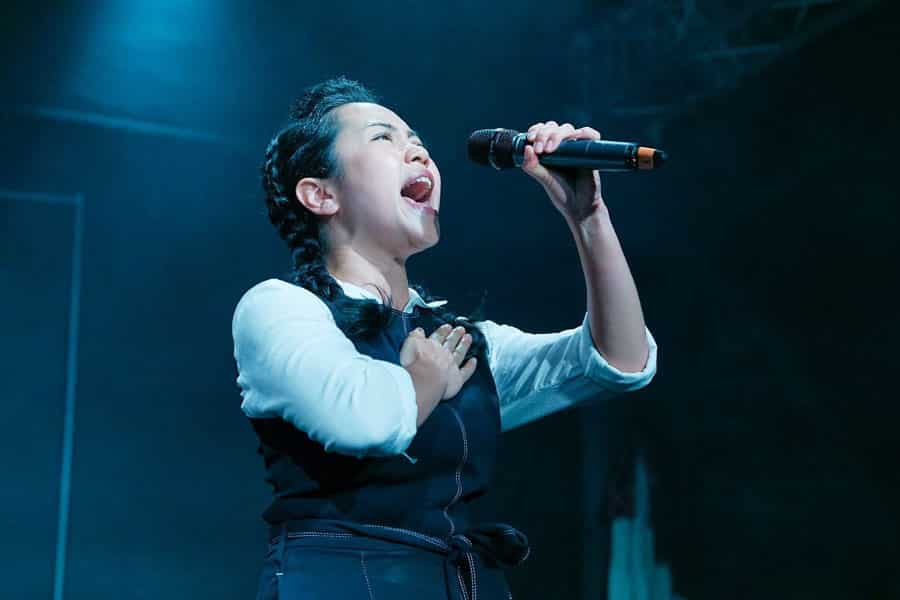 Burnt Lemon Theatre throws light on a shocking episode of injustice in their new show, Tokyo Rose. With a driving insistent score, they have created an energetic musical that tells the story of American woman Iva Toguri d’Aquino who was charged with treason after she took part in English-language broadcasts to Allied soldiers in the South Pacific during World War II.

Going back to her being born on the Fourth of July in Los Angeles to Japanese-born parents, the show highlights the treatment of immigrants and their children as outsiders – a theme that is still very relevant today both in Britain and the USA. After growing up in California and going to UCLA, Iva was pressured into going to care for a sick aunt in Japan – only months before the US was drawn into the war by the attack on Pearl Harbor. Burnt Lemon explores how Iva finds herself trapped in Japan and, needing work, ends up at Radio Tokyo. She identifies as American and refuses to give up her citizenship or take part in anti-American propaganda, making her later treatment by the US system all the more outrageous.

Written by Maryhee Yoon and Burnt Lemon’s joint artistic director Cara Baldwin, the show grippingly captures the unfairness of how Iva was treated and the xenophobia that lay behind it. Directed by Burnt Lemon’s other artistic director Hannah Benson, the all-female cast of five, led by Maya Britto as Iva plus Baldwin, Benson, Lucy Park and Yuki Sutton, is excellent. The music composed by William Patrick Harrison features some powerful songs including Iva’s despair in “Caught in the Crossfire” and her final plea in “I Am America”, part of a score that rarely lets up alongside the ensemble’s fierce choreography. The period is conjured up with sharp 1940s costumes by Erin Guan and a set based on vintage radio equipment, designed by Luke W Robson.

While Iva’s story is compelling, the show’s staging suffers from a slight sense of emotional detachment from the nightmare of what happened to her. But this is compensated for by the music and passionate performances, giving us a tantalising glimpse of a real-life story that few people are aware of. There is much more to Iva’s life than a one-hour musical could hope to convey, including her heroic efforts to help American prisoners of war, making it remarkable that her story has still not been properly told on film or TV.

Otherwise, please click here to continue to the New Diorama Theatre...
x
Send this to a friend