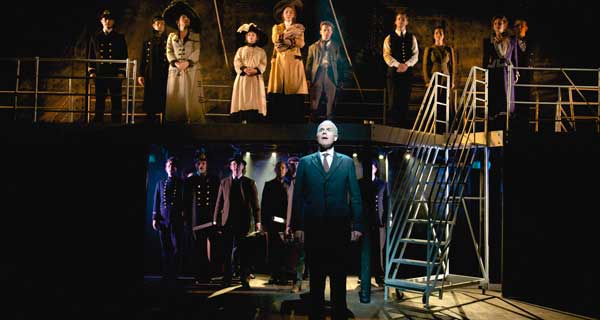 Having seen Thom Southerland’s small-scale revival of Yeston and Stone’s Titanic at the new Southwark Playhouse, there are several things which seem undeniable.

Firstly, this is a remarkable musical, truly epic in its imagination and score. The music is sublime, complicated, full of melody and harmony and specific character. It is truly a masterpiece – and the orchestration here (by Ian Weinberger) is particularly good; the sheer delight of the strings in action is worth the whole evening.

Secondly, this is easily Southerland’s best directorial work to date. Everything presented here is thought through and the production has a set of inner rules which all work and which make keeping track of the multitude of characters surprisingly easy. Davis Woodhead’s set and costumes, despite limited space and resources, create the sense of period and confinement very well.

Thirdly, Mark Aspinall’s musical direction is thoughtful and, in places, quite exciting: the full ensemble numbers are very affecting. But there is a tendency from the men to simply shout rather than properly produce the sound and diction is not always given the attention and clarity it deserves.

Fourthly, the dramatic interests of the text are very well served here; there are no really bad actors and many really good ones. Each character seems whole and understood and despite several people doubling up characters, each individual is clearly discerned and their place in the drama satisfying achieved. For a story where the outcome is certain from the start, this cast manages to achieve a high level of engagement from the audience – the secret being in who survives and why, rather than whether or not the ship makes it.

This is, easily, one of the best ensemble pieces the London Fringe has ever produced. And yet, some of the individual singing is not equal to the demands of the score or the epic quality of the piece as a whole. The simple fact is that every role in Titanic needs to be played by first rate singers who are also first rate actors. Here the balance, perhaps understandably, is weighted more towards the acting than the singing – many of the men simply do not have any middle voice and the lower notes seem beyond nearly all. Loud unsupported upper register singing is at a premium, but it is not that which fuels this juggernaut of a score.

The brightest lights are Greg Castiglioni (superb as the tortured engineer), Nadim Naaman (Clarke, the shopkeeper in love with the Lord’s daughter), Claire Marlowe (the Lord’s daughter), James Hume (Etches, the First Class Cabin steward, albeit with some initial diction issues) and Celia Graham (the social climber, Alice – exceptional).

There is inconsistent, but mostly impressive, work from Jonathan David Dudley (his Hartley is particularly good), Dominic Brewer (Lightoller), Leo Miles (especially the lookout sequence) and Judith Street and Dudley Rogers (the old couple who choose to die together). But better vocal work was essential from the three Kates (Grace Eccle, Scarlett Courtney and Victoria Serra) and Matthew Crowe ( who plays Bride impeccably but just cannot sing the great duet with Barrett).

On the other hand, much better acting was needed from James Austen-Murray (Barrett), Simon Green (Ismay, the cowardly vainglorious owner) and Shane McDaid (Farrell, the lad who is saved against the odds) to properly serve the piece.

That said, this is a thoroughly engaging production with many highs and real drama at play – and the music makes you float through the passages where the vocal work does not. Maury Yeston is a genius.