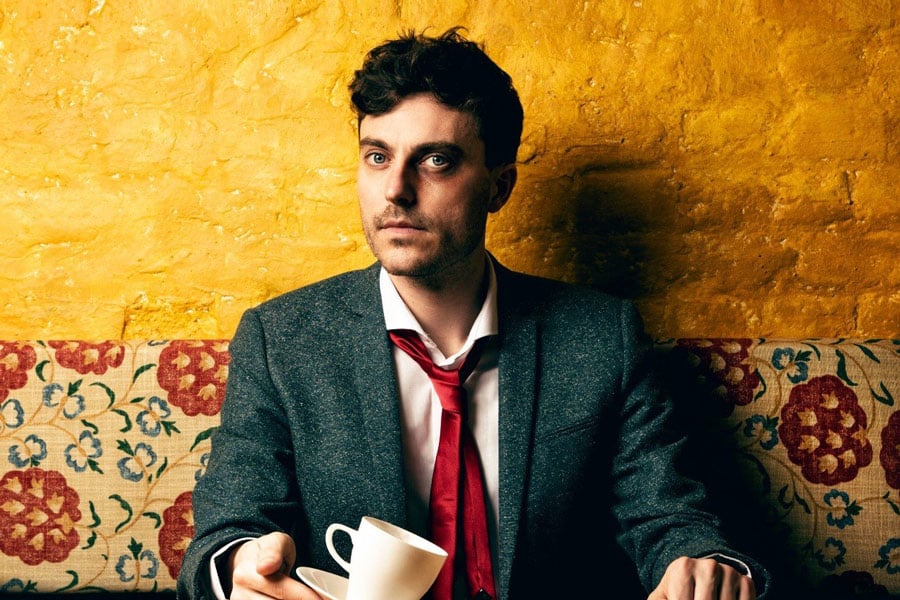 Actor Tom Machell explores a potent mix of themes in his debut play, Ticker. From grief to toxic masculinity and male identity, this solo show dramatises the impact of an unexplained sudden death, seen through the eyes of 28-year-old Georgie lad, Spencer.

We first meet him sat in a suit and red tie, sporting a black eye, in a fancy coffee shop. Bit by bit, we find out what brought him there and why he keeps avoiding calls on his mobile phone. His story is fragmentary, darting about in time, taking us back to when he met his girlfriend, Gabi, two years earlier and forward to the present day including the surprising reason for his mysterious shiner.

Ticker deals with serious themes but the writing is full of humour. Despite confessing to flashes of jealousy and rage, Spencer initially comes across as an easy-going joker, underlining his laddish inability to confront his emotions and sense of loss. If you haven’t read any publicity or reviews, there will be shock at the sudden death as well as tension over its causes – and whether Spencer is responsible for it. However, much of this tension is lost knowing from the Fringe programme that Machell wrote Ticker to highlight the heart condition, Sudden Death Syndrome. Information sheets about charity Cardiac Risk in the Young (CRY) are handed out to the audience as they leave.

With director Derek Anderson, Machell has created a memorable character but, in trying to convey Spencer’s inability to deal with what has happened, the story feels uneven and confusing at times. However, Ticker benefits from Machell’s strong, engaging performance as a troubled young man, broken and vulnerable but with a sinister streak of aggression.