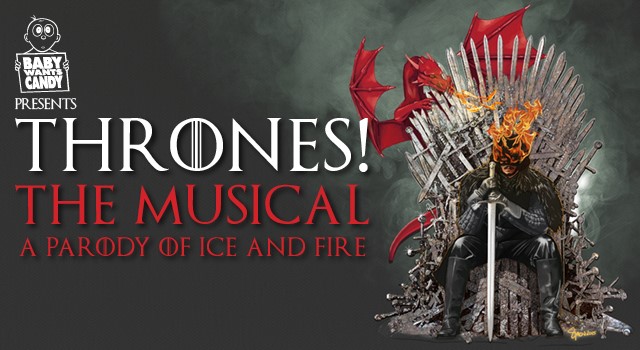 Back for a second year comes this musical parody of Game of Thrones. Given the popularity of the series, it’ s probably one of the easiest shows to sell on the fringe. What a relief then that the cast and parody are sword sharp!

There’s no point in non-Game Of Thrones fans attending. A knowledge of Harry Potter is handy when watching that play, and Thrones is a collective audience experience. To condense six series into this musical, the conceit is that a group of friends gather to introduce the show to their friend who has never seen it. Thus the highlights are presented, along with a fan theory to end the show.

You know nothing Jon Snow, Hold the Door, the walk of Shame- it’s all there for fans to indulge in! It’s a terrific parody and genius touches include Trump promising to make Westero great again and G R R Martin whinging about the fan base.

The cast are accomplished singers and comics. A particular highlight is the gospel-inspired number Hold the Door, with Chris Grace in fine voice.

The show comes in at under an hour, and maybe it’s time for the company to spread their dragon wings and expand the material- there was plenty of fire left at the end. One for the fans, but a parody that scales the wall of comedy!

BOOK NOW FOR THRONES THE PARODY MUSICAL AT EDINBURGH FESTIVAL