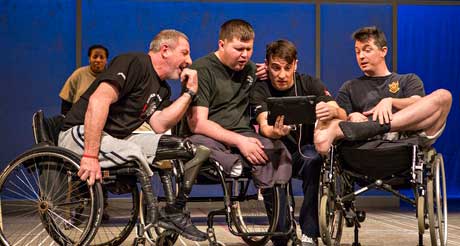 There have been many plays written about war, the rights and wrongs of it, the ins and outs of it, the detail of it and the results of it. Some plays are less successful than others in dealing with the topic and Blackwatch was the last work to really get under the skin of life as a soldier in a crack unit.

Now playing at the Richmond Theatre is Stephen Rayne’s production of The Two Worlds of Charlie F, a new play by Owen Sheers which draws its inspiration from the real life experiences of soldiers who served in Afghanistan.

It is not a play about war. It is a play about soldiers – the men and women who, for various reasons, sign up for their country, go to foreign shores and wage war and then have to live with the memories, the experiences and, in some cases, the life changing injuries.

It is compelling, remarkable and insightful; even more so when you know that over half the cast are not actors, but returned soldiers who are reliving their own experiences, sharing their own lives, exposing their own cauterised wounds, in an effort to enlighten and educate – and entertain – people who have not served in war zones about what life is like once the uniform is off for good.

There is no sentimentality here, no mawkish bid for sympathy. Au contraire. In some ways, the brutality of the honesty in the performances is difficult to endure; but, taken as a whole, the piece is a great testament to the strength and humour of the average human spirit.

The play opens uncompromisingly: a wounded soldier screams in pain, confusion and fear, certain he has been captured by the enemy when he is really at a base camp hospital. The scene is tense, violent and incredibly moving, especially after it transitions to some months later and you meet the soldier, on the road to recovery, his leg lost forever. This is the titular Charlie F, played here with a wonderful ease by Cassidy Little. You would never know he was not a classically trained actor.

The audience is taken on Charley’s journey, from sign-up to reconciliation with the new life he must cope with – and strive to embrace – following the loss of his leg in combat. It’s an uncomfortable and confronting journey, but it’s full of humour, spirit and hope. There is also great whacking swathes of anger and horror – but it never strikes a false note and never sways into melodrama or farce.

There are many extraordinary scenes and performances here. Some that will stay with me forever.

Stewart Hill plays Major Thomas with precision and icy calm, the perfect leader, the perfect husband longing for his far away family. Then you discover that, in real life, part of his brain was damaged in combat and he has lost the “executive” function, essentially the ability to think productively, and yet, there he is, delivering a pitch perfect performance of shattering intensity.

As Rifleman Leroy Jenkins, double amputee Dan Shaw is a revelation. The scene where he described the loss of his legs and his journey back to medical assistance is one of the most powerful moments I have ever seen in theatre. And he excels in the full range: his moment with Charley, when they are comparing leg stumps, is both genuinely funny and blindingly confronting.

Two of the trained actors, Owen Oldroyd and Tom Colley, provide another stark moment of pure power, when Colley strips down to his blast shorts (specifically designed to protect one’s manhood) and Oldroyd, methodically and dispassionately, demonstrates the kinds of injuries a soldier can expect if he stands on an IED by marking potential injuries on Colley’s body. By the end of the demonstration, Colley’s body was a Pro Hart painting, splotches and marks everywhere. Colley’s mute combination of fear and acceptance, together with Oldroyd’s firm assuredness, made the scene truly devastating.

There is excellent work too from Gareth Crabbe, Tomos Eames and Darren Swift and Colley is impressive throughout – his discussion of “Pink Mist” was both terrifying and seductive. Through these fine performances, and all of the others, a clear sense of soldierly existence is gleaned.

And there is some sensational work from the women in the cast, all of whom play a multitude of roles, crisply and wonderfully. There were no weak links but I found Miriam Cooper and Teri Ann Bobb-Baxter particularly impressive.

Importantly, and a real testament to the skill of the trained actors, is how seamlessly everyone works together, how impossible it is to be certain about who did fight in real life and who is simply acting. Oldroyd, in particular, excels at this sense of togetherness so vital for the work to succeed.

It’s all too easy to take the work of front line soldiers for granted: but these performances show you clearly why so to do is misguided and selfish.

Rayne’s directs with certainty and the whole piece is both uncomfortable and compelling, gripping and gleeful. The simple design from Anthony Lamble is very effective and Lily Phillips’ choreography perfectly complements and enhances the work.

Jason Carr provides some delightful music. Simple, almost naive, tunes are weaved effortlessly into this most manly of theatrical works and serve to relieve tension, promote a sense of unity and in some case, like the Medication song, counter the intrinsic horror of the textual moment. But truly haunting was his composition about “re-living” which comes to grips with two of the key issues the play explores: the way ex-servicemen relive the experiences they have suffered and how they have to relearn how to live without the uniform. Magical.

People often ask me why I go to see so much theatre, as if it were a sign of madness. Perhaps it is, but the answer is simple: because every now and then you encounter something like this new play, which demonstrates the value, power and relevance of theatre and expands your understanding of the world.

Once again, this is something the National Theatre should be showcasing. Vital, important new writing and gifted performers. The question that should be asked is why isn’t the National supporting this real treat?