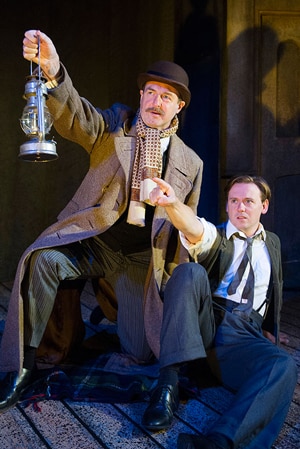 There’s nothing like a good ghost story to get the heart racing and give you a good scare. The Woman In Black has now been doing just that for twenty-eight years and it’s still managing to deliver the thrill of a well told ghost story night after night.

Based on Susan Hill’s novel of the same name, the play proved a surprise hit for the Stephen Joseph Theatre in Scarborough who were in need of a low budget play for their Christmas season. Little did they know their little little play would become one of the longest running shows in West End History having presented over 10,000 performances.

The Woman In Black takes Susan Hill’s novel and transforms it to backstage at a theatre where Arthur Kipps is seeking help with the telling of a tale. He enlists a young actor to help him make a presentation, hoping that in the telling his demons will be dispelled and a horrible weight lifted from his soul.

It’s a tribute to Stephen Mallatratt, that in the adaptation to the stage, the play becomes a wonderful evening’s entertainment with scares aplenty. It lures you into a feeling of safety before scaring the wits out of you.

As the young actor Anthony Eden is entirely credible. His enthusiasm for the task of adapting Kipp’s text is palpable, his energy boundless.

Julian Forsyth takes on the role of Arthur Kipps. It’s a role that doesn’t quite come into it’s own til halfway through the first act, when Kipps starts getting into the process of adapting his text with the actor.

By Act Two, both actors are in their element, taking turns at narrating and bringing to life Eel Marsh House and the ghostly going on that occur there. Through simple staging, some clever lighting and some faintly gauzed scenes, the ghostly spectre of Alice Drablow is summoned and makes her appearance bringing forth screams and shrieks from the audience who have already succumbed to the wonderous story-telling.

To say more would be to ruin the experience that is The Woman In Black. I’ve seen the show four times now over the past ten years and am encouraged by the quality and continuing high standards maintained by the cast, crew and producers. Robin Hereford’s direction is still fresh and his continuing involvement with the show helps to maintain the high quality that audiences enjoy night on night. It’s great to be in a theatre where the audience is full of nervous chatter and wonderment at the interval and raving about the show at its conclusion.

Having run now for nearly thirty years, and with a successful film version starring Daniel Radcliffe released in recent times, there is an entirely new audience experiencing The Woman In Black on stage. On the night we attended the audience ranged from thirteen to eighty years of age, each responding with glee as the tale unfolded and the scares started.