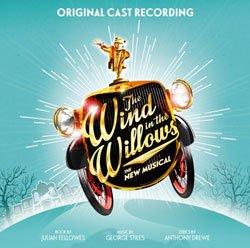 Kenneth Grahame’s The Wind In the Willows is about as beloved as it gets when it comes to classic British literature. The gentle tale of Moley, Badger, Ratty and that glorious riverbank and of the impetuous, garish and self-important Mr Toad and his foibles is the perfect basis upon which to base a musical.

Here that task has fallen to award-winning duo Anthony Drewe and George Stiles, who more than most have managed to perfectly capture that quintessential Britishness which makes tales like The Wind In the Willows and more recently tales like Harry Potter just that little bit extra special. I speak here as an Aussie who proved to be an Anglophile from a very young age. It’s something that the British do so very well and it’s great to see that the musicalisation of this tale has been entrusted to the very best.

Rufus Hound takes on Mr Toad with verve and gusto, it’s a performance that vocally has all of the mania and craziness of this larger than life character. The Amazing Mr Toad and Mr Toad’s Escape give Hound a chance to go to town and really make Toad explode out of this recording.

Craig Mather makes for a delightful Moley. His solo A Place To Come Back To perfectly capturing the essence of this simple soul. Simon Lipkin’s terse Ratty is a perfect contrast to Moley’s innocence. Together Mather and Lipkin make magic, you can hear it in droves in Messing About In A Boat.

Denise Welch comes across as a very knowing, worldly-wise Mrs Otter. The number Speed Is Of The Essence gave me the broadest grin as she and Ratty (Lipkin) give poor Moley a schooling on Mr Toad. It’s moments like this and numbers that include Lipkin, Welch, Mather and the wonderful Gary Wilmot that give this musical the feeling of great warmth and fun.

As the Chief Weasel Neil McDermott and his band of slick and scary cohorts are in their element in The Wild Wooders. It’s equal parts scary and showstopper, you really couldn’t ask for more.

Some of my favourite moments with Stiles and Drewe come in their ensemble montages. It’s become something that they do so terribly well and Willows is no exception. The Greatest Great Escape, Hush! and The Fight are brilliantly constructed and beautifully executed.

Those familiar with Grahame’s novel will know that some of the most delightful moments come in the chapters that fill gaps between Toad’s rather grand adventure and so it is with the musical. Take a listen to The Hedgehog’s Nightmare gives Jenna Boyd, James Gant, Lauren Sayers and Harvey Loakes a beautiful moment where they very nearly almost steal the show. Its simplicity has a touch of The Sherman Brothers to it – just perfect.

Christopher Jahnke and David Shrubsole’s orchestrations are perfectly suited and together with Simon Lee’s musical supervision and the show band under the baton of Toby Higgins keep the pace lively and in synch with the drama.

George Stiles and Anthony Drewe just keep getting better and better with each show they write. They have successfully encapsulated Grahame’s classic characters and the very atmosphere of the Riverbank with this joyous musical.

All in all there are twenty tracks on this cast recording and there’s not a dud amongst them. I’ve not seen the show on stage as I’m not in the UK at the moment, so this review is purely of the cast album but I’m quite honestly looking forward to catching the show at the Palladium when I return as a result of this album.

GET A COPY OF THE WIND IN THE WILLOWS CAST ALBUM