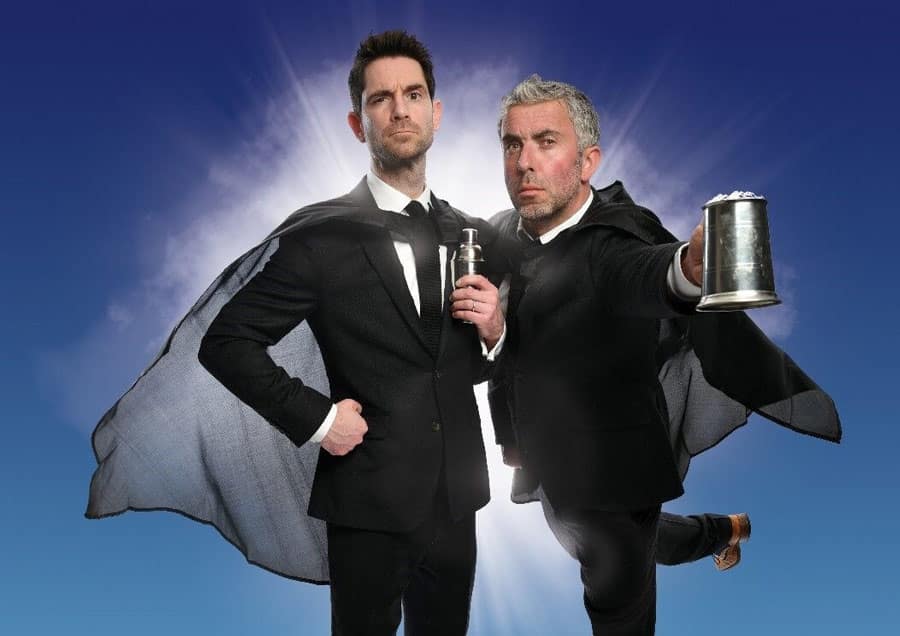 For nine years, The Thinking Drinkers duo Ben McFarland and Tom Sandham have been getting people drunk and making them laugh (not necessarily in that order) with their shows that combine drinks history with silly jokes and other tomfoolery. They are now back with a new concoction, Heroes of Hooch, which is touring across the UK until April next year.

From the moment they appear on stage dressed in inappropriately figure-hugging silver suits and red capes, it is clear they are sticking to the same winning formula. Under director Jeremy Stockwell, this year’s excuse for a show is to celebrate the heroes, and heroines, of drinking history, going back to prehistory but focusing on the past 500 years. These are the men and women whose great achievements were linked to booze rather than that guy who can drink 30 pints in one night without falling over.  People from all walks of life are drawn in, from scientists Tycho Brahe and Galileo in the Renaissance to explorer Ernest Shackleton, spaceman Buzz Aldrin and Alexander the Great to Chinese pirate Ching Shih, aviator Amelia Earhart and French dancer Louise Weber.

But they are not just serving up dry facts, especially as Tom and Ben’s energetic team hand out samples of five different drinks to tie in with the stories. This year’s line-up features historic Tetley’s Original ale, ruby-coloured Four Pillars Bloody Shiraz Gin, scotch whisky The Singleton of Dufftown 12-Year-Old, Diplomatico Reserva Exclusiva Rum from Venezuela and Grand Marnier cognac and orange liqueur. But while this makes their tickets very good value, their shows are not about getting drunk. These high-quality spirits, and the tasting guidance to accompany them, fit in with The Thinking Drinkers’ mantra of “Drink less, drink better”.

Nor is this just a show for facts and premium drinks, although you will pick up some useful trivia such as the root of the phrase, “Bury the hatchet”, or the famous composer whose heart was pickled in cognac. With elaborate costume changes, some gratuitous nudity and plenty of bad jokes, this is another funny and entertaining dip into the history of alcohol.