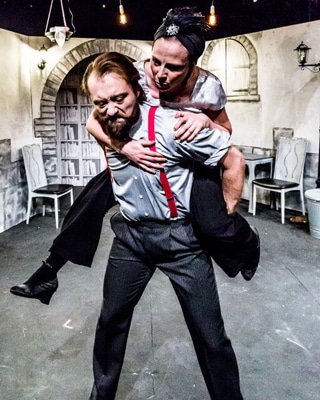 A ravaged, mouthy derelict with a can of beer was slumped outside the entrance to the New Wimbledon Studio when I arrived for the Press Night of this new production of The Taming of the Shrew. I thought no more of it until the same individual emerged in the theatre ahead of curtain up interacting rowdily with the stage manager, turning over a few chairs, and giving members of the audience minor grief. And then the penny dropped: the play had already started and we were in the midst not of a incident involving the police but a brilliantly improvised version of ‘The Induction’, the framing device for the play-within-a play that is this early Shakespearean comedy. As Christopher Sly, the toper to be placated and entertained, Christopher Neels gave us the first of many new and insightful glimpses into what has become more of a ‘problem play’ in recent production tradition, as opposed to one of Shakespeare’s lighter and frothy early works.

This play has a murky past. Dating from the early 1590s, there are two versions, whose relationship to one another and the exact contribution of Shakespeare to each remains a matter of scholarly dispute. The text is ‘foul’ in the literal sense in that it may derive from one of the ‘bad quartos’ derived from prompt copies and published ahead of the First Folio. Moreover, it has had a foul critical reception too, not least from George Bernard Shaw, who described it as ‘one vile insult to womanhood and manhood from first to last.’ And in recent years it has been decried from feminist perspectives that view the sustained confrontation between Petruchio and Katerina as impossible to perform full-on without irony or bracketing devices. To my mind, these arguments, together with the parallel ones over anti-semitism in The Merchant of Venice, can be over-played, and in some ways miss their target. We should recognize first of all that the fact that Shakespeare has made the Shrew a play-within-a-play means that he himself has placed a bracketing device around taking it with literal seriousness, and secondly that it is ultimately the choices made by the director and company that will determine our reactions to this text – it can be played ironically, farcically, or historically (ie as an expression of early modern ideas on social hierarchy and post-lapsarian man and woman). There are plenty of options available, and we need to suspend judgement until the final curtain.

Arrows and Traps and the director Ross McGregor bring us a gender-inverted version of the play as part of an intriguing season devoted to the theme of ‘Love in Time of War’. On the strength of this innovative and lively production, their takes on Titus Andronicus and All’s Well That Ends Well will be essential viewing later in the summer. We find ourselves in a simple, flexible set that functions well both for street scenes and interiors, with little time lost to scene changes. It is a long evening in time, but it does not seem so in pace, as the episodes zip past with commendable dispatch and economy, while allowing the few speeches of reflection and repose full weight. With the exception of the main leads each actor plays multiple roles and here we see the benefit of working with a regular core company who all know one another well and are at ease in flexible ensemble work. There is energy, inventiveness and fluidity about the progress of the action and a strong visual sense at work to create effective tableaus. This means that it does not matter that the budget is limited: for example, the chorus of timorous cooks and servants during the banquet scene is just so amusingly choreographed you forget that only the most minimal props are on display. This is Shakespeare where the values and focus are in the right place, namely a forensic re-thinking of the text, with an eye for how that vision may be best communicated with pace and wit of delivery and continuously eye-catching stage movement. There are also some charming sung interludes that emerge naturally from the play, in the best tradition of musical theatre, which serve to encapsulate the mood at several points in the action.

So what do we learn from gender-inversion in the play? What does it add to our understanding? Firstly, the edges are in some way taken off the confrontations, which seem somehow more humorous and less cruel. The jostling of the suitors is still catty to be sure, with excellent work in particular from Jean Apps as Gremia; the mothers bluster and threaten just as effectively as fathers would – here an impressive handbag-wielding Vincentia (Bridget Mastrocola) stands out. Bianco (Samuel Morgan-Grahame) is re-cast as a pampered and spoilt mummy’s boy, and Trania, (Gemma Salter), impersonating Lucentia (Remy Moyes) for much of the action, shines with flighty, comic invention. But the play stands or falls on the inter-play between Petruchia (Elizabeth Appleby) and Cajetano (Alexander McMorran). I felt that McMorran could have been even more difficult and unreasonable in his acting of the early scenes – the journey travelled from there to his fine, dignified and convincing rendering of the final ‘submission’ speech needs to be a long one, whether one regards him as a victim or not. But Appleby’s daffy and blithe portrayal of Petruchia was a complete comic delight. Her continual refusal to engage with Kajetano’s viewpoint and wishes had something of Jennifer Saunders in full Ab Fab flow about it. And then by inhabiting an alternative comic world for much of the play, her final acknowledgement of love was all the more affecting – and certainly the first time it had ever affected me. This leads me to my second observation on the inverted concept of the play – which is that the wit and competitive brio of the exchanges is in some ways above gender, and needs to be played with a kind of determined military precision of execution of the switchbacks of mood to carry the audience along with the joke and action in a sense of eager anticipation of what might happen next. I suppose it is another version of Noel Coward’s remark that comedy is at its most funny when played in deadly earnest…..

The problem I have always had in the past with this play is the sheer relentlessness of the ‘taming’ process, which has in previous productions I have seen just come over as tedious, rather than cruel, let alone funny. For that reason I have been more drawn in recent years more to the genial, urbane and seductive charms of Cole Porter’s version rather than to Shakespeare’s original. The best compliment I can pay this fine production is that it has made me think much more kindly of the original play and laid to rest many of my anxieties about the material. Do catch it while you can.

The Taming Of The Shrew runs at the New Wimbledon Theatre Studio until 20th June 2015.