Our very own TheatreCat Libby Purves reviews The Southbury Child now playing at the Chichester Festival Theatre prior to a season at the Bridge Theatre, London. 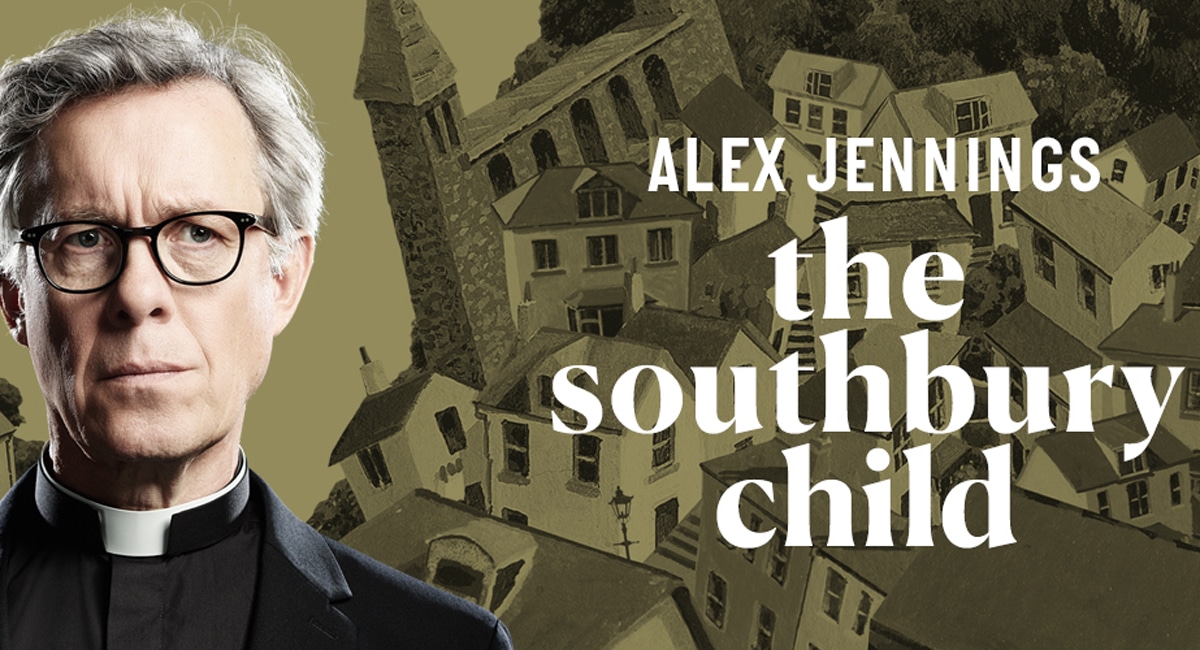 VIA MEDIA ANGLICANA IN A NEW JERUSALEM

We’re in  a vicarage kitchen in a small West Country town,  its incumbent dealing with parishioners, a resentful, weary wife and two daughters: Susanna is a dutiful verger and schoolmistress,   adopted African-heritage Naomi a cynical unbeliever who has come home from a struggling acting career and likes to scandalize the town in her  “Lithuanian prostitute” outfits.    It isn’t easy being an Anglican parish  vicar in an age of dwindling respect and attendance  (a sharp essay in the programme is well worth reading).  On one side he faces angry  sentimentality and scorn from council-estate unbelievers,  whose resentment drives the plot; on the other a smugger middle-class yacht-club agnosticism.  The latter is beautifully encapsulated in the doctor’s wife, Hermione Gulliford in gilet and jeans,  shuddering at “that morbid business with the cross at Easter”  and saying that her friends got married in a crop circle  because these days people “aren’t afraid to define their key moments” without clerical assistance.

It is a fine play, sharply written with some real  strong unexpected laughs and a heartstopping ending.  Its subtleties of character ask a great deal (not in vain) from the cast.   Nicholas Hytner, who takes it onward to his own Bridge in a few days,  once programmed Stephen Beresford’s subtle, mournfully Chekhovian debut  THE LAST OF THE HAUSSMANS at the National: he curates  this new one himself with thoughtful care.   It deserves it:  as a reflection on England (not Britain) Beresford’s  dry  observation and undercurrent of poetic yearning place the play fascinatingly alongside JERUSALEM, albeit with piquant differences of tone.  To me it feels like an equally important one: those who deny that will likely do so because of its gloriously unfashionable setting and hero.

That hero is David Highland,  evoked beautifully in every line and gesture by Alex Jennings:  a moth-eaten, visibly flawed Anglican vicar fighting not only the retreating tide of faith but his own drink habit, the shame of an aborted affair (“rules for vicars: don’t fuck the flock”),  and the rebukes of a pompous offstage Archdeacon (“Angry? We are never angry in the Church of England. We are “grieved’”.  Ouch). His dry humour and humane warmth recognize absurdities but he holds to integrity in matters of ritual,  and the way that centuries of tradition have grown it to assuage and accept the deep terrible realities of death. His best moment of the year is the “Blessing of the River” when the fishermen who live and work close to those realities do, just once every year,  respect the processional prayer he leads.

Liberal audiences may boggle when, as the first act develops, we learn which  particular hill David seems prepared to die on – or lose his living and his home on –  as the diocese sends a brisk young gay curate to sort him out.  The Southbury Child of the title has died from leukaemia, leaving a skinny waif of a single mother, Tina, and her brother the  rough-cut, troubled, vulnerably manipulative uncle Lee.  The family want the church full of balloons and Disneyiana – “a celebration of  her life”. David refuses:   death is real and funerals are there to serve grief, not neutralize it.  “Death isn’t about Disney”.

“So so happy ending?” says Lee.
“No EASY ending” says the clergyman.

The row over balloons magnifies, all classes uniting against him: a babble of voices offstage between scenes and the arrival of the (beautifully drawn) pregnant local cop Joy suggest a potentially ugly denouement.  That doesn’t entirely happen, though with the assistance of the Book of Common Prayer  Alex Jennings’ final lines did make me actually cry,  all the way to the car park in the dusk.

There are fine performances, sketched with lightning skill in short scenes: Racheal Ofori as red-hot Naomi and Jo Herbert as her dutiful sister  each test their difficult identities on Jack Greenlees’  wary curate, and the final appearance of the bereaved mother Tina is explosively moving.  Josh Finan’s Lee in particular is wonderful:  seething with hopeless underclass rage but with a real connection to the vicar in whose untidy kitchen he is seen either yielding to distress, shame or malice or simply dropping unforgettable philosophical theologies like “Why is there anything?” and “If Henry the 8th had kept his cock in his tights, we’d all be Catholics anyway”.

This was Chichester. I very much want to see this play again, at the Bridge, and feel around me an audience probably more urban, more smugly agnostic. Will report.
cft.org.uk to 25 June then in London  1 July-27 Aug

FIRST LOOK – The Southbury Child at The Bridge Theatre