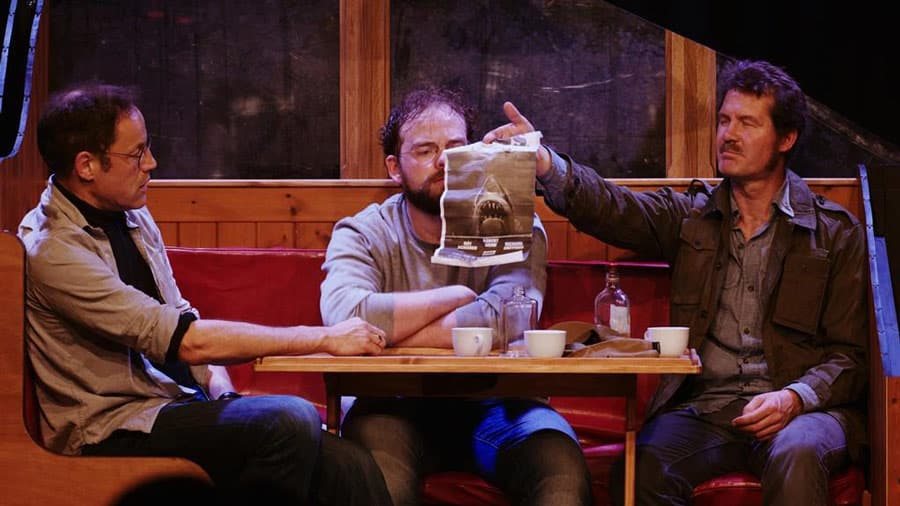 Guy Masterson has given so many excellent productions to the Fringe, and here is yet another production of high quality acting and presentation. This is highly original, and features a cultural icon that we all know and love! It’s 1974 and Shaw, Dreyfus and Schieder are trapped filming a movie that they have little faith in because the mechanical shark keeps breaking down. Yes, it’s Jaws, and this wonderful play gives a sharp, hilarious and poignant insight into Hollywood and fame.

The play is given such insight because one of the co-writers, (along with Joseph Nixon), is Ian Shaw, son of Robert, who plays his father in this production.  As he acknowledges in the programme, especially with a moustache, he looks amazingly like his father did playing Quint, and he is truthful in playing the father he loved, despite his flaws, alcohol being one of them. But the excellent casting is also evident in Duncan Brody as Schieder/Chief Brody and Liam Murray Scott as Dreyfus/ Hooper. As the shoot goes on and on and the shark machines continually break down, the men bicker, gamble, fight and reflect on fame and their lives. Shaw and Dreyfus continually clash, the older actor cynical about his profession, missing his family back home in Ireland, feeling his work is unworthy, clashing with the younger actor’s ego and need for fame. The peace keeper is Schieder, the voice of calm and reason, and also -wonderfully- quite boring!

Written with hindsight, of course, the play has hilarious discussions  about Jaws and cinema, they all expect the film to flop when it became the first “official” summer blockbuster, changing the industry forever. Dreyfus says Spielberg has spoken to him about his next movie, which will feature friendly aliens, (Close Encounters of the Third Kind), and Schieder says there can’t ever be a sequel to Jaws and even if there was, he would never do it. (He did!) But it’s Shaw who touches your heart, especially when, as Robert, he talks of his father dying. He clearly is remembering his adored father, and his speech, as Quint, which ends the play is a wonderful tribute. Beyond that, the play itself is a tribute to Hollywood and the magic of cinema. Add in snatches of THAT score, and you may find yourself watching the film itself not long after!