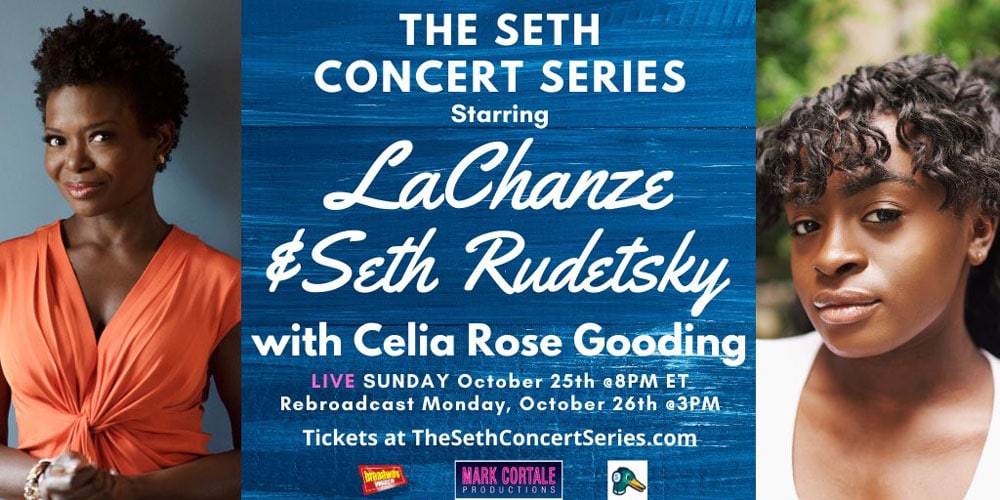 Warmth and a point of intimate connection are surely the two vital ingredients in creating a cabaret: and this is what Seth and his guest this week, LaChanze, poured into our ears with the first number in what soon transpired to be the very first encounter of these two remarkable people.  And what this lady was going to give us, it seemed from the outset, was a strong sense of who she is and what she is about.

‘Believe In Yourself’ from ‘The Wiz’ seemed a natural choice for the second number in the gig, and it got a splendiferously majestic performance here, making it another Charlie Smalls colossal achievement.  The pace was then picked up by a whirlwind tour of the International (and US National) Tour of ‘Dreamgirls’, a show that took her to every state in the union in a no-fancy-stuff, bus and truck tour.  At which collaborative point, Seth stepped in as a particularly helpful MD, acting and singing out the SEVEN other voices in ‘It’s All Over’, an operatic argument in music (Henry Krieger, Tom Eyen) from that show.  LaChanze had a different sound in her voice again for this intensely charged, aggressive encounter, which just exploded out of nowhere and was so absolutely spot on.

We then moved into the musical that started little and grew really, really, really big!  ‘The Color Purple’ is, in its current ‘revival’, still amongst the brightest jewels in the temporarily stolen crown of Broadway.  But before dwelling longer in the company of that triumph, we included a revisit to ‘I Don’t Know How To Love Him’ from Lloyd-Webber/Rice’s ‘Jesus Christ Superstar’.  And thence to… ‘Once On This Island’ (Ahrens/Flaherty) for a palpitating ‘Waiting For Life To Begin’, with Seth and her daughter, Sonya, filling in with backing vocals.

And then we got to a tricky show, ‘The Bubbly Black Girl Sheds Her Chameleon Skin’ (Kirsten Childs), a show about show business, which is never easy to pull off, especially when the show has a huge personal agenda behind it – as this one does, but the work is stunning: ‘The Skate’ given here in a bravura display of contrapuntal virtuosity that still dazzles like brand new paint.

Seth makes a little joke next: ‘I’m going to give you something a little easier to sing. Jason Robert Brown’.  But soothing relaxation came our way immediately in his ‘Another Life’ from ‘The Bridges of Madison County’, perhaps the most seductive and charming score by this notoriously challenging writer for the acting and singing voice.  In the accompaniment, Seth showed again and again how he judges touch and attack with gorgeous mastery: when he is at the keyboard, he seems to be the whole orchestra and to be conducting it as he goes along, there is an independence in his musical expression that is totally at the service of the music: collaborative generosity like this is so difficult to achieve, making it rather rare.

Into this mix came the social message: LaChanze has a charity, ‘BlackBeautyUnited’ (I hope I heard that correctly), which has its mission to improve lives beyond the shallow glamour of Broadway glitz.  She also does a great deal of TV and runs her own ‘Workshop’ that reaches out to audiences in a different, empowering and coaching type way.  You can never do too much?  Indeed.  Like, acing ‘Another Hundred People’ from the 1995 revival of ‘Company’, in which she did her bit for breaking down racial stereotyping, by really working the ‘truth’ of the number, playing it like an actual journey on the New York subway.  Sondheim was impressed at her audition and another Broadway role broke through the shackles of uninclusive casting.

But singing is what makes it happen for LaChanze: in another firm favourite of this show, ‘Your Daddy’s Son’, from a further Ahrens-Flaherty show, ‘Ragtime’, captures once again the joy and pain of life, inseparably mixed.  From there, it is but a short step to Donna Summer and ‘She Works Hard For My Money’ has, in her handling, the rapturous, barking quality of a gospel revival meeting, inspired, exuberant and exultant.

How different, against that, sounded the delicate lyricism of Brian Yorkey and Tom Kitt’s ‘If/Then’, making a perfect 11 o’clock number to this show, before we merged gently into the blockbuster chat about ‘The Color Purple’.  Brenda Russell, Allee Willis and Stephen Bray get to the heart of the matter of Alice Walker’s vision of amor vincit omnia in their number, ‘What About Love?’ for Celie and Shug.  LaChanze pointedly observes that the show doesn’t communicate the particular lesbian character of their relationship, so much as the beauty and the commitment of their love, ‘Which is what it should be about’, she says.

As ever, the Seth Rudetsky roadshow – stuck in a single room in New York City ONLY in the literal sense! – took us on yet another great journey.  At the end of 90 minutes of which, we come to rest, marvelling at how much distance we have travelled and what we have experienced, all through the staggering artistry of this great figure from the Broadway stage.