Kicking off with ‘Beautiful’ (Carole King) the husky, sexy, rich mezzo of this rock goddess of the stage, Jessica Vosk, launched the programme, and the series, with a confident flourish into this shiny, new ‘Biden era’.  Classically trained, hugely active and ambitious as a youngster, this Jewish-Polish singing actress is the epitome of what American musical theatre is all about.  Listen to her sing the Gershwin’s, ‘Someone To Watch Over Me’, and you’ll find out: technique here is all that it should be, could be, but it never – ever – gets to upstage the story, mood or sentiment.  As ever, key here is the endlessly varied colouring of the vowel sounds, where the emotional expression is at its most compelling – from the purest, most exquisitely supported, most glowingly round tones, through little catches of vibrato and in and out of almost dangerously exposed diphthongs.

Yes, we are not afraid to talk technical on this show.  Why?  If you ain’t got technique – and heart, you ain’t gonna be like her.  I mean, if not, then you’re going to end up sounding like one of those singers that ONLY have the ‘machinery’ of their voice to serve them, and always fail to touch the soul.  (And let’s not talk about them.)

For instance, a song like, ‘I Don’t Know How To Love Him’ (Andrew Lloyd-Webber/Tim Rice) – which was next up – is a great example of what you can do if you make a strong, clear, and absolutely consistent decision about whose the voice is that we can hear: a rougher, earthier, edgier sound than we’ve heard till now.  And – if you listen to the story she tells, of trying to ‘fit in’ as a good Wall Street drone, busily earning her way to a Scarsdale villa, and hating it – this is in no small measure due to her capacity for breaking out of the confines of conservative expectations and bourgeois respectability.  The story she has to tell, in other words, is really one of revolt and insurrection.  (But, unlike Trump’s, this one was successful.)

Next up: Pasek and Paul’s, ‘A Million Dreams’ from ‘The Greatest Showman’.  What a nice song, but what an even better proof that musical theatre actually does write the score to accompany such lives of passion, commitment, belief and – the clincher – consummate artistry.  In fact, when you hear Vosk sing this, you can actually ‘see’ her doing this number on stage: there is such an inherently dramatic conviction in her splendid voice.

And then we got a dose of Disney.  A Disney princess, at that.  Well, a princess-oid, at any rate: and this was, well, I suppose Alan Menken territory.  Who else writes all the music for that franchise?  In her hands, ‘Part Of That World’ (lyrics, Howard Ashman) becomes a pretty ‘I want’ song for any bright, enthusiastic, hard-working Jewish girl turning up in Manhattan, sitting in a diner and staring out at the buzz of New York City, dreaming over her ‘coffee and…’.  What’s it got it do with mermaids?  Well, the last time I checked, there are no mermaids in this world, but there’s a whole lot of people in New York. 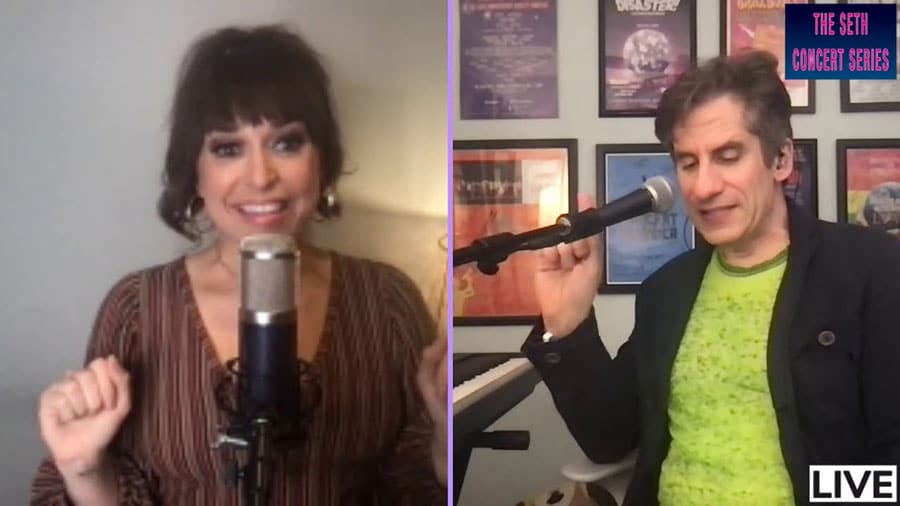 That is what musical theatre is all about: the can-do, let’s get up and do it frame-of-mind that sees our Jess switching her talents into social and political causes, like LGBTQ rights, and more.  Echoes of this engagement – resonating ones – sound all the way through one of the iconic scores de nos jours, Stephen Schwartz’s ‘Wicked’.  So we got a blast of that, before grinding the urban gears into the West Side for a slab of Anita telling her part of that particular ‘Story’ (Bernstein/Sondheim), which in turn took us all the way to Jason Robert Brown’s most lovely, most lyrical music and words in, ‘The Bridges Of Madison County’.  But, instead of hearing from that, we got ‘I Can Do Better Than That’ from another of JRB’s endlessly fascinating shows, ‘The Last Five Years’.

How different, how very, very different is Elton John and Bernie Taupin’s first massive hit, ‘Your Song’.  Jess tells the tale of growing up in a house filled with the music of the Seventies – an era with which Rudetsky is equally in love.  More upbeat stuff followed, and then we got, ‘Another Hundred People’ (Sondheim, from ‘Company’) from this girl who just has the traffic of New York City thundering in her veins.  And when she sings like this, then we’re right there, too.

‘Did that really just happen?’ she asks next, in another smash hit from ‘Wicked’, ‘When I Meet The Wizard’.  Well, I guess it did.  And wasn’t it great that we were there when it did?

Read other reviews from The Seth Online Concert Series here