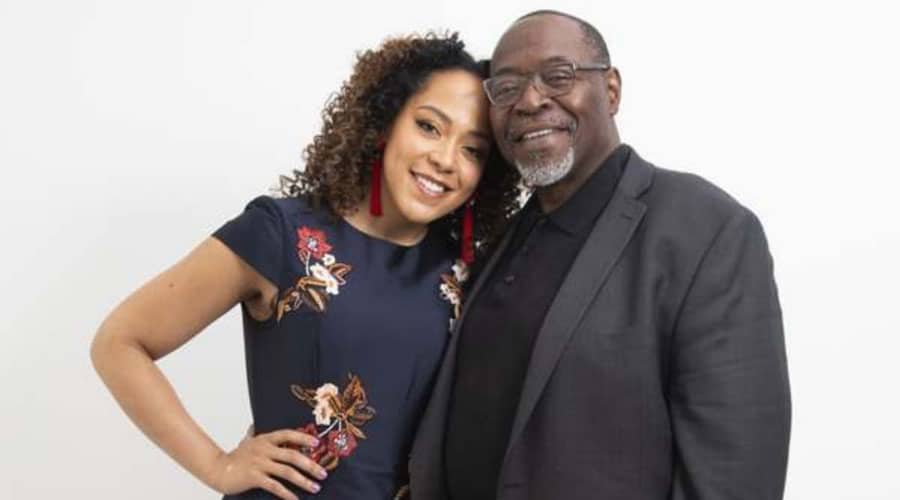 The names ‘Chuck and Lilli Cooper’ may sound like the warring couple at the heart of Cole Porter’s ‘Kiss Me, Kate’, but they are in fact other off-shoots of that Great White Way, the father-and-daughter pairing wheeled out for our delectation in Seth Rudetsky’s latest online cabaret-chat-show this damp, windy May evening.

Well, the big news about today’s show was: the mic stand was gone, and hand-held mikes were back in vogue.  Ah, so.  This could mean… anything.  ‘Wherever He Ain’t’ (Jerry Herman) was Lilli’s opening hand-held salvo from a former gig of hers, ‘Mack and Mabel’.  Chuck picked up this energy and, with a shakier voice than hers at his disposal, wrapped it up in the warm cellophane of the title song from Kurt Weill and Maxwell Anderson’s ‘Lost In The Stars’ (a very welcome 1949 novelty in a show that sometimes struggles to remember anything earlier than 1950).  So, I guess both of those numbers had something to do with getting away from it all: one way or another.  Could this be the direction the show was going in?

If escape was a proto-theme that suggested itself to the performers, they gave nothing away.  We marched boldly through a little bit more personal anecdote, and then Lilli was back, with Lorenz Hart and Dick Rodgers’, ‘To Keep My Love Alive’ from their 1943 reworking of their even earlier, ‘A Connecticut Yankee’.  A hymn to misanthropy and casual homicide, it seemed to do nothing more than point to some dark forces at work in this week’s show.  How fascinating.

Connors, Snr., was vocally on much securer territory with ‘Your Feets Too Big’ (Fred Fisher/Ada Benson, from 1936… the man can come again).  As pictures of domestic discord go, this painted a much less traumatising picture than its predecessor had, and doubtless allowed us all to sleep easier in our beds tonight.  Back to Lilli.  (By this stage, I was wondering whether they were playing ‘bad cop/good cop’?)  And she turned our escape oriented mood towards the musical, ‘Hair’ (the lyrics of which she never quite mastered), and thence to the grim, sombre miseries that are the people of, ‘Spring Awakening’ (Duncan Sheik/Stephen Sater).  Seth usually gets fairly juicy gossip out of survivors of this show, as regular patrons will attest, so we listened on the edge of our seats.  But all  we got was a repeat of a previous story.

Was this a deliberate choice or had her researcher fouled up?  Not easy to say.  Meanwhile, the inky waters of ‘The Dark I Know Well’ from said teenage angst-fest poured into our ears.  Seth played the three chords that support her chanting voice with complete conviction.  But, when – as Lilli has – you get kids coming to the stage door after the gig, telling you that the show has helped them come through a history of family abuse or suicide attempts, then you do see theatre in a whole different way.  Ultimately, it all boils down to knowing one’s own worth, she summarised firmly.

Meanwhile, Chuck was taken back to his part in the unusual, ‘Caroline, or Change’, by Tony Kushner.  The show had a long gestation, including a fascinating early performance for an audience of one – George Wolfe – a performance that was made all the more wonderful for having the actors improvise the musical sections.  Jeanine Tesori eventually came into the team to produce the music and created what is – to my mind – the score of an opera that just happens to use the vernacular of (all kinds of) popular American music from the 1940s-60s.  Rather like Janacek, the musical contours remain ultra-faithful to the rhythms and patterns of natural speech, and fragmentary bursts of one style smash into and collide with those from others.  This is music that goes to places where most other scores do not dare to tread.

Thus, he began with a kind of southern keening, groaning into gospel, with ‘Gone For Good’, in a number for The Bus, a role Cooper played, winding up the number into a requiem for the assassinated president, JFK.  Serious stuff.  We might have stayed with that mood for while, but – no – we had to rush into the giddy froth of ‘Tootsie’ (David Yazbek/Robert Horn), and Lilli’s Tony-Nominated Turn as Julie, singing ‘There Was John’, a tidily written number that sounds like something you might have heard decades ago.

Next, Chuck told us his How-I-got-to-meet-Hal-Prince story: it included a discussion of Paul Robeson’s improvements to Oscar Hammerstein II’s lyric to, ‘Ol’ Man River’.  And then he got the part at Tevye in Bock and Harnick’s ‘Fiddler on the Roof’.  An interesting conflation of a black artist changing a WASP American’s lyrics for a black character singing in a musical version of white author’s novel about racial tensions in antebellum USA, in order to audition for a Jewish producer to be cast as a black lead in the seminal musical of Jewish oppression in pre-revolutionary Russia.  Still with me?  America: it’s the melting pot.  Cooper made, ‘If I Were A Rich Man’, his own.

Then it came to our weekly ‘fix’ of ‘Wicked’, and The Great Schwartz’s, ‘The Wizard and I’.  Lilli did it stonking.  Chuck then got to tell us a wee anecdote about casual racism in Macy’s department store (Macy’s was not approached for comment), before tipping his hat to the Gershwins’, ‘It Ain’t Necessarily So’ from ‘Porgy and Bess’.  Lilli and Seth joined in with the scat-chorus.  Once again, his voice was on top form with this kind of repertoire.

Finally came a pair of duets: the first from the never-before-heard-on-this-programme (irony), ‘Little Shop of Horrors’ (Alan Menken/Howard Ashman), and ‘Suddenly Seymour’, with Seth doing the other voice – rather well.  Then we tip-toed gingerly into the murky world of ‘The Life’ (Cy Coleman/Ira Gasman): ‘I’m Gettin’ Too Old For The Oldest Profession’, done to perfection by an inspired pairing, drawing doubtless on their personal back-story, living in the USA as black people.

Not too old for us, however hard and long that job may seem, in a show that – while not without tensions and seeming contradictions – said plenty enough to keep us all thinking, as well as feeling.