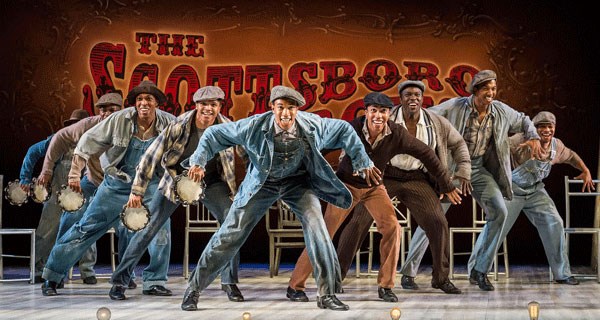 There is something intoxicating about a John Kander score, no matter which score it is. There are the golden hits (Cabaret, Chicago, Curtains) and the near-misses (Kiss of the Spiderwoman, The Act, Woman of the Year, 70 Girls 70, the Act, The Rink, Steel Pier and Flora The Red Menace) and the real misses (Zorba) – all of which were written with the late Fred Ebb. When Ebb died, one of their joint unfinished works was The Scottsboro Boys, now playing at the Young Vic in a production directed by Susan Stroman, who was an original collaborator on the piece.

The original production, at the Vineyard Theatre off-Broadway, showed the power and potential of this remarkable piece of musical theatre. But it was flawed and needed revisions.

Startlingly, those revisions have not occurred with the result that this cannot be greatest work in the Kander & Ebb canon – and yet, so clearly, it could be.

The subject matter is the most serious, most disturbing, most horrifying subject matter of any Kander & Ebb work: even the darkest moments in Cabaret are light compared with this tale of White American prejudice against the American Negro, of a judicial system so flawed as to be pointless for some of those seeking its protection, of a way of life, incomprehensible prejudice against a particular minority, which seems now so appalling in terms of White and Black, but which so recently was not thought of that way – and yet, which, in different contexts (the prohibition on same sex marriage, Iran, Africa, Korea, and even, still, some large swathes of America, Australia and Europe in their dealings with minorities) still has a, sadly, profound resonance.

Two white women, to cover up their own indiscretions, accuse nine completely innocent, and quite naive, black youngsters with rape. The white women are believed and the nine boys imprisoned and sentenced to death. Juries, in trial after trial, even when one of the women recants, condemn the boys – simply because they are black. It’s as horrific a tale of undisguised prejudice as the one in Parade – yet, because of the treatment here it does not seem so.

This has nothing to do with the cast, who are exemplary and outstanding. The nine boys are, in an unqualified way, magnificent: the line-up here is better than the Vineyard line-up. Each of the nine can sing, dance and act. They are simply tremendous: with special, remarkable turns from James T Lane (seriously, just get the awards engraved now), Kyle Scatliffe, Clinton Roane and Carl Spencer. When they all sing together, it is unarguably thrilling.

But there are four other roles and it is the conception and realisation of those roles which produces the shudders of confusion and the lack of precision.

Again, this is not to do with the performers themselves for the most part. It’s the idea. It’s a simple one, and in other stories, might have worked very well. In a kind of parody of the “Black Minstrel” shows which were once so popular, the evil white folk are played by black actors, in exaggerated vaudevillian style. The ambivalent, kind and “understandable” white characters are grouped into one – the Interlocutor, curiously, a much older man than anyone else in the cast – played by Julian Glover, who is sturdy of voice and attitude, but frail in stature, so frail that at points one wonders if he will make it through the night. Then there is a mysterious woman who appears constantly throughout the unfolding of the tragedy, but with no discernible purpose, until the final scene where she becomes Rosa Parks, and thereby becomes the embodiment of the defiant spirits of the Scottsboro Boys, particularly Haywood Paterson.

The two Vaudevillian characters – Mr Tambo ( Forrest McClendon – exquisite) and Mr Bones ( an over-the-top Colman Domingo ) – do precisely what is asked of them – every stagger, every show- off moment, every dance and joke – but there is, alas, no getting away from the almost certain truth that if these roles were played by white performers, the sting would be greater, the horror more profound, the irony more piercing. Not because white performers would be better; just that their skin colour would simply change everything and work as it’s own reverse Minstrel conceit.

And, let’s face it, almost all the great numbers Kander & Ebb wrote were for women – and that loss of the female vocal line is aching here – especially when there is space for one woman, at least, to be present in various roles – various mothers, perhaps one of the rape “victims”, perhaps the spirit of justice itself.

And then there is the Interlocutor – if he is white, why is he white? Why is he not black like everyone else?

But these issues are conceptual, directorial: and, in truth, they do not really stand in the way of the piece achieving great heights. The cast see to that, despite too much shouting (in word and song) occasionally.

Stroman’s choreography is masculine, exciting, evocative and effective and there is nothing to complain about in either Beowulf Boritt’s design or Toni-Leslie James’ costumes; and Robert Scott’s musical direction is mostly inspired, although there could easily be more light and shade, softness and quiet clarity in the vocal performances.

It’s terrific stuff, this show, and another gold star for Kander and Ebb – but with a slightly more visionary director, it could be their ultimate number one hit!

The Scottsboro Boys transfers to The Garrick Theatre this October.