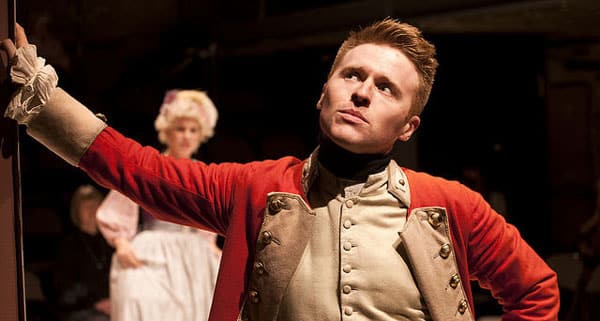 Productions of Sheridan’s two great plays, The Rivals and The School for Scandal, seem less frequent these days, which is a great pity given the wonderful range of opportunities each play provides for high-quality stagecraft of all kinds for actors covering the full age spectrum, with roles of equal weight and wit for men and women. When all Wilde’s plays, even his lesser ones, receive regular outings, it is puzzling that these two masterpieces, so similar in their stylised challenges, are much less visible. It is therefore very welcome to have the opportunity to salute a very fine new version of Sheridan’s first major success, still running for a few more days at the Arcola Theatre, Dalston. Do catch it while you still can….

The Rivals is not a perfect play. It flopped when first produced in 1775, and even after substantial cuts and rewrites the second half can drag. Much of the plot has been unravelled at that point, and audience attention can wander if the text is not performed with pace, and a great deal of inventive stage movement and business. Productions can also easily be too comfortable, treating it as a costume drama providing a star vehicle for the actors playing Mrs Malaprop, Sir Anthony Absolute, and the two sets of couples whose manoeuvres around, away and ultimately towards each other provide the main business. Yet it should be an edgy play that only finally and reluctantly settles into a match-making rhythm.

Constant eruptions of anger, sexual frustration, discrimination of town against country and English against Irish, and hostilities of son against father, servant against master and mistress run as a guiding set of threads through every scene; and assorted categories of gendered vanity, both misogynist and misanthropic, provide the root of much of the humour, some of it still unsettlingly cruel and mocking. It was the crudity of the play not its refinement as a comedy of manners that dominated its original somewhat scandalous reception; any production needs to capture these qualities if it is to make us look at the play again.

It is greatly to the credit of the cast and creative team that they have the courage to resist updating the play for the sake of novelty and instead dig deep into the text for new and persuasive answers.

Director Selina Cadell writes in the programme that ‘actors today are very used to imposing mood upon content, their relationship with language being far less secure. The challenge for the actor in Restoration Comedy, therefore, is to find out how the character exists through the language and the language alone.’ Instead of a spurious naturalism they embrace the challenge of finding nature in artifice as if it were already Wilde’s ‘trivial comedy for serious people. The actors play their roles in deadly earnest and the humour is naturally all the greater for it. Moreover they find exactly the right pace for the text by not rushing the delivery of Sheridan’s beautifully crafted speeches. Riding those long sentences, with their accumulation of balancing and qualifying clauses, requires skill like that of a surfer on the crest of a breaking wave…hold back too far and you lose the audience; gabble the sequences and you miss the punchline.

Each of the cast here was exemplary in taking their time when needed and moving on the pace when the scene required dynamism and physical interaction. By trusting the language on the page and developing character carefully through it the pay-offs were all the greater in the final scenes when the plot impetus slackens: such detailed performances deliver a humour of their own by that stage. Each actor realised that in an era where touch and human contact were restricted and formal, language in its full spectrum from delicate wit to bold bawdry has to play out the range of emotions, frustrations and jealousies that in a modern play would be indicated by body language. It is and was perfectly acceptable to break down the ‘fourth wall’ frequently and remind us that we were in a play, which was how an eighteenth-century audience viewed this experience, but for this to work the language needs to be treated with utter respect and played for dear life. It was a rare pleasure to hear text delivered with such assurance and sheer three- dimensional enjoyment of its imaginative possibilities.

There are no weak links in this finely honed cast and it is inevitably unjust to single out particular performances. But for their technical skill in making us think afresh about a familiar text, I must praise Iain Batchelor’s Jack Absolute and Nicholas Le Prevost’s performance as his father. By threatening anger but failing to delivering it until the point where you don’t expect it, Le Prevost gave a masterclass in comic timing; and Batchelor filled out every aspect of his multi-faceted role as Captain Jack and Ensign Beverley with debonair invention.

Gemma Jones frothed and fussed effectively as Mrs Malaprop, a puffball of grey silk and pink tulle, and deserves credit for NOT flagging up her creative use of language too obviously. ‘The pineapple of politeness’ found its place as the culmination of a wonderful paragraph not as an isolated joke.

Jenny Rainsford languished elegantly as Lydia with more bite and fight in this role than is usual, and Justine Mitchell was a model of quiet yet precisely understated restraint as the much-put-upon Julia. Adam Jackson-Smith played Faulkland as if he were John Cleese, which helped give us a useful point of reference for the character’s tiresomely self-sabotaging scruples.

The stock roles of the Irishman and the country farmer new in town are less well developed in the writing, but were well taken on the night. All the servants took their moments of intervention and commentary with panache.

If I had a cavil then it lay with the staging. The Arcola is an awkward shaped space, and needs very careful handling if scenes are to flow easily into one another (as was done so well in the recent production of Carousel). Here there was a little bit too much business between the scenes, whether in moving scenery (e.g. an unnecessary cut-out of an urn raised and lowered to indicate an outdoor scene), or in musical interludes or running gags. In a play which is as long as this and where the delivery of the language was so right, it was a shame that the scenes could not have flowed more seamlessly and especially in the structurally weaker second half. While it is set in Bath in fact, we do not need to see Bath in deed, or at least not to any elaborate extent.

However, this point to one side, this production is a memorable and thought-provoking take on an old favourite and one of the funniest evenings out at the theatre currently in town. You don’t have to agree with my ‘derangement of epitaphs’, just don’t miss it….