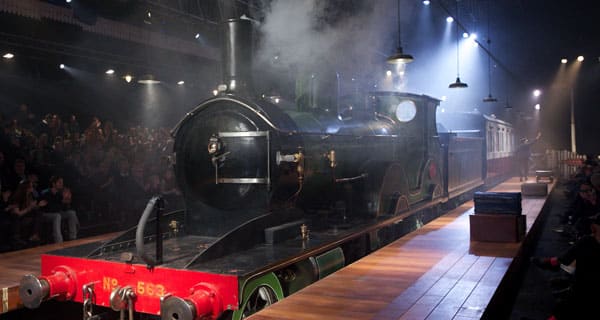 I approached this production of The Railway Children knowing that I am most likely in the minority of people who have not read the book by E Nesbit, nor had I seen the 1970 film, which starred Jenny Agutter.

Everything about this production at the purpose built King’s Cross Station Theatre is very special indeed. Whereas past productions of The Railway Children were held at Waterloo Station, this is a purpose built theatre that has been well thought out and provides an environment that is intimate whilst allowing an enormous steam train to roll on stage effortlessly. There is a large fully appointed railway station waiting room, seating in the auditorium is comfortable with most of the audience being incredibly close to the staging area.

Prior to the show and during interval, cast mingle with the audience, children especially are made to feel welcome and are encouraged to be part of the show. Children sitting in front of me were enchanted by such close quarters involvement in the show and lapped it up. There’s an enormous sense of shared experience going on in the audience for this show. All around people were laughing and reminiscing about their experience with the film and the book. That shared experience and cast interaction went a long way to create an atmosphere that took hold long before the performance proper began.

Told from the present looking back, the three “Railway Children” – Bobbie, Peter and Phyllis

provide a clear narrative that cleverly allows adult actors to take on the majority of the responsibility of driving the show without detracting from the show itself.

When their father is wrongly imprisoned for espionage, a family is forced to move from their well-to-do life in London and live in Yorkshire. Without means, the family adapt to survive and the children find friends with local stationmaster Mr Perks, and an Old Gentleman who comes to their aid.

Jeremy Swift is perfectly cast as proud Yorkshire man and station-master Mr Perks, who befriends the three children. Swift and Moray Treadwell as The Old Gentlemen provide the adult influences for the children. The performances of the night though go to Serena Manteghi (Bobbie), Jack Hardwick (Peter) and Louise Calf (Phyllis), casting adults to play children is always a tricky solution to casting, but these three actors make the adult-child transitions believably. The whole cast deliver assured performances in this space. Sound designer Craig Vear ensures that all of the dialogue can be heard above the fabulous soundscape of the railway station that has been created.

The staging of The Railway Children is nothing short of incredible. Large staging areas glide effortlessly up and down the stretch of track that divides the auditorium. They move transporting cast and creating playing areas allowing the action to play out effortlessly. Director Damian Cruden and Designer Joanna Scotcher have created a playing area that is intimate and yet manages to bring the biggest theatrical prop in existence on to the stage. It’s an extraordinary feat. The pace of this piece is incredibly important and cast and creative alike insure that the play moves along never allowing audiences to get bored. Kudos must go to the small team of track engineers who move the platforms with military precision.

Of course, most of us are intrigued by the producers claims of having a real steam train on stage and it makes an appearance several times. It was great to see children and adults alike sit open-mouthed and wide-eyed as the London and South Western Railway Locomotive 563 came on stage. One audience member sitting next to me assured me that the train was an elaborate prop and was not real. The look on his face as one of the venue staff assured him it was real was a sight to behold.

BOOK NOW FOR THE RAILWAY CHILDREN AT THE KINGS CROSS THEATRE