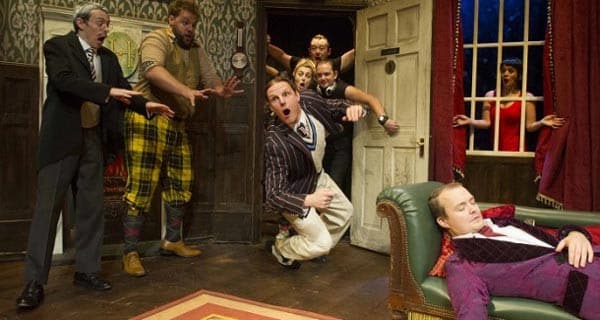 A member of the audience has been brought on stage to help two hapless stage technicians to prepare for the imminent presentation by the Cornley Polytechnic Drama Society of Murder At Haversham Manor. It’s all mild slapstick stuff, doors that won’t open, mantle shelves that keep falling down and other mild buffoonery that let you know well and truly what is in store for you as the audience once proceedings begin.

This is The Play That Goes Wrong, which has been running at the Duchess Theatre since last September, some eight months on and it now seems to be ensconced as a long-running comedy sensation.

Having started as a one-act play devised by members of the Mischief Theatre Company, the play has now evolved into a two act full evenings entertainment.

The Play That Goes Wrong features a multi-talented cast of eight, that give this play their all to deliver energy necessary to have the audience roaring with laughter.

Right from the curtain speech by the show’s director played by Leonard Cook, it’s obvious that the chances of this being any ordinary amdram murder mystery is unlikely. We are reminded of casting mishaps that led to their production of the musical Cat and the colour blind designer that de-railed their production of Joseph and his Amazing Technicolour Dreamcoat amongst others.

It’s all downhill from there. The drama begins and quickly it all goes to pot. Lines are forgotten, the acting is terrible, and the efforts of all of the actors on stage are at odds with each other resulting in a calamitous mess. But it’s hilarious.

The cast consisting of Rob Falcolner, Greg Tannahill, Henry Lewis, Jonathan Sayer, Charlie Russell, Nancy Wallinger, Leonard Cook and Adam Byron work together as an incredibly tight ensemble. This is fast furious comedy and the timing needed to make physical comedy work would put many a professional comedian to shame.

Like The Mousterap, the details of whodunit are sacrosanct, luckily I couldn’t tell you who did it to be able to spill the beans I was too pre-occupied laughing at the side-splitting conclusion to this hilarious night in the theatre.

Cast aside, special mention must go to the designer Nigel Hook. Hook’s scenic creation must be considered a member of the cast in the truest sense. It creates a playground for the members of this hapless production and its workings drive so much of this show, all whilst the audience collapses in fits of laughter as things go from bad to worse. Watch carefully, there are a million tricks built into this set that will have you baffled.

The Play That Goes Wrong suffers a little bit from dragging the joke out in some sections, but a killer second act had the full house at our performance howling for more.

It’s great to go and see a show that has been running for a while with a paying audience instead of the normal press night crowds we normally see shows with. The Play That Goes Wrong seems fresh, lively and the audience enjoying it as much as if it opened last week. The show has just announced that it is extending into 2016 so there’s no excuse to miss this great comedy. Some of us will be making several visits.

BOOK TICKETS TO THE PLAY THAT GOES WRONG