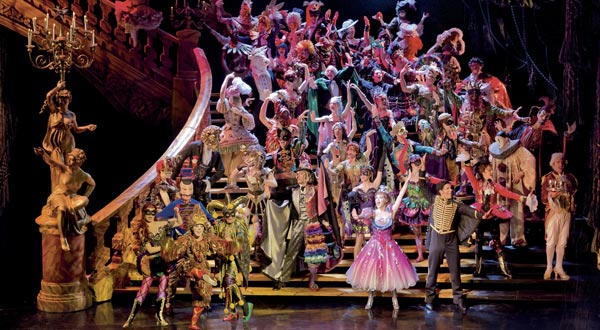 For a show that opened over 28 years ago, The Phantom Of The Opera continues to play to packed houses and, in every way, is an example, perhaps a high water mark, of magical theatre of the ornate, musical kind. Harold Prince’s direction is as effective, sharp and detailed as ever; Maria Björnson’s extraordinary design brings rich opulence and a profoundly romantic sensibility to every aspect of the narrative; Gillian Lynne’s musical staging, ballet sequences, and the overwhelmingly ebullient Masquerade, which kicks off Act Two, are masterful achievements.

But at the very heart of the success and longevity of The Phantom of The Opera, which has played continuously at Her Majesty’s Theatre since 9 October 1986, are Charles Hart’s clever lyrics (together with those penned by Richard Stilgoe) and Andrew Lloyd Webber’s luxurious and tuneful score. Despite their familiarity, numbers such as Music of the Night, Prima Donna, All I Ask Of You, Masquerade, The Point Of No Return and the title song still retain their power and theatrical beauty. This is no doubt due to the good work of current musical director James McKeon who masterfully controls the 27 piece orchestra, ensuring a level of skilled orchestral accompaniment most West End musicals can only dream about.

Of course, it is easy to think that everyone knows the show, has seen its secrets. But, as the matinee audience around me amply demonstrated, there are still many people who have never seen The Phantom Of The Opera live. So seeing the original production presented by the current cast affords newcomers a chance to experience the marvels of the Prince/Lynne production and returning audiences a chance to see if the piece holds up to the test of time.

Although there are a few moments when the old girl creaks slightly, for the most part the staging feels contemporary and interest is snapped to attention right from the very start, when the slightly menacing words of the auctioneer herald the commencement of proceedings. The sequences in the Phantom’s lair, complete with boat, candles and ornate organ are almost hypnotic; tendrils of smoke wrap around the imagination, infusing the action and music with intrigue. The tension in Point Of No Return is convincingly real and the final decisions of both Christine and the Phantom seem as surprising as ever.

Resident director Sam Hiller and resident choreographer Lynn Jezzard ensure everything is as tight and tautly strung as it needs to be to ensure that tight-rope between serious romance and high farce which this show walks fearlessly. They are assisted by a, mostly, very able cast.

Harriet Jones is beautiful, petite and alluring, exactly as Christine Daaé should be. She is completely at home with the Opéra Popularie Ballet corps and easily conveys the sense of a young, gifted artist confused and surprised by the attention lavished on her. Her voice is a delight in every way, and very even from top to bottom, with warmth and colour all along the way. Her most expressive vocal work is glorious and she never sings out of tune or without truth and real feeling. Wishing You Were Somehow Here Again is pure delight.

She is especially impressive in the second Act, both in the scene where Carlotta and the Managers are haranguing her about Don Juan Triumphant (an easy scene to make melodramatic and silly, which she doesn’t) and in the sensual but deadly duet, Point Of No Return. Harriet is in first-rate form.

Her Christine is all the more impressive given that, at the performance I saw, both her leading men were played by men who usually play other roles in the show. But the fact that Harriet was working with actors she does not routinely perform with did not impact on the quality of her central turn.

Kieran Brown, standing in for Gerónimo Rauch as the Phantom, was in splendid form and matched the intensity and detail of Harriet’s performance skilfully. There are many ways to make the role of the Phantom work and Brown has found his own: a vigorous physical performance, agile like a cat, but laced with rage, grief born from rejection, and ruthless determination. This is a scary Phantom, winningly so.

Vocally, Brown’s fine, high-baritone is silky, seductive, and powerful. He has excellent control at both the top and bottom of his range, enabling real richness in the lowest notes and a thrilling, edgy sound at the highest points. His attack, energy and mellifluous tone made Music Of The Night a real treat and his work with Harriet in his big numbers with her, the title song and Point Of No Return, was superb. While highlighting the flawed and murderous aspects of the capricious Maestro, Brown also clearly showed his tender underside. It’s a memorable and touching performance in every respect.

Raoul is a very difficult role to pull off successfully. Rich, handsome, assured to the point of arrogance, but desperately in love with Christine, his part in the piece is a near-impossible balancing act: somewhere between dashing twat and odd hero. The key to a successful Raoul is charm; so much charm that the gaps and flaws in the character can be covered over.

Oliver Saville, covering Raoul given the absence of Liam Tamne, has more youthful enthusiasm than charm but he attacks the role with a ferocity one might expect in lion tamers. He brings agitation and angst where there should be calm and authority. Still, he looks good and his voice is true and strong, and he is at his best in the scenes which don’t turn on his status as romantic alternative to Christine’s mysterious teacher: his scenes with Madame Giry, the fireman and the Managers are all nicely judged. With the relaxation that constant playing can permit, Savile will no doubt grow into the role.

The Giry women are well represented. Jacinta Mulcahy is a marvellously mysterious and firm Madame, French in every important way and coiled tightly, like a snake waiting to be charmed. When she is onstage, it is difficult to look at anyone else, so brightly does her intensity burn. Alicia Beck is a gorgeous Meg, poised and perfect in the ballet sequences, with a delightful singing voice and a terrific presence as an actress.

Lara Martins makes an exceptional Carlotta: a captivating voice of real power, bright and brilliant no matter what the note, agile, and sturdily supported. Martin’s’ control as a singer is exceptional with the result that her status as Supreme Diva is unquestioned – and very entertaining. Her characterisation is perfect: she is a ball-breaking power ball of rapacious delight, puffed with self-importance. Delicious in every respect.

Matching Martins in terms of style, tip-top voice, and gargantuan (and very funny) ego, John Ellis’ Piangi is a bliss bomb of eccentricity and Top C’s. In the wrong hands, Piangi can be insufferably tiresome, a problem for the momentum of the show; but not here. Ellis is perfect as the pompous Italian tenor of limited skill and the complexity and detail he brings to the performance demonstrates his own skill.

There is excellent work from Philip Griffiths as Reyer/the Auctioneer (perhaps unsurprisingly given Griffiths has been in the company for 24 years), and from Joseph Claus, Fiona Finsbury and David Francis as the Il Muto trio. Indeed, the ensemble is terrific in every respect, especially vocally.

One of the almost indestructible pleasures of The Phantom Of The Opera is the comic duo of the Managers, Firmin and André. These are roles of undiluted joy and when they work properly, the show works significantly better. Alas, it was not so here. At first blush, the thought came that the balance was wrong, the comedic rhythm irregular, because the usual Firmin, Andy Hockley, was off and the regular André, Martin Ball, was not used to working with his cover, Tim Morgan. But given that it was Morgan who gave the more assured, generous performance, and Morgan who was actively trying to be part of a duo, first blush was in error. Sadly.

Nevertheless, and somewhat curiously, the two key Managers’ scenes worked extremely well: the presence of others apart from Firmin brought the best out of Ball. The Prima Donna septet was a true highpoint, just as it should be.

With three lead roles being played by people who don’t normally play them, there was a real potential for this production to be on shaky ground. But the strength of the current company, the durability of the essentials of the production, the power of the score and lyrics, and the skill of both Brown and Morgan ensured that, small issues aside, the performance was triumphant.

No more talk of darkness: Her Majesty’s Theatre, Haymarket is burning brightly.

BOOK TICKETS FOR THE PHANTOM OF THE OPERA