Stephen Merchant has conquered nearly everything in his career – stand-up comedy, TV sitcoms and major Hollywood blockbusters. However, he has not yet brought his considerable talents to the stage, an anomaly rectified by a new production at the Wyndham Theatre.

The Mentalists, from the acclaimed writer of Two One Man, Two Guvnors Richard Bean, is a surreal yet darkly comic story of two men holed up in a cramped Finsbury Park hotel. Ted, an angry and resentful middle management type (Merchant) enlists the help of calm, fantasist hairdresser Morrie (Steffan Rhodri) to film a video, which he is convinced will teach the world the secret of happiness.

No it’s not a sex tape (much to the relief of the audience) – it’s a recruitment video for Ted’s new utopia. In Ted’s promised land good behaviour and sexual morality will be rewarded and he will be the chief of his own Eurosceptic Daily Mail reading empire. After a funny, if slightly meandering first half, the play soon takes a darker turn, as the true nature of Ted’s plan comes to light. 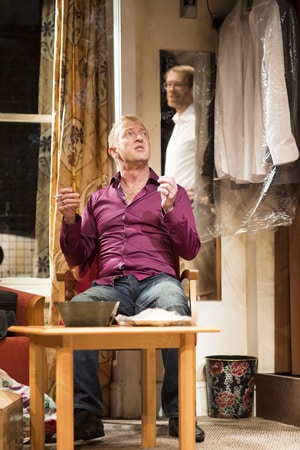 The humour comes think and fast in this revival, with sharp jokes and one-liners throughout. Not only did the script not feel dated (it was written in 2002), it was actually spookily topical; Ted’s rant about Greece was well received and must have had the shows’ producers thanking the theatre gods for recent events. There were also some strong physical and sight gags, notably when Ted’s presidential style piece to camera was ruined by a wardrobe malfunction.

The Mentalists is something of an enigma – perhaps not quite funny enough to be a sidesplitting comedy but lacking the emotional heft to really fly as a drama. The colossal twists of the second half are played for laughs rather than for heart, giving the whole piece a veneer of farce and absurdity. This is reinforced by the fact that a major bombshell dropped by Ted seems thoroughly out of keeping with the petty and miserable character presented earlier on who ‘couldn’t change a lightbulb’. After a tension-building climax, the ending also lacks a bit of conviction, going out with a whimper rather than a bang.

In his West End stage debut, Stephen Merchant easily dispelled any accusations of stunt casting with a strong performance as Ted. His gangly frame and gift for physical humour was a real asset to the production, and his comic timing was just as sharp as one might expect. Having said that, his moments of anger were at times often shouty rather than scary and his performance wasn’t quite as layered as his on-stage partner.

Steffan Rhodri was wonderful as metrosexual and wannabe lothario Rhodri. He made the most out of the character’s weird and unlikely tales – ‘My dad is the only boxer to have boxed at every weight’ being a particular high point. He perfectly captured the essence of a kindly soul from a troubled background who just wanted to impress people.

Richard Kent’s hotel room set gives the play the bleak and depressing backdrop that it really needs. The truly drab looking set is functional (with an added bathroom!) and gave me horrible flashbacks of dreadful rooms I’ve stayed in over the years. The TV on the set was used to good effect, with some strong audio-visual work from Duncan McLean; Abbey Wright’s direction is conventional but solid.

The Mentalists is a fun and lively Pinteresque farce from a very talented playwright. Whilst there are a few thematic flaws, an amusing script guarantees an interesting afternoon, brought to life by two actors who are at the top of their game.

BOOK TICKETS FOR THE MENTALISTS AT THE WYNDHAM’S THEATRE