I’ll cut to the chase. The Legend of Moby Dick Whittington is approximately fifty minutes of utter, inventive, hilarious joy! I say approximately fifty minutes because the team have a created a wonderfully interactive home panto, in which viewers are encouraged to use items found around the house to create a ship, (sorry parents), a shipwreck, boo and shout and generally join in the fun. In my case, I had to pause it a couple of times because I was laughing so hard! 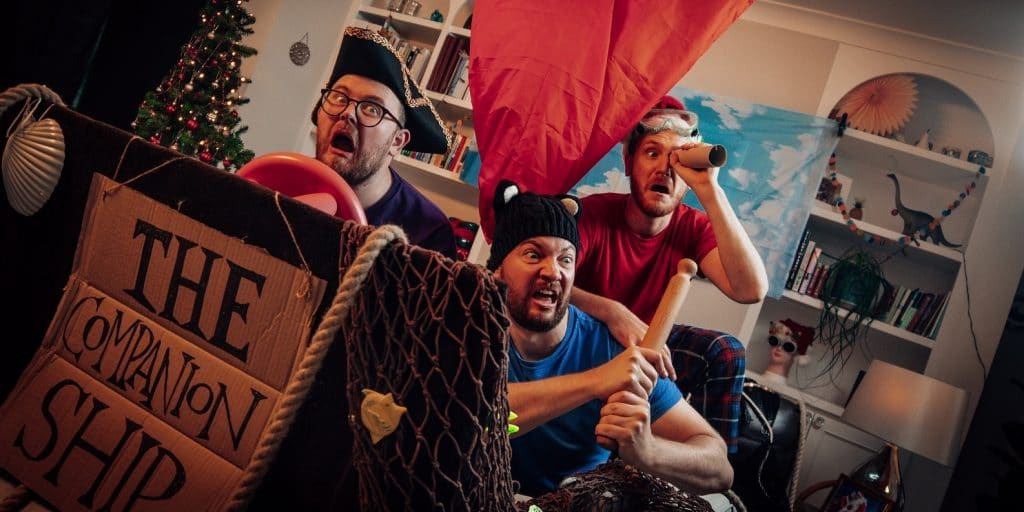 Written by Ben Hales and the performers James Dunnell-Smith, John Woodburn and Joshua George Smith, the sparkling script mixes well-known panto story Dick Whittington with the tale of Moby Dick, throws in Pinocchio and King Rat, and takes us on a joyous journey across the seas and even inside the whale-without ever leaving their house! There’s plenty of fun and games for the whole family, and some of the stunt doubling is hilarious. I was enjoying it immensely, but the first sight of Moby Dick is pure, distilled, joy! The sequence where they speak whale, and we are taught it, is inspired lunacy, this is where I did have to pause the streaming and roar with laughter. I even joined in with the booing and dancing- sorry neighbours, yes, I do know how old I am.  No, I can’t guarantee it won’t happen again. The three performers are loveable, hugely talented, and are clearly having enormous fun. There’s a wonderful running gag about bells and one about Dick answering to Moby Dick that has a wonderful payoff.

Director Kerry Frampton keeps the action flowing, and the crew are to be congratulated on editing and creating a smooth production, with excellent sound and effective, yet minimal, visuals. Keep watching the credits for even more gags. I’m not exaggerating when I say this modest production may well save your Christmas! Don’t miss it!