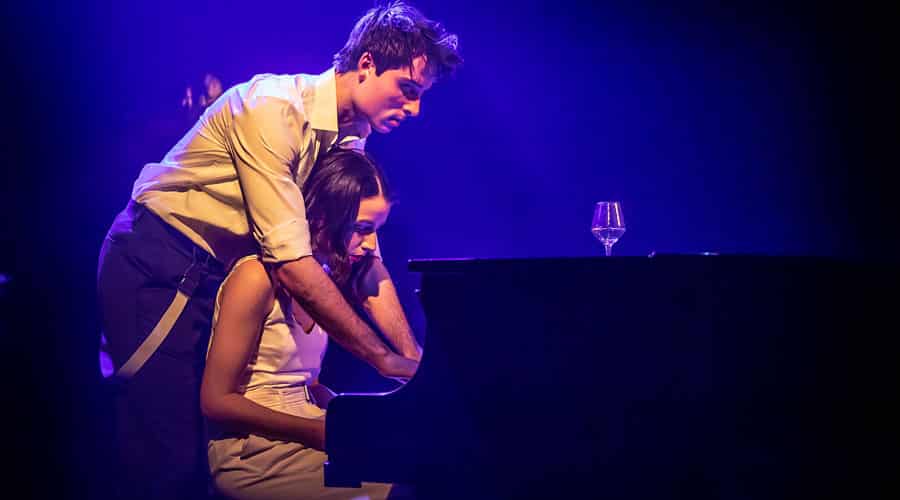 The actor Tom Bosely once said that the thing he loved most about a musical revival is the audience goes in whistling the tunes. When Molly Lynch, as the character Cathy, sings “I really think you’re going to like this show, I’m pretty sure it doesn’t suck“ (roughly thirty-two or so bars into ‘See I’m Smiling’ the third song of this well-trodden narrative song cycle) it becomes difficult to even class this production as a revival. Sitting atop a baby grand piano in Lee Newby’s sparse but intuitive set design (at the top of the show it feels like an Analyst’s office); framed (at least at seat D17) by Rachel Shakespeare on cello, Elaine Ambridge on violin; and (importantly) accompanied by Oli Higginson playing her wayward husband Jamie; the theatregoer can be forgiven in thinking they are witnessing a scene from a piece that was written not within even the last five years, but maybe even five minutes ago. Jonathan O’Boyle’ s production of Jason Robert Brown’s quasi-autobiographical musical about the simultaneous blossoming and breakdown of a relationship, has an abundance of beauteous relevance. This not only bathes this show in a new musical light, but resuscitates its heart and soul, and fixes many of the issues that have plagued the musical since it opened two decades ago. 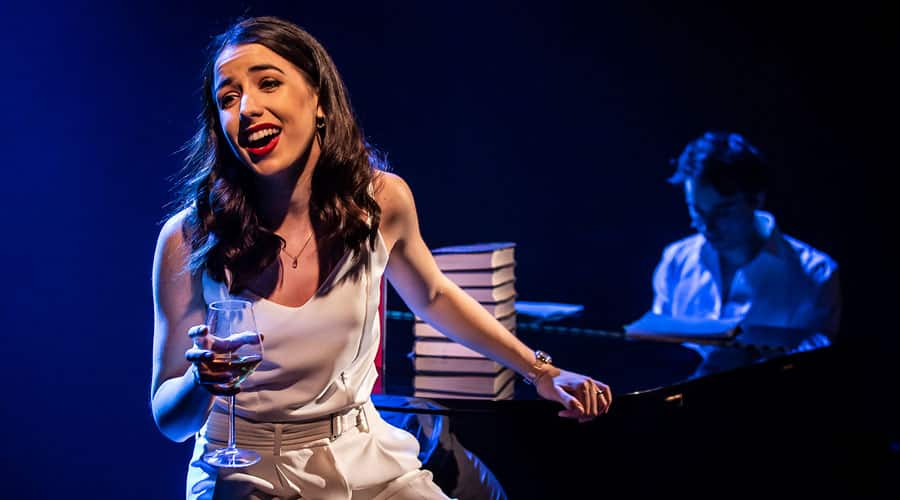 Jamie has met Cathy, and we witness his eventual falling in love, marrying, and ultimately leaving her. Cathy has discovered Jamie has left her (a beautifully poignant ‘Still Hurting’) and in retrospective musical analysis, we explore how and why, finally reaching that perfect moment at the end of the first date and at the start of where it all began. The Last Five Years plays with time and space in that we see both sides of a breakup; one told from start to beginning, and one told from beginning to end. Perhaps the shows most devastating song, the finale ‘Goodbye Until Tomorrow/I Could Never Rescue You’, is the summation of the collective journey the audience ventures upon with this couple. Newby’s set is now littered with the detritus of this failed romance, as the final note shepherds a tear-stained audience on its way after ninety minutes of song. 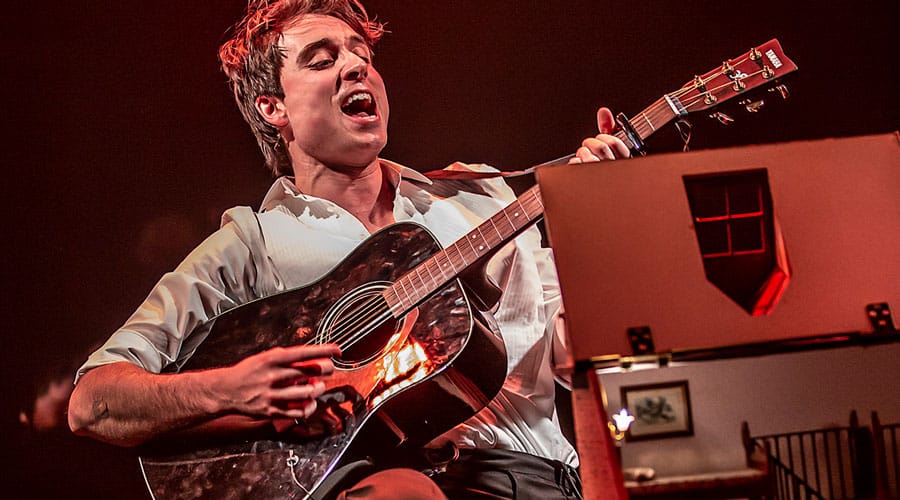 It sounds a lot more confusing than it actually is, as this triumphant production makes some dramaturgically dodgy chronology delightfully easy to navigate and understand. The show is concise, driven and coherent; not a sound bite a producer would rush to plaster over the marquee; but so important in the context of this musical. It feels as though O’Boyle, Lynch and Higginson have sat with Musical Director George Dyer and have torn the musical apart, line-by-line, phrase-by-phrase, remoulding it with a 2020 purpose. Skype and FaceTime and frappuccinos are incorporated without feeling gimmicky, and for the first time (at least in this reviewer’s twenty-odd year relationship with the piece) the musical doesn’t feel like Jason Robert Brown’s attempt to render all sympathy at the ebullient Jamie’s door and paint Cathy as the nagging, under-achieving and posturing drag. This is a testament to the impressive theatre craft on display. Such is the success of this re-rendering, it is nigh on impossible to see the seams between staging, music and performance; so what is delivered is a rich tapestry of actor-musicianship that even goes some way in challenging the norms of that, already nuanced and alternate way of story-telling through song. Jason Robert Brown’s gorgeous score has never sung with such clarity or been heard so well. Brava, indeed! 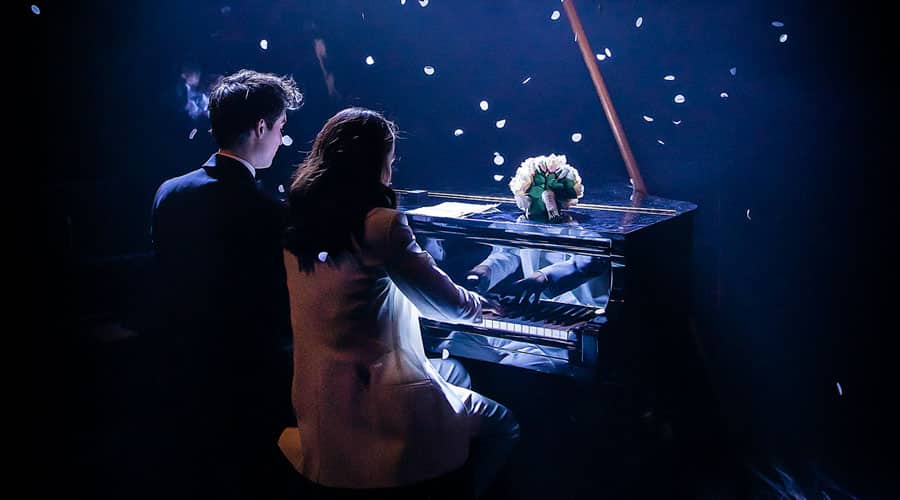 It is important to note that as actor-musicians, Lynch and Higginson carry the story and at points the melody over the top of Dyer’s almost virtuoso performance on keys in the pit. Each have created characters who are flawed, honest and exceptionally relatable; whilst playing the tender, pulsating heart of the score with ease and flair. The togetherness of their performance in the one true moment where Cathy and Jamie find themselves in the same time and space (a fleeting succession of phrases in the song ‘The Next Minutes’) sends genuine shivers down the spine. Whilst arguably Higginson receives the best of Sam Spencer Lane’s choreography, Lynch takes home the jazz hand award for the hilarious ‘Summer in Ohio’.

Whilst, admittedly, it’s a little early to crown The Last Five Years as Best Musical Revival, or even (under O’Boyle’s meticulously truthful imagining) Best New Musical of 2020, there will have to be a pretty special piece of theatre to topple it off its well-earned pedestal. In response to the character Cathy’s statement in ‘See I’m Smiling’, this reviewer didn’t like the show… he loved it, and thought it certainly didn’t suck!

Otherwise, please click here to continue to the Southwark Playhouse...
x
Send this to a friend