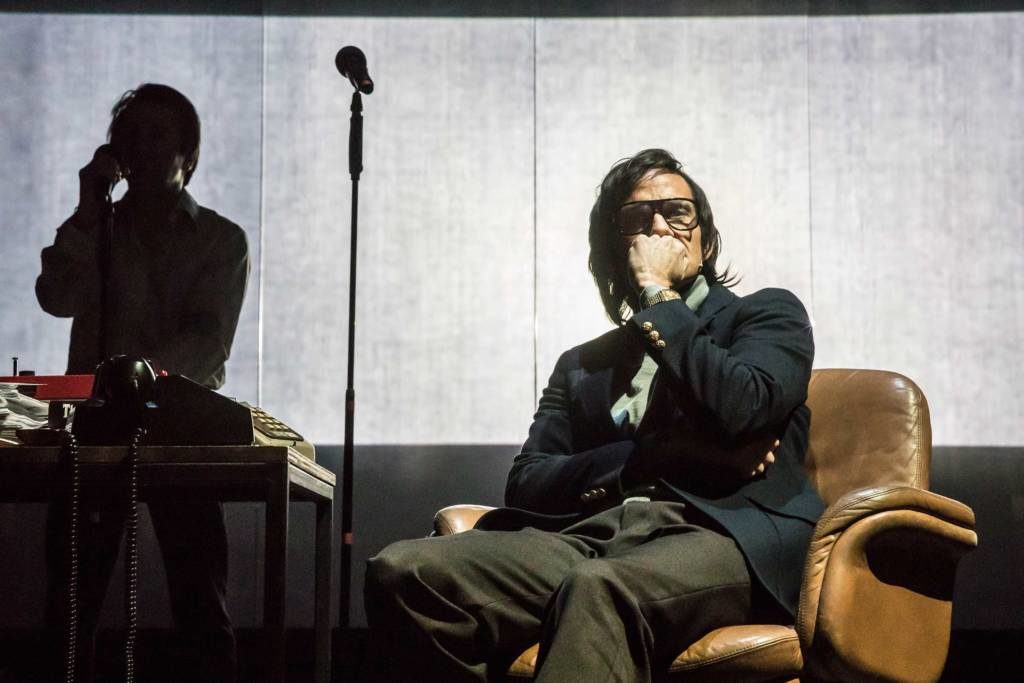 The story is the star, according to legendary Hollywood producer Robert Evans, and in his best-selling 1994 memoir The Kid Stays in the Picture, he proved he had a lot of stories to tell about his life and career. These have been distilled by director Simon McBurney, co-director of theatre company Complicité, into a riveting piece of theatre that celebrates the art and business of film-making.

The star is Danny Huston, a Hollywood actor who also happens to be the son of John Huston, the director and actor who appeared in Evans’s film, Chinatown. He spends most of the play as just a silhouette behind a screen, playing a modern-day version of Evans, narrating with a deep, gravelly voice and likeable charm. However, Evans’s words are also taken up by the other seven cast members throughout, particularly by another American movie actor Christian Camargo, who steps forward to play Evans in the 1960s and 1970s. This fragmentation of the role suggests the multiplicity of views beyond one man’s memoir, reminiscent of the book’s assertion that: “There are three sides to every story: your side, my side, and the truth.”

These other cast members – Thomas Arnold, Heather Burns, Max Casella, Clint Dyer, Ajay Naidu and Madeleine Potter – deftly bring to life many figures from Evans’s past, from his parents in 1930s New York and statesman Henry Kissinger to his third wife Ali McGraw, directors Francis Ford Coppola and Roman Polanski, Godfather creator Mario Puzo, and other stars including Norma Shearer, Mia Farrow, Marlon Brando and Richard Gere. We see only brief snippets of a few films but discover the deals and dramas behind hits produced by Evans and by Paramount Pictures when he was at the helm such as Love Story, Rosemary’s Baby and The Godfather.

Through the use of video and news footage, the story is firmly placed in the context of its time, from the assassination of John F Kennedy, Vietnam and Watergate to the struggle for race equality and the arrival of Hollywood actor Ronald Reagan in the White House. One of the most moving scenes is when news breaks of the 1969 murder of Polanski’s pregnant wife Sharon Tate and their friends by the Manson Family at a dinner party that Evans had been due to attend.

The show also charts his declining career in the 1980s including the flop The Cotton Club plus his conviction for cocaine trafficking. It also touches on the contract killing of a potential backer of The Cotton Club by one of the film’s other producers, Lanie Greenbergen.

While the first part of the play opens on a high point of Evans’s career, the 1972 premiere of The Godfather, it has a more sombre tone in the second half, told from the perspective of Evans in hospital in the 1990s after a series of strokes. With his career in the doldrums, a speech from Malcolm X captures the tone with his famous line: “I don’t see any American dream, I see an American nightmare.” As Evans himself describes this low point of his life, “Once king of the mountain, now I was not even allowed to climb it.” Drawing on his 2013 follow-up memoir The Fat Lady Sang, Evans (who is now aged 86 and was involved in creating this production) is seen to claw his way back to find a reason for him to “stay in the picture” – a reference to producer Darryl F Zanuck defying Ernest Hemingway and Ava Gardner to keep the young Evans in the 1957 film of The Sun Also Rises during his early career as an actor.

Often funny and sometimes deeply moving, The Kid Stays in the Picture dazzles with sound and vision thanks to video designer Simon Wainwright, lighting designer Paul Anderson and sound designer Pete Malkin. Otherwise, there is a sparse set of cleverly used microphones, video equipment and back screen, designed by Anna Fleischle. While the play will particularly delight film buffs like myself, it is a stunning and inventive piece of theatre that tells the story of Evans’s life with as much drama and excitement as the films he produced.

BOOK TICKETS TO THE KID STAYS IN THE PICTURE