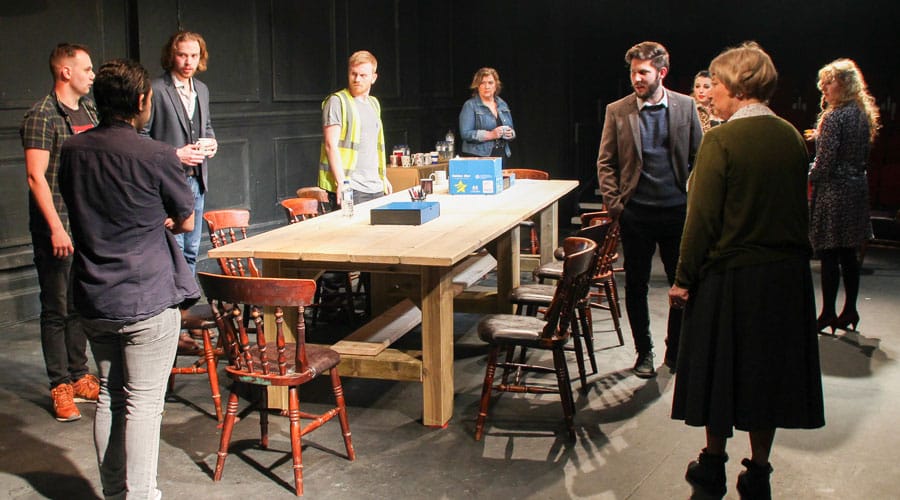 One of the most productive and fascinating of new musical theatre composers in this country is Ashley Walsh.  In a very short career to date, he has amassed a dozen productions of his shows and is opening no fewer than five new titles in London alone this year.  He is clearly one of the hottest guys to watch.  Working with a broad and well-developed group of collaborators, here he is writing music and lyrics with co-lyricist and book author, Amy Fletcher, with additional lyrics by T Michael West.  Two years ago, in Runcorn, they launched the first version of this behind-the-scenes look at a jury in the deliberation room of an apparently open-and-shut murder case.  Now, very considerably re-written they have brought it into London in a presentation directed by upcoming talent Joseph Meighan, and produced by young, dynamic producers, Jess Ramsey and Anton Benson.  Kate and John Plews are thrilled to have them programmed for a two-week run in their theatre that has been the discoverer of so much outstanding new creativity.  If you want to experience an important step on the journey of this remarkable composer and the great artists gathered around him, then this is not an event you should miss. 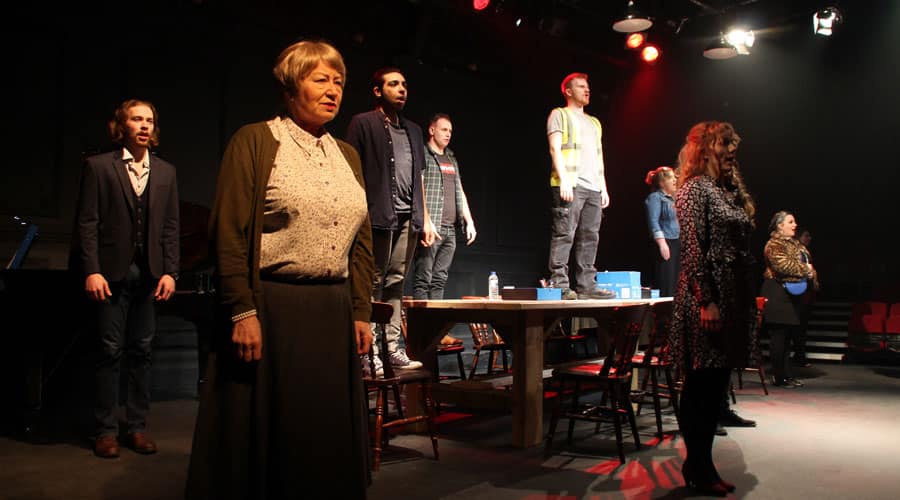 The opening brings out vivid colours and rhythms from Walsh’s restless musical imagination, and these lend surprising energy to the static dramatic situation.  However, although the exposition is clear – with that number of repetitions it could hardly be anything else, there is a sense that the opening still doesn’t quite get to articulate what the show is really ‘about’.  It seems to be missing something that will draw the audience into the heart of where it is.  That all changes when Kaidyn Hinds, as juror Harry, breaks out of the established norms of their conversations and vigorously pulls the whole show into powerful focus with his game-changing musical number.  From then on, we are in for an exhilarating ride.  And, after the interval, the totally re-worked second half brings us into an altogether different and more accomplished league.  With perfectly executed transitions, this becomes the kind of musical where you want to lean forward and listen, intently; there were no applause ‘buttons’ on the performance I attended.  The action merges seamlessly into music, and then back out of it again, with awesome control and mastery of the form.  Harold Prince said ‘musical theatre is all about the transitions’ and here he would have been delighted to see such artistry and skill. 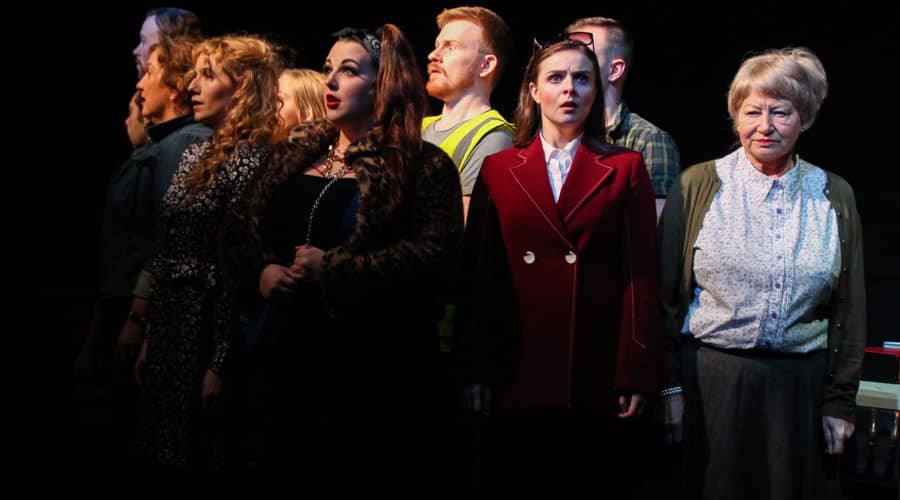 A jury is chosen at random from subjects of the crown, which gives the writers the chance to examine society from at least a dozen different angles.  And, since the story is set firmly in today’s world, that is what we get: the murder charge throws up first procedural and then more profound challenges to their understanding and imaginations, and the unexpected hot-house vicissitudes of their frustrating search for agreement cause each to open up and reveal to the others – or themselves – something important.  The book gets better at doing this as it goes along, and it is possible there may be further re-writes of it ahead.  Certainly, the only way to learn a complex art like musical theatre is through the arduous and thrilling process of mounting actual productions and being prepared to draw lessons from them.  As far as I can see, Walsh is learning more lessons faster than anyone else I can think of. 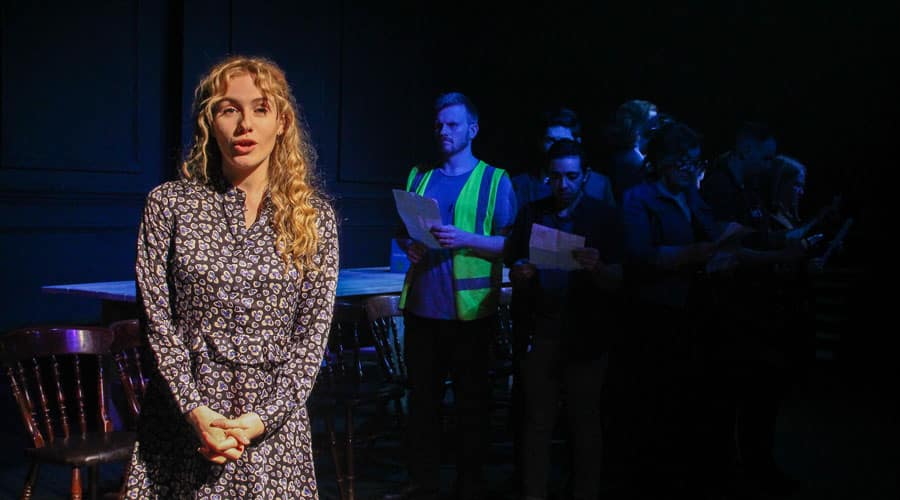 This theatre also prides itself on introducing a wider public to new performers, and this strong cast does not disappoint.  Mainly cast from more recent arrivals in the industry, among Walsh’s most sublime writing are songs given to Laura Meaton’s devout Christian, Hannah, and to Laura Coard’s capable chair, Sarah.  The haunting memory of their gorgeous singing will resonate in your mind long after you hear it.  There are also well-drawn character portraits for Tom Blackmore’s hi-viz wearing Andy, for Bethany Grace’s comically narcissistic Debbie, and for Charlie Culkin’s finely balanced Louise.  Muddier waters cloud the soundscapes of David Gibbons’ aggressively defensive Darren and Janice Fryett’s older and wiser Carol – she being one of the more senior characters: eldest of all, Elizabeth Brooks startles with her journey, suddenly rediscovering an enthusiasm for life as Alma.  In fact, all of them find the experience a transfiguring one, from Huon Mackley’s initially distant and coolly relaxed Simon, through to Katherine Victoria’s superficially uncomplicated and shallow Jodie, or Ashley Ball’s apparently kindly Tom.  All encounter something to upset their own personal apple-cart, and then have to see whether they can pick themselves up to move forward again.  And, as a whole, they make a magnificent choir, revelling in Walsh’s breath-taking harmonies, accompanied by the composer-arranger at a grand piano, supported with sound design by James Radcliff and lit with some canny effects – watch out for the occasional intrusion of the unseen/unheard court officials – by Ryan Woolard.

By focussing on getting his work produced, Walsh has had arguably more chances than anyone else in his generation to perfect the practical business of learning his craft.  The results of all this relentlessly hard work are showing: in this piece we have perhaps a turning-point, where technical prowess and creative potential start fusing together to make really great musical theatre.  Lucky people will get to see this show.  Everyone else should watch out for announcements of his forthcoming show and book as soon as they can.

Until 16 February 2020 – Upstairs at the Gatehouse

BOOK TICKETS FOR THE JURY