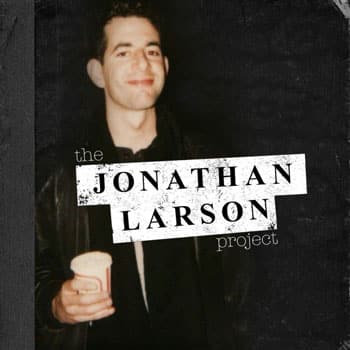 Most theatre fans know about Jonathan Larson through his phenomenally successful musical Rent, some will know of or will have seen his earlier show Tick, Tick, Boom! but there’s a lot about Jonathan that many won’t know.

That’s all about to change thanks to one Jennifer Ashley Tepper. A hard-core musical theatre lover who is now living her dream in New York. Author, historian, producer, dreamer, Jennifer admired and was inspired by Jonathan’s dedication to his art. After researching, unearthing and compiling material from Jonathan’s archives pre-Rent she compiled and created this amazing showcase which was presented in 2018 at Feinstein’s/54 Below.

I’ve found myself spending hours listening to this remarkable recording. It’s almost revelatory in the way it showcases Jonathan’s development, his influences and the power and intensity of his compositions.

The Jonathan Larson project has the feel of a theatrical song cycle like Songs For A New World or Starting Here, Starting Now but taken as a whole or just as individual stand-alone songs this is a gem of a recording that many will savour, whilst wondering if Tepper found enough songs for a sequel in her hunt through Jonathan’s musical trunk.

Firstly, the assembled cast for the live show that have been captured here are exceptional.  Nick Blakmire, Lauren Marcus, Andy Mientus, Krysta Rodriguez and George Salazar interpret Larson’s material with the voices of the Rent generation.

Charlie Rosen has supplied some stunning arrangements for this collection of material. There is some incredible musicianship to be had here with Rosen (Bass), Marques Wallis (Drums), Megan Talay and Cody Owen Stine (Guitar) and especially with Natalie Tenenbaum who has provided some of the finest piano playing I’ve heard in recent times.

As for the tracks each is a moment in itself, each is imbued with a certain theatricality but there’s also a feeling of great honesty and heart here. My highlights change day to day as I listen and my mood changes. Iron Mike, a stirring re-telling of the Exxon Valdez oil spill tragedy is notable not only for its catchy melody but its exception lyrics make it a firm favourite as are One Of These Days, White Male World, Find The Key (cut from Tick, Tick, Boom!), Pura Vida, and SOS.

I found Piano – Larson’s love song to his piano and one of the final tracks on the cd poignant with its lyrics “I may not play like a concert man, but I’ve go a song to sing”.  What you realise is that before Larson became an overnight star, he was one of the most prolific of writers, each piece of work honing his craft, exploring theatrical ideas, trying to make musical theatre relevant to a new generation all the while paying homage to the writers and stylistic forms he loved.

Don’t forget that much of the material presented here had never been heard before. Twenty plus years after his death, Jonathan has a new show. Its one that I’m sure will be performed all over the world with this recording as its single most valuable calling card.

There’s much to recommend this recording, but what strikes me most is that you can hear the heartbeat of this amazing writer in the melodies and at moments throughout the cd.

There aren’t many musical theatre writers who can do music and lyrics. but it is apparent that Jonathan Larson was one of them. There’s a lot to absorb and enjoy here. Thanks to Ghostlight for publishing a fabulous CD booklet that not only contains all the lyrics to the songs but some great reading for any fan of musical theatre.

ORDER OR DOWNLOAD THE JONATHAN LARSON PROJECT FROM GHOSTLIGHT RECORDS