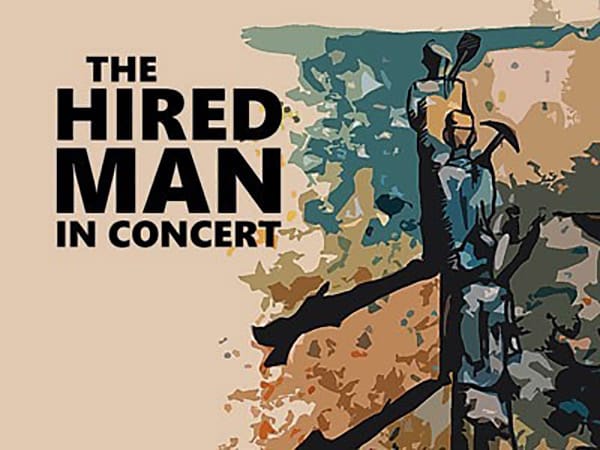 For years now, Edward Seckerson – and many others – have been telling the world that Howard Goodall is a great writer of musicals, and that his first work, ‘The Hired Man’, is his greatest work (to date). Since its first appearance in 1984 with a respectable run at the now vanished Astoria Theatre on Charing Cross Road, the show keeps on turning up around the UK, and travels the world. Goodall himself has become a well-known face to television, and developed a career in choral music, as well as continuing to write exciting, unusual, interesting, thoughtful music theatre, most recently the exhilarating ‘Bend It Like Beckham‘. Meanwhile, the Seckersons of this world keep on reminding us of the greatness of his debut work.

Well, last Thursday, ‘By arrangement with the Really Useful Group Ltd.’ (whose Andrew Lloyd Webber put his weight behind the show’s original West End run), Cadogan Hall brought a lavish concert performance of the piece to its stage, and – once again – we saw and heard just why we should value this work amongst the highest achievements in the musical theatre. It is simply breath-taking. Indeed, freed of decor and costume, lighting and choreography, and of all the pageantry of the theatre, when exposed to the forensic inspection of the concert platform its virtues come across even more strongly.

And what virtues! Melvyn Bragg wrote the novel upon which Goodall based this work, and was then persuaded by the 24-year-old composer-lyricist to become the author of the musical’s book. At this performance, what a treat it was to find that he was on the stage to read the narration, with his customary geniality and clarity. Meanwhile, on the podium was the youthful Andrew Linnie, who has fairly exploded onto the musical theatre scene, with a string of high-powered credits: here, he drove the band and singers along at a cracking pace, infusing Goodall’s transparent textures with a bracing energy, even in the most delicate moments. Goodall’s original scoring was preserved here, with piano, harpsichord, harp, trumpet, but with a beefed up string section.

His mastery of musical structure displayed itself in every number, as groupings of voices and instruments were beautifully modulated to present the epic drama of the Tallentire family in turn-of-the-last-century Cumbria. Nine wonderful principles, and a handsome ensemble of twenty-three took the vocal parts. The cast was led by John Owen-Jones in the title role, displaying all the majestic power of the great musical theatre leads he has played throughout his career; alongside him, Jenna Russell as his wife, Emily, brought astonishing realism and complexity to each moment; Sean Kearns was Tallentire’s steely but fair employer, and Nigel Richards the lead’s ebullient brother. Stunning enough for you? It gets better. The other Tallentires were Stewart Clarke, Evelyn Hoskins and James Moore, with Jessica-Louise Parkinson as Emily’s friend, Sally. The cast were directed with neat poignancy by Samuel Hopkins, speaking accents schooled by Conor Neaves. And Barret Hodgson’s projections and Sarah Readman’s lighting completed the magic.

A line-up like that is a dream cast, and they made a terrific sound. Inspired by this, the senior ensemble of some great high-quality talent (which, for example, included the magnificent voice of Stephen Barry, recently heard as Adam/Noah in ‘Children of Eden’), combined with the younger voices of Laine Theatre Arts, made for truly magnificent singing all round, all brought out with admirable clarity and balance in Seeta Mistry’s sound design. Thus was the whole experience lifted from the everyday world of the theatre and propelled, perhaps assisted by the former ecclesiastical setting, into the heady heights of oratorio.

The analogy is instructive. The compression of the family narrative in the novel, to be rendered in three hours on the stage, means that chronology often has to be accelerated. There is a 16-year lurch forward between the acts (reminiscent of ‘The Winter’s Tale’, another story where youthful passion, fraught with misunderstandings and misdeeds, mellows into the wisdom and acceptance bestowed by age), and mid-way in the second half the Great War hurtles past with barely a ricochet. None of this is ever problematic, because Goodall’s music keeps its own time and tells its own story, using, and re-using, and re-re-using motivic information and ideas, orchestral coloration, and vocal personalities, to unify in the harmonious architecture of the opus the disparate, sprawling elements of the story.

Goodall can cheerfully say the same thing, musically, five or six times in a row, giving a sense of familiarity and recognisability, but always enlivening his statements with subtle – or striking – variation, and constantly pushing forward the narrative progress of his tale: this results in us always feeling ‘at home’ with what he is saying, and always being able to absorb and comprehend each detail of the story. The delightful perfection of his lyrics completes the process, with words woven into his musical textures like notes themselves; he is utterly alive to the music of language, its timbres, its percussive and melodious effects, and in the hands of this master of the art, English becomes another instrument in his symphonic vision. Very few artists, I think, are able to work at this exceptionally high level. Wagner could do it. But how many other composers combine musical and literary skills of such sublime beauty?

So, far from over-stating the mark, maybe Edward Seckerson needs to bang that drum even louder than before. You can next see the show at the Maidenhead Operatic Society in November. Who can wait?