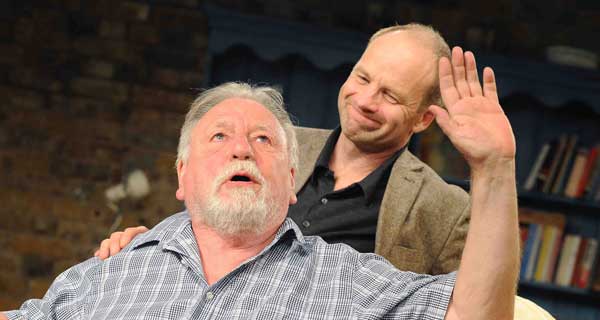 I always go to see new writing for the Theatre with a mixture of dread, excitement, anticipation and hope and more often than not only one of those emotions really gets a workout. Sometimes the situation is daft; sometimes the dialogue is clunky and totally unbelievable, devoid of poetry, imagination or art; sometimes the actors are not equal to the task the dramatist has set them; sometimes the director puts a stamp upon the work which results in gloss or tawdry sensationalism rather than the unleashing of illuminated understanding; sometimes the play is simply terrible. And sometimes, like now at The Bush Theatre, something truly miraculous occurs.

The Herd, the playwriting debut of Rory Kinnear, is an assured and quite masterful insight into the particular dynamics of a family where the youngest child, a boy now turning 21, was born with enormous physical and mental challenges, a boy who has required special and detailed care his whole life, a life which is now approaching its last sad moments. His family, bound with love for him but torn apart because of him and the way each has reacted to his birth and needs, is a dysfunctional group of angry, desolate and desperate souls, but they are by no means ciphers or caricatures.

Kinnear has etched each character – Mother, Sister, Gran, Grandpa, Sister’s Beau and alienated deserting Father – with care, brutal honesty and a truth that is difficult to ignore. It is as funny as it is devastating, and when it is devastating, it is truly so. Anna Calder-Marshall and Kenneth Cranham are precisely right in every respect as the grandparents; big characters but with pulses and small ingenious details which make them rich, delicious foundations for both comedy and tragedy. Each of them nails every line and produces a performance of stunning power and, ultimately, joy. It will be a long time before I forget Cranham’s exhortation to Adrian Rawlins’ shameful and difficult Father (his son-in-law to do whatever he can to be at his son’s side or Calder-Marshall’s extraordinary speech to the same man about why her daughter is driven by her unimpeachable love for her son.

Amanda Root is brittle, obsessed and thoroughly convincing as the shattered Mother and she has excellent support from Rawlins who plays the awkward returning Father with mesmerising intricacy, intimacy and intensity. Adrian Bower is excellent as the Beau (who does performance poetry when not being a carpenter) and his performance is the perfect combination of awkward geek and enthusiastic lover.

By far the hardest role is that of the Sister – the sibling whose life has been overshadowed by her ill younger brother, the sibling who had to grow up and be responsible, the sibling who lost her Father because of her brother and the sibling who has had to “be there”, always and uncomplaining, for Mother. Louise Brealey gives it a good shot, and there are moments of perfection in her performance, but overall she is slightly out of her depth; it’s a very demanding role and the company is highly skilled. Still, she by no means is bad; it is just that there is a better performance of that character waiting to be unveiled by a more assured actress.

Howard Davies directs the proceedings with consummate ease and the 110 minutes passes like the breezes on a perfect autumnal day. Helen Goddard’s set is great, although the placing of the front door oddly, and rather stupidly, denies the key action which occurs there to about half the in-the-sort-of-round audience. But these are minor quibbles.

This is a wonderful night at the theatre, exhilarating and rewarding, and a portentous debut for Kinnear. It is a play which could play anywhere – and should. It has insightful and glorious things to say about love, parenting and family – and it is fiendishly funny to boot. It’s a much better debut play than The Last of the Haussmans which debuted at the National last year although some of the subject matter is similar. It should be picked up by the National and, indeed, any theatre company that wants to do excellent contemporary theatre. Unmissable.