Paul T Davies reviews The Good Scout presented by Boys Of The Empire Productions at Space at Surgeons Hall as part of the Edinburgh Fringe, 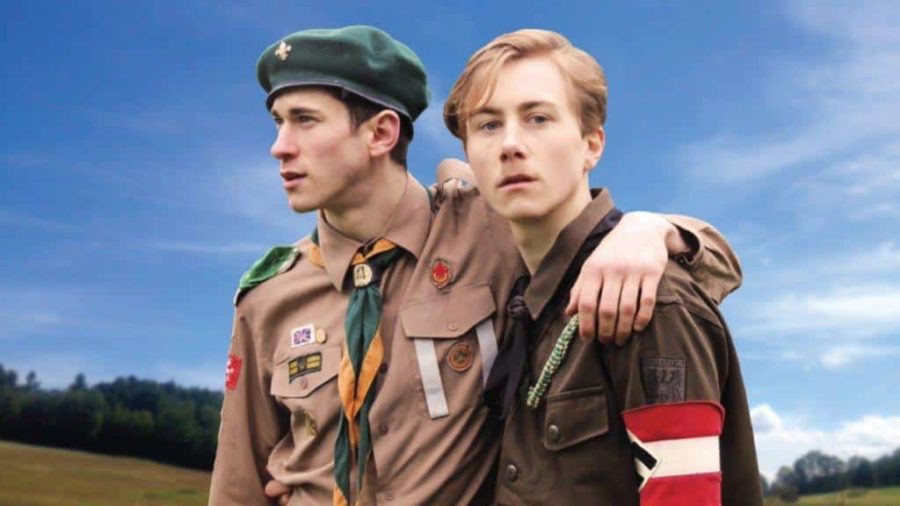 It’s a fascinating and relatively unknown slice of history, that the Boy Scout Association engaged in exchange visits with the Hitler Youth during the 1930s. These were dubbed ‘peace and friendship’ tours, the irony being that Hitler had banned the Boy Scout movement in Germany. Whereas a scout made an oath to serve God and Country, the Hitler Youth made a vow to die for his country and Fuhrer. Glenn Chandler’s new play, set in 1938, explores such a visit, adds gay desire, and is a play of mixed results,

A great deal of exposition needs to be given, and this felt a little forced. Historical information is presented in a series of music hall sketches, and these jarred with the naturalism of the rest of the play. The visit and the ensuing tensions between the boys is enough to reflect the period and the impending war. Gerhard is the dominant Nazi, bullying and manipulative, open to homosexual love yet prepared to send gays to a concentration camp, and this is a fine performance by Clemente Lohr. He stirs up feelings in Jacob, (Charlie Mackay), and it begins to feel that everyone in the youth movements are gay. Even the mysterious Government official, John Dory, seems to make passed at Will, (Clement Charles).

It’s an interesting story, but I found the play became over-complicated by plot, and some of the acting was a little forced. A shorter running time, focussing on the central group, with a strengthening of the homophobia expressed, would have created a stronger play. As it is, this is a strong docu-drama on an interesting subject and worth exploring.