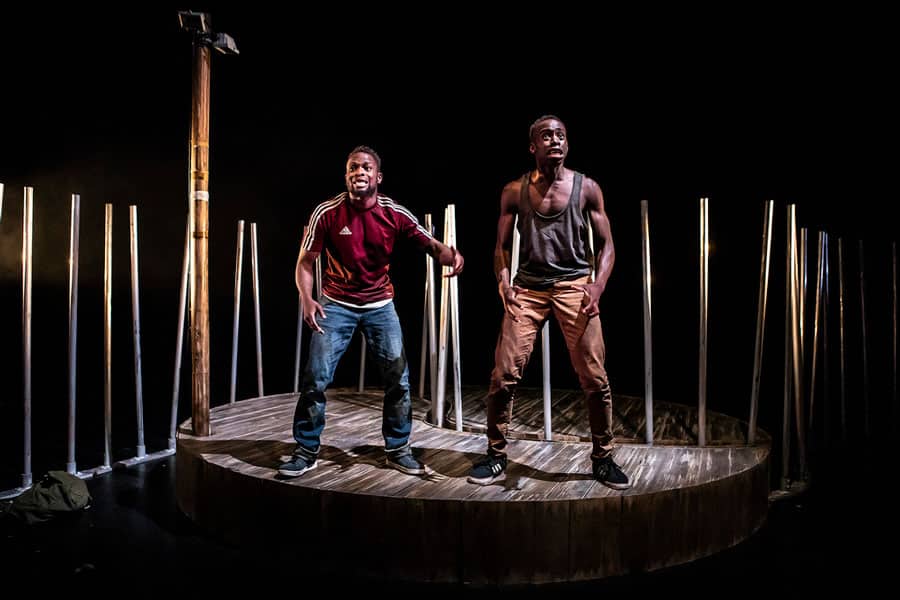 Chigozie Obioma’s 400-page novel The Fishermen – shortlisted for the 2015 Man Booker prize – has been ambitiously adapted into a succinct 70 minutes in a new touring production from Midlands theatre company New Perspectives. Playwright Gbolahan Obisesan has skilfully distilled the tragic story of four young brothers growing up in a small Nigerian village whose lives are ripped apart by their response to a terrifying prophecy from a local “madman”.

The book is an expansive narrative about family and village life, populated by a crowd of characters, so it is some achievement that it is told through just two actors playing brothers Ben and Obembe. Written from the perspective of the pair looking back years later, it requires them to play a wide range of multiple roles including the other two brothers, Ikenna and Boja. Both actors give phenomenal performances. Despite his age and height, Michael Ajao magically transforms himself into the vulnerable 10-year-old Ben while Valentine Olukoga as his slightly older brother Obembe exudes a more grown-up swagger that masks his own fear and confusion.

Under director Jack McNamara, the show is fast paced and frenetic, with quick-changes between characters that can make it hard to follow on occasion. The focus on the brothers themselves, paring back much of the detail of village life and the 1990s backdrop of Sani Abacha’s military regime, results in it becoming more of a psychological study. This is powerfully enhanced by the abstract set, designed by Amelia Jane Hankin, using a line of metal poles and hessian sacks, and the atmospheric lighting design by Amy Mae. This gives the production a dream-like quality, adding to the story’s near-mythic qualities, exploring the bonds of family and the individual’s ability to defy fate.

Running at Assembly George Square Studios to 27 August 2018 and then on tour.

BOOK NOW FOR THE FISHERMEN