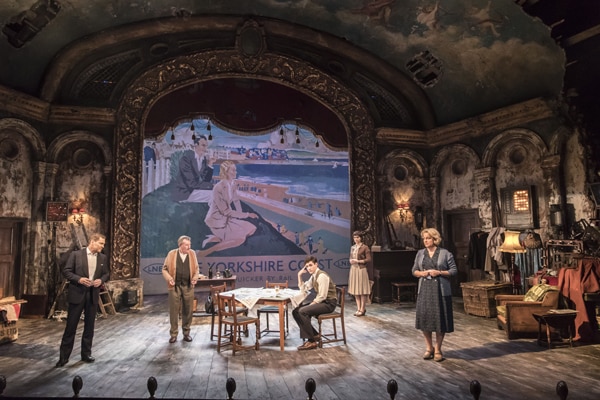 If I could visit a period in history, it would be Dickens’ 19th Century London. Dressed as a boy in a long trench coat, I would sneak into the song and supper clubs to sip on gin and to suck on a fatty pork chop; or, I would sit in the gallery of some music hall, looking down upon the singers and the male impersonators, before stumbling across cobbled streets in November fog to the cheerful ditty of ‘My Old Man’ swimming in my head. Vesta Tilley, Hetty King and George Robey graced the music hall stage but, by the 1950’s, the once popular variety entertainment was being forced into the shadows by rock and roll, radio and television. “The music hall is dying,” said playwright John Osborne, and it is his ‘The Entertainer’, a brilliantly performed play paralleling the breakdown of the British Empire and the decline of music hall, which concludes Kenneth Branagh’s season at the Garrick.

Framing the piece is Christopher Oram’s cleverly poignant set design, symbolic of a perished music hall and an unstable nation. A rusty proscenium arch with its ripped red curtains looms over the piece; discarded suitcases and an abandoned ventriloquist dummy are scattered on the sides of the stage, and it almost feels as if the ghosts of Vesta Tilley and Dan Leno are hiding amongst the deserted costumes. Into the spotlight steps Archie Rice (Kenneth Branagh), a tax-dodger, adulterer and struggling music hall performer. His daughter, Jean (Sophie McShera), arrives unannounced to the home he shares with his second wife, Phoebe (Greta Scacchi), and his father Billy Rice (Gawn Grainger), who was once a successful hall performer himself. Discussions of anti-war rallies, heated debates on the backdrop of the Suez Canal crisis, and the angst caused by threats to Archie’s soldier son – Mick, are interrupted by witty jokes, songs and tap routines performed by Rice himself; a jazzy live band accompany him and his dancers are scantily but stylishly clad in feathers and sequins. But, when his son – a prisoner of war, is killed, and when his father interferes with his relationship with his mistress, Archie Rice is forced to decide: leave for Canada, or face prison for unpaid taxes.

Greta Scacchi gives a prominent performance as a highly sensitive yet witty Phoebe, and Gawn Grainger’s Billy Rice is grumpy, sarcastic and totally endearing; Sophie McShera as Jean – a character on the cusp of rebellion, brings the same like-able sweetness as in her role of Daisy in Downton Abbey. But, above all, the mesmerising Sir Kenneth Branagh is King of his craft, an actor of remarkable calibre, truly exciting to watch. His Archie Rice (a role originally played by Laurence Olivier) is dismissal, selfish and stuttering, and offers the smoothest of transitions from domestic drunk to his camp and awkward stage persona. The clumsy jokes and splutters from Rice in moments of self-conscious uncertainty are cleverly woven into Branagh’s performance, thus emphasising the music hall performer’s struggle to win over an audience who were in growing favour of the more predominant rock and roll scene. Branagh is so meticulously natural and organic that it is easy to forget that his performance is scripted. Wonderfully directed by Rob Ashford with obvious Brechtian influence, this Archie Rice re-creates the performer-audience relationship so unique to music hall. 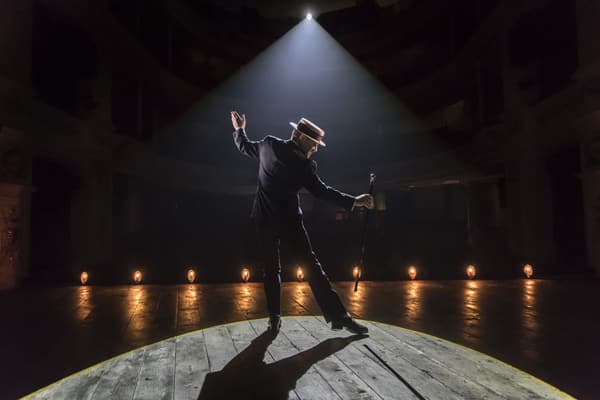 Leaving the theatre, I was no more clued up on the Suez Canal crisis than I was when I took my seat, but ‘The Entertainer’ is exceptionally relevant to current political crises. The script is very wordy with more than one lengthy monologue, but I like a play that forces me to engage my brain. With such extensive dialogue, there is always a fear of tedium but with this cast and this script – not a chance. With the help of Neil Austin’s theatrical lighting design, Archie Rice’s dancers and the live band, ‘The Entertainer’ offers a stylish pizzazz which is, actually, a real shame to miss.

And, anyhow, I could watch Sir Kenneth Branagh eat a bowl of nuts and still be in awe of him.

‘The Entertainer’ plays at the Garrick theatre until 12th November 2016

BOOK TICKETS FOR THE ENTERTAINER AT THE GARRICK THEATRE