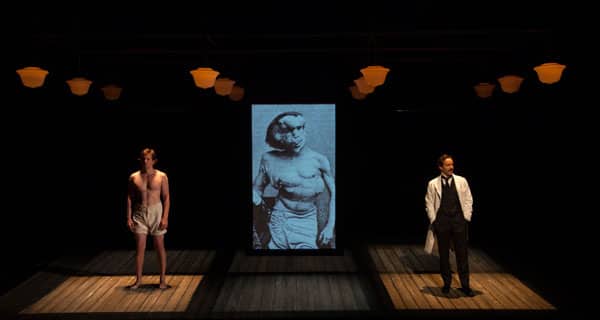 The other women we have glimpsed are all traditional Victorian types; prim, precise, certain of their station and what is expected of them and what they themselves expect. They are nurses or teachers or missionaries, or the shadows of exotic slaves being abused by their touts. This one is different. Somehow she shimmers and glides, like the costliest silk wafting in a zephyr. She is an actress, famous, and used to being adored. She displays the tricks of her diva trade to perfection in her first scene, very humourously.

Will she meet with John Merrick, the man known as the Elephant Man? She is told he has never touched female flesh – might she give him her hand to shake? One of his hands is not deformed, quite graceful says the smoothly assured Doctor Treves. She considers it, assents and then practices how she will thank Mr Merrick for the meeting. She tries the phrase any number of ways, to great comic effect.

But when she meets him, it is not as she expected. This gnarled, unnaturally misshapen man is gentle, open, honoured. And when, finally, she takes off her glove, and they shake hands, she is not acting anymore. She has come across something, someone, utterly incredible. Her touching his bare flesh, his good hand, is the most extraordinary thing that has ever happened in either of their lives. Watching the moment unfold is an astonishing moment of pure theatrical joy.

At first glance it is a simple historical tale with a couple of central star turns; unremarkable fodder but capable of reaching glitzy heights. Ellis sees beyond that though, and although the casting is undeniably starry, this is a thoughtful, incisive and ultimately shattering meditation on tolerance, convention, acceptance and love. The Merrick character is a metaphor for something that is different, something made by God but not in his image, someone society doesn’t want to tolerate and will pay to keep out of the way; someone who is, in any and every sense, different.

At a time in our lives when, amongst other ongoing atrocities based upon difference, refugees are being shunned from the places they seek refuge, homosexual men are being thrown to their deaths from the tops of buildings by ISIS murderers, women are being mutilated or stoned to death for nothing more than falling in love, and minorities and immigrants are being collectively judged, The Elephant Man is a timely reminder that while different is hard, it is also critical – without difference, nothing changes.

Wisely eschewing elaborate make-up, prosthetics or costuming, Ellis opts to rely upon simple staging and skilled actors. It’s a wise maxim in horror films that the less that is seen of the monster, the scarier the overall effect. Here, the notion of Merrick’s horrifying appearance is carefully established using different techniques: he is first heard making weird animal-like sounds behind a screen; then, we see the extraordinary look of incomprehension and despair on Dr Treves’ face when he sees Merrick for the first time and we know, absolutely and incontrovertibly, that he has seen something nightmarish.

Then suddenly Cooper is there, silent and still on stage, wearing only soiled underwear. As Dr Treves shows slides of the real Merrick, Cooper distorts his handsome features and becomes what Treves has talked about and shown. His mouth is a permanently open wound of pain; his right arm at an odd angle and his right hand gnarled, the fingers entwined into uselessness; his head is at a peculiar painful angle and you believe you can see the weighty mass that is causing it to be at that angle; his back is out of alignment; his bare feet are wrongly angled too and one leg is completely useless; he can only walk with a cane.

Once he has established the physical restrictions and contortions, Cooper never relaxes; he holds true to the standard he sets at the outset all through the play. Treves makes clear that his face is such that he can betray no emotion using it; Cooper runs with this. It’s his eyes that do the work, conveying pain, betrayal, fear, hope, love, generosity, wisdom, resignation, intelligence and yearning. Cooper is absolutely extraordinary to watch.

There are many moments of absolute pleasure: the moment Cooper questions whether the hospital aide who came to laugh at him should be dismissed; the discussion between Cooper and Patricia Clarkson’s Mrs Kendall about Romeo and Juliet; the simple joy when he receives Christmas presents; the extraordinary moment when Clarkson takes his deformed hand and places it against the breast she has bared to permit him to look at a naked female; the moment Cooper decides he has had enough of his life. In each of these moments, but not just these, every moment, Cooper’s eyes dazzle with their depth and dexterity.

Clarkson, too, is immaculate and extraordinary in every way. She charts the progress of Mrs Kendall from vain actress to kind, luminous humanitarian with ease and measured aplomb. Her scenes with Cooper are beyond delicious, acting of the highest order. Watching fear and tremulous expectation engulf her as she disrobes for Merrick is as lustrous and scintillating a moment in the theatre as any I have seen.

As Dr Treves, Alessandro Nivola is pitch-perfect. He manages the difficult task of being ostensibly in charge of Merrick’s welfare while also making clear that Treves learns a lot from Merrick and is constantly plagued with doubts about his skills and worth. His unspoken love for Mrs Kendall is beautifully observed as is his rage and subsequent deterioration following the moment he captures Merrick and Kendall having their transcendent moment of illicit intimacy. Nivola makes Treves real and conflicted, where he could so easily be stuffy and tiresome.

The cast is excellent all round. There are no rotten apples in this barrel.

Henry Stram is exactly right as Gomm, the hospital administrator who rules with iron discipline and an eye on sponsorship and public perception; he is happy for Treves to help Merrick but only while he and the hospital benefits. Anthony Heald is in terrific form as the ghastly Ross, who “rescues” Merrick from the poor house and then makes a living from him while treating him worse than a dog; he also plays Bishop How who insists on ministering to Merrick’s faith despite Gomm’s disdain for his calling; Kathryn Meisle is wonderful as the know-it-all-seen-it-all-can’t-be-repulsed-“I’ve tended lepers” nurse who can’t bear to be in the same room as Merrick and then, later, exquisitely evokes royalty as Princess Alexandra; Scott Lowell impresses in a range of small roles.

The design for the stage, including projections, from Timothy R Mackabee is spare but precisely sufficient. As Cooper suggests Merrick’s condition, so Mackabee’s set suggests the various locations where action occurs. Screens move across the stage to create particular spaces and this, and the use of furniture, is efficiently and quickly done so that the fluidity and propulsion of the narrative is never impeded.

Clint Ramos has designed especially beautiful costumes, particularly for Clarkson and Livola, which work their own magic in establishing notions of period and class. Philip A Rosenberg’s lighting is simply terrific; the image at the end of Act One particularly haunting because of it. And there is excellent music and sound from John Gromoda.