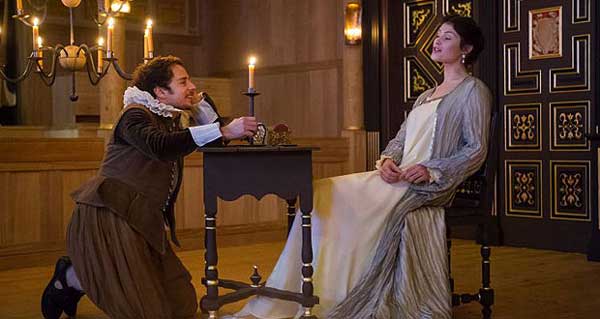 John Webster’s play, The Duchess of Malfi, has always seemed a difficult play to love. So often it is presented as a star vehicle for a great dramatic actress or is conceived and played as a tragedy in the league of Hamlet or Othello. In truth, however, it is neither of those things as the captivating and thoroughly (admittedly surprisingly) entertaining production opening the Inaugural season at the Sam Wanamaker Theatre, directed by Dominic Dromgoole, proves quite conclusively.

It’s a funny, silly, faux-horrific treat: the natural progenitor of the “stab-in-the-dark” genre and, more importantly, Grand Guignol. You can see almost a clear straight line between Webster’s play and Sondheim’s Sweeney Todd. And Dromgoole makes this profoundly clear in a quite revelatory production with a seriously classy cast.

It is interesting to watch the audience, many of whom seem to have come for “worthy, important tragic theatre”, be at first startled and then seduced by the comic undertones which compliment, perhaps even make possible, the tragic aspects of the play and the characters. These are not laughs borne out of embarrassment; they are laughs earned by a cast mining the material for its intrinsic worth.

As an opening feast for a new theatre, it is scarcely possible to imagine a better choice than this production of this play.

As the vicious, self-interested, incestuously minded Duke Ferdinand, David Dawson is simply wonderful. He finds every corner of the character and flushes out its full potential. He is magical to watch, utterly enthralling. Malicious, capricious, spiteful, mischievous, jaunty, haughty, murderous, insane and sexually voracious (where there is a sibling involved anyway) his performance is the anchor of this production. The moment when he interlaces his fingers with that of his Cardinal brother’s was toe-curling. It is a performance of intense nuance and wild broad strokes. Fascinating and compelling. He is a star on the rise.

In the often thrown-away role of Antonio, Alex Waldmann is every bit as good, living up to the promise and heights he achieved in his seasons with the RSC. Vocally, he was the most assured of the cast, effortlessly conveying the sense and the importance of the text. His early scenes with the Duchess are pure delight; a fine gossamer sheen of joy based on pure love which serves as a complete counterpoint to the other “loves” at the heart of the action. Waldmann is an excellent romantic lead and has come a long way from his first tentative steps in the Donmar’s Twelfth Night five years ago. Another one to watch.

In the titular role, Gemma Arterton is surprising. At first, she seems too lightweight for this great tragic role, but as the piece progresses you come to see that, actually, she suits it very well. Her scenes with Waldmann are full of warmth and joy; her scenes with her brothers full of unexpressed tension and conflict. She has a natural energy which the candlelight somehow emphasises and she, almost literally, lights up the stage. She does seem to be “acting” a trifle too earnestly at times and would be better to let the character embody her as most of her co-stars do. No one will ever say that she was a “great” Duchess of Malfi, but she was great in the Duchess of Malfi. She dies spectacularly well and handles the difficult “revival” moment extremely cleverly, to great effect. But it is her instantaneous mood changes – such as when she spies her murderous brother in her hand mirror – which really pay dividends theatrically.

Sean Gilder can be hit and miss but in Bosola here he is most definitely a palpable hit. It’s quite a thankless role, having much of the narrative to shoulder and little of the terrific moments, but Gilder imbues the whole experience with a rough, common and thoroughly believable intensity of purpose so that some of the more laughable plot points seem like turning points in history. It is a fine, mature and ripe performance in every way.

Also in the hit or miss category is James Garnon (most recently the lamentable Don Pedro in the unspeakable Measure For Measure at the Old Vic – yes, the one with La Redgrave) who here plays the wily, manipulative and Machiavellian Cardinal. Actually, it’s the best performance I have seen him give and at its best, he is quite sensational: the scene where he murders his mistress is electric and he has an wonderful, almost Noël Coward way with throwaway comic lines. He worked easily with Dawson to create a pair of brothers for whom the word excremental would be too kind. There was a savage humour to his delivery which was welcome and he has no issue with the vocal demands of the text. And yet…something ineffable was missing; the unifying whole that would cement the character is just not there. It’s not fatal, but it is puzzling – because clearly, pushed hard enough, Garnon can deliver the goods. He should.

Denise Gough is remarkable as the Cardinal’s mistress. Everything she does is perfectly judged and leaves a real impression. Her realisation that her lover has poisoned her was shockingly authentic and, like Arterton, she gave good death throes. In the much less well written role of Cariola, Sarah MacRae is just as good. She too dies with desperate clarity and her ability to portray the simpering duplicitous maid (with almost nothing to go on) is very impressive.

There is excellent work from Brendan O’Hea, John Dougall, Dickon Tyrell (a masterful moment alone on stage playing with his toys provided one of the evening’s greatest laughs) and Paul Rider.

Claire Van Kampen’s music works well and the players do it more than justice. The final company dance, courtesy of Siân Williams is precise and appropriate and very well executed.

Two moments of staging were especially remarkable: the completely in-total-darkness scene where the Duke gives his sister what she thinks is the amputated hand of her husband, and the ghoulish arrangement of the waxwork duplicates of the Duchess’ husband and eldest child, complete with a trolley of small candles for maximum heighten-horror effect. Great stuff.

Did I mention it was genuinely funny? It was. Laugh out loud funny too. And often.

Using period costumes (Jonathan Fensom) was a sensible move and worked well in the space. Hopefully that will be the norm in this Playhouse.

This is the start of a whole new range of possibilities for the Globe complex – and a really entertaining and desirable one.

Reimagining a classic text – is there anything a director can usefully do that is better than that? Bravo Dominic Dromgoole.