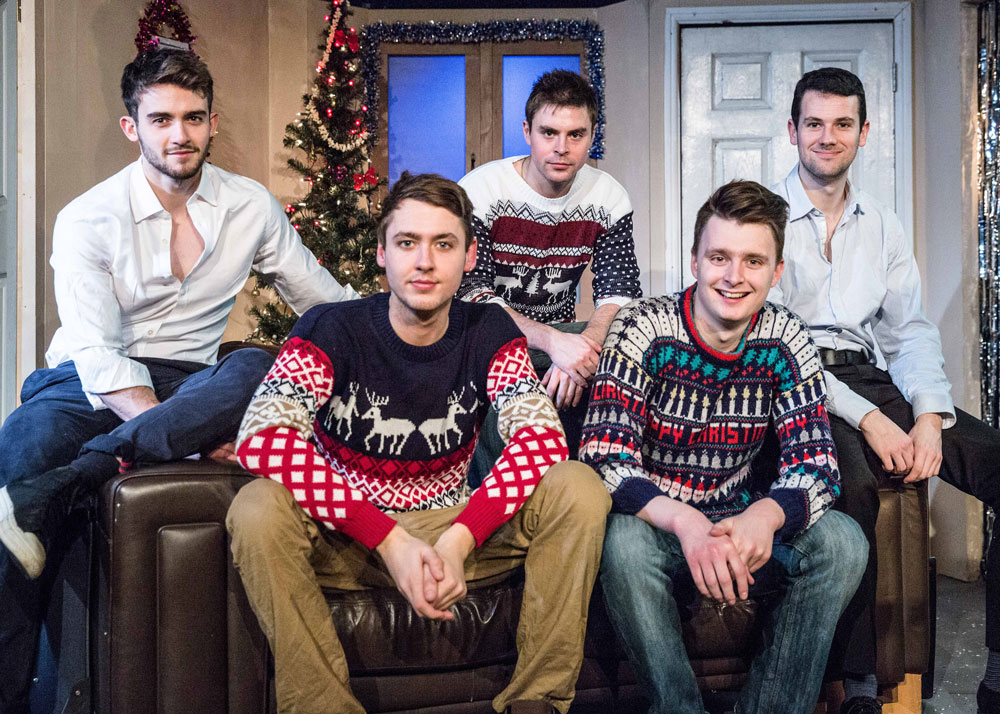 Well, here’s something new: sixteen years after it was a hit Off-Broadway, a spirited gay comedy of manners comes to London, and arrives in triumph, despite there being hardly a trumpet to announce its British premiere. But Buddy Thomas’ five-hander set in the communal living room of a Staten Island flat-share comes perfectly on time: set at Christmas time, it features a bona fide Santa Claus impersonator, a tree with lights, tinsel a-plenty, greeting cards and wrapped presents; it also boasts more than sufficient ghastly personality clashes and fallings out, drunken misbehaviour, inappropriate amorous entanglements, horribly inept revelations, fights, recriminations, tears and guilt to fill even the most capacious Christmas stocking. Moreover, laughing at other people’s yuletide misfortunes is clinically proven to be better than suffering your own in silence, so the play can rightly claim to be a kind of useful ‘group therapy’, especially apt in this season of enforced jollity and compulsory merriment. 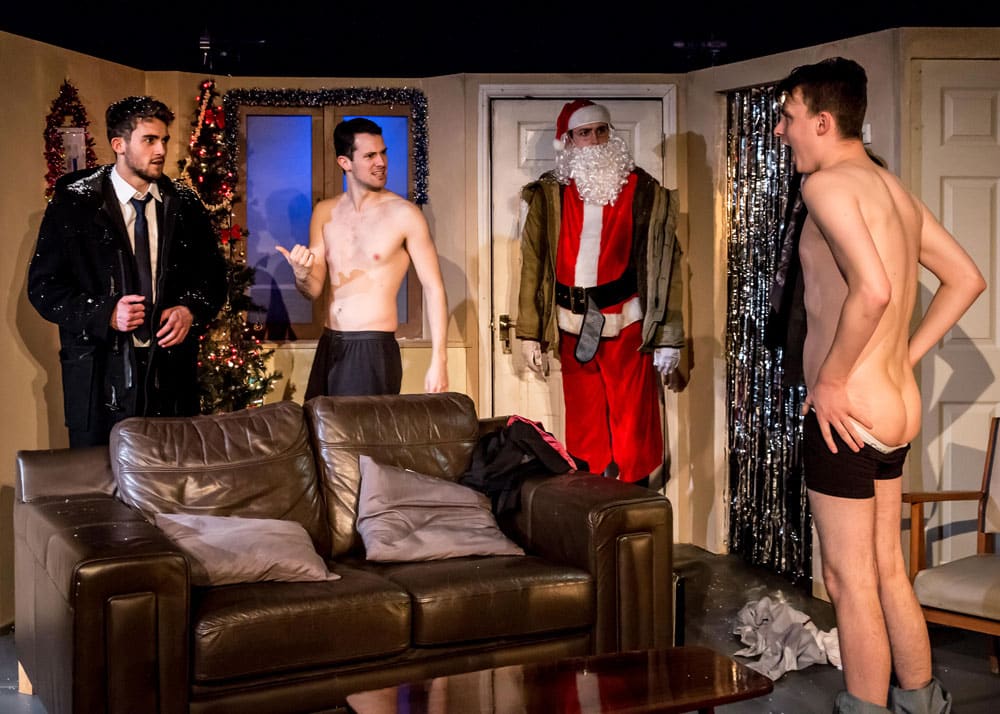 Richard Lambert, he of a thousand lighting plots, is the impresario whom we have to thank for tracking down Mr Thomas and dragging his work across the Atlantic and bringing it to the attention of the indigenous theatregoing public. Thomas is a well-known author in the States, and his work has been performed all over the world (even in that place we only speak about in whispers now, … Europe). Why, then, is he unaccountably absent from the schedules of UK theatres? One can but wonder. Fortunately for him, Mr Lambert has discovered him and mounted a handsome production of this clever entertainment. 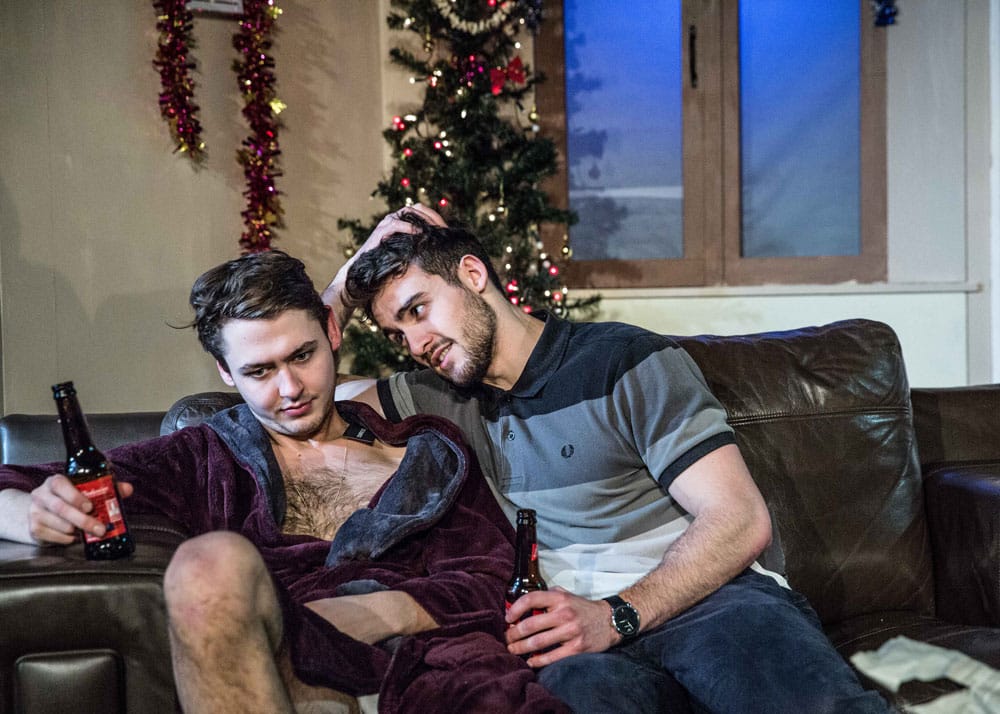 We are in the rented apartment of Buck (meltingly handsome Jack Armstrong – and that’s his real name, not something taken from the pages of Vanbrugh) and Terry (smart, bitchy queen of the devastating one-liner, Samuel Tucker). The mis-en-scene presents us with an estrangement: Buck’s inamorato, Alex (lanky, young Jimmy Stewart throwback, Kit Lloyd), has shacked up with them while his erstwhile soul-mate Matt (gorgeous and yet very intense Tim Jennings), is away for a year in the road company of the musical of ‘Salem’s Lot’ (which – as far as we know – is still touring). Into this mix pops Roger (straight-as-a-die Myles Rogerson… yes, really), a Staten Island Ferry pick up of Terry’s. Things are fraught enough between all these, until – quelle surprise! – Matt takes advantage of a holiday layover in Idaho to whizz back to the Hudson with the intention of rebuilding bridges between him and Alex, and actually has the effect of provoking a final meltdown of the whole rickety domestic situation. 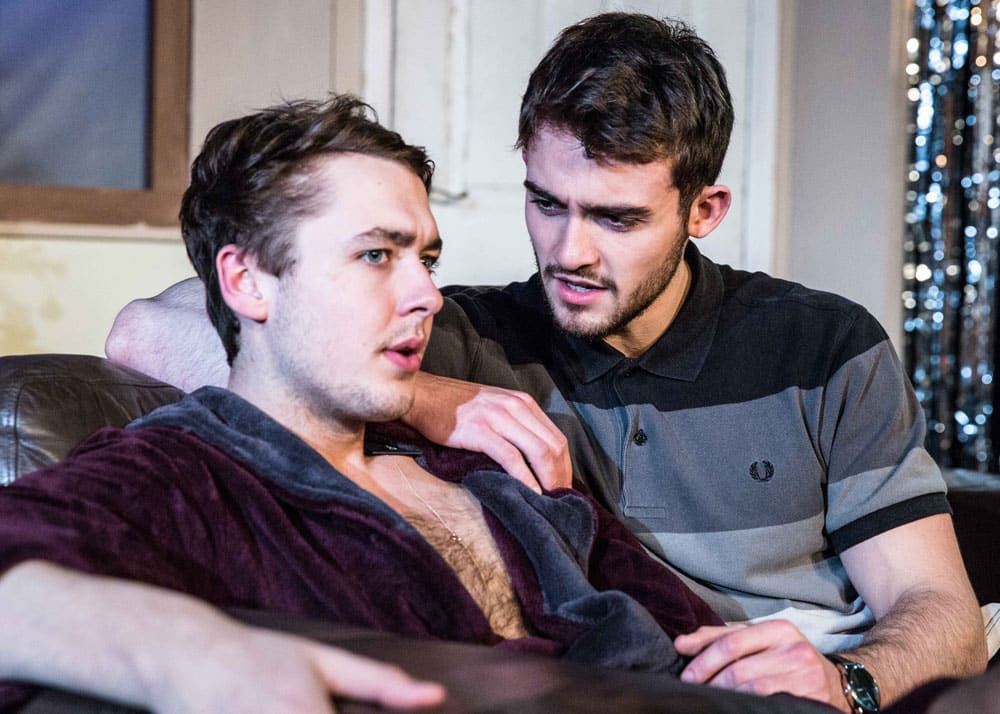 Imposed onto this tawdry material is a sophisticatedly constructed three-act comedy (each act elegantly sub-divided into three scenes), which makes the fullest possible use of its constituent parts (including a set with no fewer than four points of entry or exit – five, if you count the window, which is used), and puts into the mouths of its ordinary characters words of magical charm. The repartee crackles; the narrations hypnotise. Yet, the smart dialogue never feels it belongs anywhere other than right here, right now, and we are delighted to find ourselves believing that these characters talk like this all the time. That the young cast do more than justice to the wit and also the humanity of the story is a triumph for which we have to thank the brilliance of director Robert McWhir, who gets his youthful charges to play some pretty high comedy perhaps not quite as if they had been doing it for years, but with very much more confidence and aplomb than is often seen amongst beginners in the profession (drama schools, please take note). As for the subject matter: there is but a brief flash of nudity, and a gentle smattering of profanity, a couple of snogs and a pair of tasteful Bruce Weber photographs on view, and that’s about it as far as its raciness goes. All the rest is in the heels upon which the conversation struts and strides. Frankly, Mrs Grundy, there is nothing here that would look terribly out of place in the Theatre Royal Windsor. 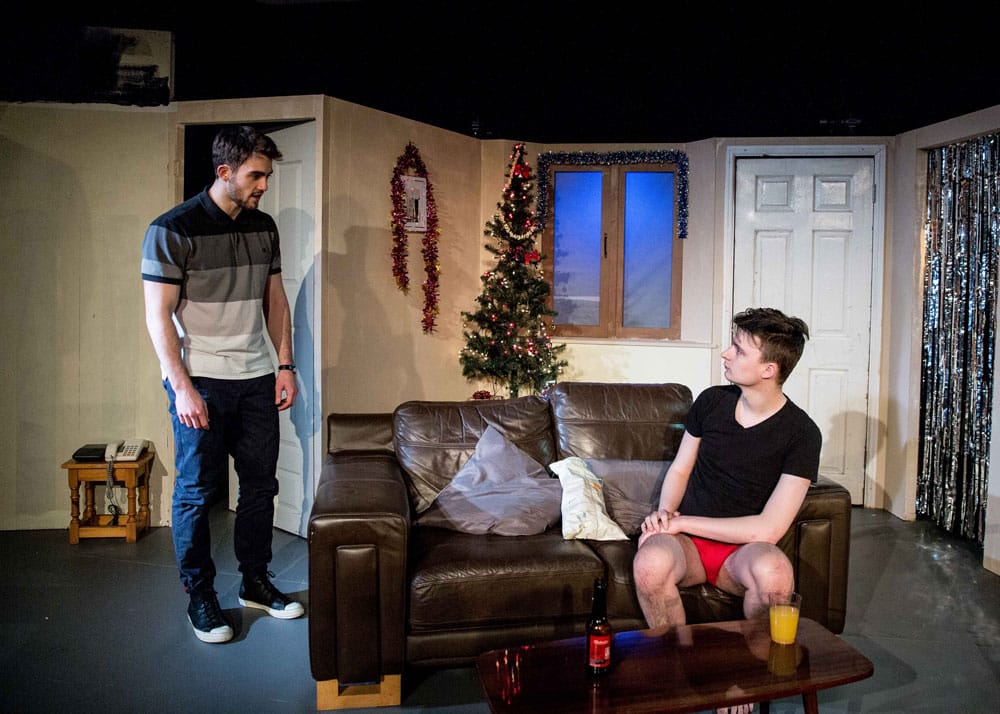 Yes, there is a certain modesty about the budget, and the rehearsal period has been pretty much limited to a week, so there is a rough-and-ready, ‘Rep’ feel to the production. Nevertheless, Lambert puts every penny to good use, and as ‘Technical Designer’ produces the staging and lighting with some accomplishment. Having seen the show twice, first on the Tuesday, and then two days later, the second viewing confirmed my favourable opinion of the piece and I urge you not to let this slip by. Go, and when you go, bring your friends with you: they will like you all the more for it. The lucky ones amongst us have already seen this marvellous hoot in Clapham: next week, it entertains the masses at The Pleasance in Islington. Make sure you see it! Your endorphins will thank you forever. As for Buddy Thomas, I suspect we in the UK are going to hear much more from him.