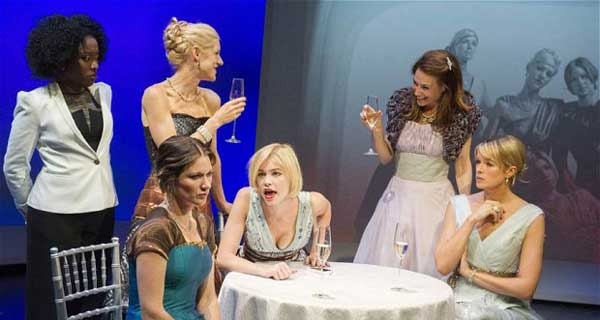 There are many wonderful plays with themes about sisters and the special relationship they can have or choose to reject. King Lear, Three Sisters, The Secret Rapture, Mornings At Seven, A Delicate Balance, Brighton Beach Memoirs, A Streetcar Named Desire, Seven Little Australians, The Sisters Rosensweig, Little Women, Gypsy – to name but a few, across a range of genres.

The Colby Sisters, written by Adam Bock, and now having its world premiere at the Tricycle Theatre, in a production directed by Trip Cullman, is not such a play.

If the title evokes memories of The Colbys, the Dynasty spin-off series, they are not misplaced. For this is unmistakable melodramatic claptrap but, unlike The Colbys, it seems to think it is important theatre, dealing in new and interesting themes.

The titular sisters are a ghastly gaggle of five, with names which speak volumes about their stupid empty lives and the society status they hold, although not all of them revel in it: Willow, India, Gemma, Garden and Mouse. If you can’t pick the leader from that line-up, there is something wrong.

Yes, it’s Gemma – the richest, most controlling, most appallingly misguided of the five. The one without the “odd” name. The others suit their names in most respects: Willow is not strong, bends with the wind; Mouse is gorgeous but timid and constantly darting around hoping to score the cheese; India is hot but overwhelmed; Garden is out of control and needs constant maintenance. They all live in the glare of public attention – paparazzi follow them constantly; sunglasses shield them from the common folk.

They are all attractive; great legs, fine hair, figures like Audrey Hepburn – and good frocks and outfits (courtesy of Richard Kent). They all live in Gemma’s shadow, in various stages of rebellion, until a death leads to sibling revolt.

There are five scenes. The first two are entirely pointless, apart from a shocking suicide. The remaining three scenes have some interesting material, but nothing revelatory, especially dramatically interesting or clever. In the end, these are stock characters doing moderately interesting things, all of which is alarmingly predictable.

Bock does not seem to know any interesting women of substance – because his creations here are dull, vacuous and, frankly, boring. If they have one facet, they are lucky.

The acting is hampered by appalling, apparently disinterested direction. Cullman does not ensure that each sister is clearly delineated or that each of the five characters is fully realised, understandable, real and empathic. Even dull characters can be real.

There is an abundance of shrill shouting, tiresome arguing and pedestrian staging. It’s like watching Revenge but without the irony. Or the humour. Or the style.

Ronke Adekoluejo is delightful as the almost silent, ever watchful, utterly mistreated, personal assistant/slave to Gemma. She makes much out of nothing and is the only actress who tries for truth in every aspect of what she does.

The most impressive aspect of the entire proceedings is the fusion of sound with the miming of tennis shots in the fourth scene. You really believe they are playing. It is singularly impressive.

And I do mean singularly.

The Tricycle does varied and interesting work. Rather than spend resources on lacklustre American tripe, perhaps it should look at new Australian writing? There is more than one colony from where content can be drawn for English companies interested in exploring different horizons.