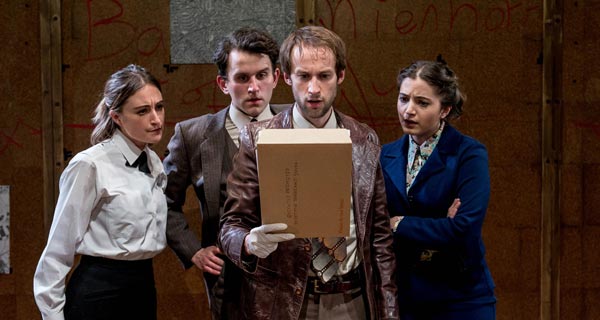 Bombs are going off in London. It’s 1970 and Scotland Yard decides to set up a small, secret unit of specialist officers in an attempt to track down the perpetrators of the bombings. Like all good extremists, the perpetrators, who call themselves The Angry Brigade, write mysterious, anonymous letters to the authorities. Steeped in tradition, protocol and procedure, the small team of police officers work frantically and intimately, determined to locate and arrest their quarry.

Along the way, they dabble with informants, an unreliable Press (at one point The Daily Mirror offers a reward for the capture of their quarry and blows their own cover) and concepts such as Association and Psychogeography (a way of seeing urban surroundings differently, free form rather than rigidity). This last sees them consider an office chair and the non-traditional ways it could be used.

The closer the unit gets to their quarry, the more understanding they have of the world from whence The Angry Brigade came. They encounter communes where men and women live and love together freely, unconcerned about the constraints of “ordinary” life, swapping partners, being fluid in their sexuality and caring for others and their children. Do these encounters fuel their investigative endeavours or somehow corrupt them?

This question comes into sharp focus towards the end of Act One of The Angry Brigade, James Graham’s 2014 play now having its debut London season at The Bush after premiering at Plymouth and touring the UK. Graham’s play is here presented in two Acts, both very different. The first is more formal in construction, a conventional unfolding of a detective story. The second is quite anarchic, free-flowing and surprising. This makes complete sense as the first Act deals with the police investigation; the second tells the same story from the point of view of the foursome who have been bombing London. It’s a sound approach in terms of form; inventive, yet reflecting the content in a simple, tangible way.

There is a moment, however, towards the end of the first Act where there is a brief elision: where one world smashes into the other. It is never clear whether this is some sort of dream sequence or an intense representation of Psychogeography, focussed on human bodies rather than urban landscapes.

Unfortunately, as directed by James Grieve, that climactic moment is as preposterous as it sounds. There is no organic progression to that point; it seems presented as a way to shock the audience. It doesn’t shock, but it does mystify.

The play strikes one as more comic, at least in the first Act, than it is played here. More Thin Blue Line and less Z Cars might have helped. Graham’s writing, his focus on convention and protocol, should guide proceedings, and it does, at least to start. The opening scene goes a long way in the right direction, although the characters, all police, could afford to be more stereotypically, as well as adventurously, quirky and fussy.

Grieve seems to focus attention more on the straightforward detective story and, while this requires focus, it does not seem to be Graham’s focus. The story is compelling, particularly if, as was clearly the case for most of the audience, the details from real life have sauntered off into the mists of time. Graham’s interest appears to lie in the Seventies, the fractured politics, the changing of the intellectual guard, the rebellious spirit of the Seventies. Disrupting order is a prime theme, both in narrative and structure; not in a linear sense, but in terms of expectation, assumptions, what is “right”. Equally, there is an all pervading sense of correlation with modern politics and the anger of the community about their political leaders.

While this is most clear in Graham’s deliberately provocative, explosive and fragmentary second Act (one has the feeling, watching it, of a bomb going off), it is equally clear in the more obviously conventional first Act. Grieve, however, entirely fails to get to grips with this and, as a result, the flaws in the piece are thrown into sharp relief, and the more subtle, more interesting aspects do not get the attention they deserve.

Harry Melling, a supple and intriguing actor, always reliable, does the very best work here. He plays a succession of characters in the first Act, all very well, but there is a clear sense that he could play the extremes of each character more acutely, and wants to do that. But he keeps to Grieve’s intent. Some characters – the biscuit dunking Commander, the nervy snitch, the obfuscating Prophet – are vibrant and memorable, but an unmuzzled Melling would be something quite startling. In the second Act, Melling plays Jim, the terrorist trapped in Hollyoaks, but he is the one who most completely captures the sense of orgasmic pleasure felt by the Angry Brigade as they take on the Establishment. He is fascinating to watch, completely immersed in every character. Riveting.

As, first, Smith, the fresh horizons police officer, and, then, John, the committed, charismatic centre of the Angry Brigade, Mark Arends is in good form. Both characters are distinct, complete wholes, but each shares an intensity, a vibrancy, a sensibility which makes the differences between them seem less. This is clever on Arends’ part, but, again, more extremity in the playing, more risk taking by Grieve, would have paid real dividends.

Neither Pearl Chanda nor Lizzy Watts really shine in their various roles. Chanda has the difficult task of playing Anna in the second Act, the member of the Angry Brigade who comes to question their aims and ends and who ultimately betrays them. The most complex part of Graham’s writing concerns Anna and her straying from the anarchic path; the role needs more nuance, pain and clarity than Chanda conveys here.

Partly, though, that too is down to Grieve. The direction is so obsessed with making the second Act unexpected, chaotic and loud (honestly, one more slammed metal filing cabinet and one would be setting up The Angrier Brigade) that the critical line involving Anna’s disaffection dissolves.

Lucy Osborne’s design is simple and reasonably effective, although the use of projections is haphazard – depending on where you sit, the projections may not be readable. They move very quickly at times too, which, if deliberate, is counter-productive. What is the point of projections that can’t be read – unless the illegibility is part of the point. Perhaps that is the idea, but it seems misconceived,

On the whole, Grieve’s production simply does not do justice to either Graham’s script or the skills of the acting company. This is not to say that Graham’s script is necessarily terrific – but it is certainly ambitious and one suspects it has a scale and scope unrevealed by this production.

An interesting footnote to this production was seeing The Vote transmitted on More4 last week. Graham recycled the dunking biscuit in tea/dunked biscuit falling apart joke in The Vote. Perhaps it is his Hitchcockian signature moment for political dramas? Anyone got a script of This House to check?

The Angry Brigade runs at the Bush Theatre until 13 June 2015. Book tickets.