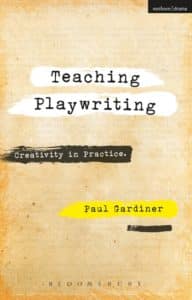 This is an excellent textbook, full of wonderful practical exercises that are useful to anyone connected with the theatre.  Essentially, it helps open up imaginative interpretation of dramatic situations in ways that are of use not just to writers, but to anyone confronting an already written text and looking for angles, often unusual and unexpected, into it.  In this sense, it is a handy addition to the repertoire of practical guides and theoretical approaches that are the mainstay of the industry and those working in it.

Paul Gardiner, as a practitioner, may not be that well known over here: I had certainly never heard of him before picking up this book.  He has taught playwriting in schools and now lectures in creativity, drama education and pedagogy in the Sydney School of Education and Social Work at the University of Sydney in Australia.  The book begins with a short general introduction, succeeded by a number of – very short – passages rapidly establishing the parameters of the study and his primary areas of focus.  Then, and this is the great strength of the book, he launches into his main purpose: sharing his immense practical knowledge of how to devise, structure, develop, review, refine and polish theatre scripts.  This constitutes the overwhelming bulk of the book, and there isn’t a page of it from which you won’t derive some value.

For whom is it intended?  Ostensibly, it is directed at writers and especially would-be writers of plays: the first, briefer, section is entitled ‘Playwriting and young writers’.  And, as an entree into that kind of activity, it’s fine.  However, since in the theatre, there is one main question that vexes and perplexes creatives and performers – ‘What is the intention of the character/author here?’ – this book directly supports and assists a step-by-step ‘deconstruction’ of what has gone into the creation of any dramatic text.  It is therefore of considerable interest to anyone, be they actor, director, designer, choreographer, or whatever, who engages with the process of physically realising on the stage (or screen, or airwaves) what the author has put into the script.

Thus, the second and by far the largest section of the book, ‘How to teach playwriting: the approach’, breaks down into slim, easily digested chapters which concern themselves pretty much exclusively with practical discussions of what works in the theatre, and how, and why.  Very often, these simple questions are the ones it is easiest to lose track of when one is attempting a production.  Underpinning all of this is his extensive professional and academic study of the subject.  There is no bibliography as such, but each chapter is followed by a list of references just cited, so you can follow them up easily and most pertinently.  As you progress through the book – or cast about in it freely, moving from one topic of interest to another, since there is no dependency on a linear argument – you encounter some of the same names again: David Edgar and Vigotsky notable amongst them.  Equally, he ranges between Aristotle and Ayckbourn, taking in many other major figures along the way, as well as a wide-ranging sweep of study and analysis from the academy.  There doesn’t seem to be any corner of dramatic life that doesn’t interest Gardiner.

So, a hugely enjoyable read in lots of different ways: for the beginner, for the student, for the teacher, for the practitioner.  A nice addition to the Methuen stable.