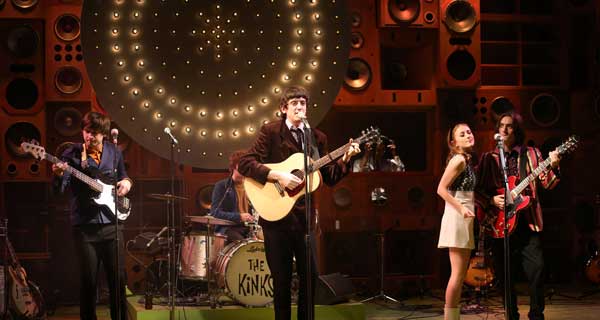 Sunny Afternoon
Hampstead Theatre, about to transfer to the West End
5 May 2014
3 Stars

What makes a good musical? What is the difference between a play with music and a musical? Does that distinction matter or really exist? Is an actor different from a musical theatre performer or is a musical theatre performer an actor with extra skills? What makes a new musical worthwhile? Is there a difference between a juke-box musical and a book musical? And if there is, should there be?

All of these questions are brought sharply into focus when one sees the premiere production of Sunny Afternoon (music and lyrics by Ray Davies, book by Joe Penhall) Edward Hall’s latest production at the Hampstead Theatre.

This is the story of the The Kinks, an English band which was a major force in music in Britain for three decades, from the Sixties to the late Nineties. Their back catalogue provides the music for the piece. The story of the band provides the narrative.

However, it is impossible to leave the production not wanting to immediately go and listen to the music the prolific Kinks produced. Is that the determinative indicator of a good musical? A thirst for the tunes that were included in the musical? If so, this production is a triumph.

Yet, the requirements of a great musical are wider ranging than that. At least since the time of Rodgers and Hammerstein, the score of a musical needs to be tuneful as well as progressing character and narrative. In the world of juke-box musicals, Jersey Boys is the high-water mark; there the story of the songs is intertwined with the songs themselves and the story of their creators.

In the last twenty minutes of Sunny Afternoon, Penhall, Davies and Hall get the balance exactly right and that sequence, from the moment guitarist Pete expresses doubt about remaining a band member to the finale, is magical, engaging, heart-warming: everything a good musical should be. And every performance reaches the right level in this section, vocally and in terms of honest acting brimming with heart. In this section, everything matters, everything is felt and everything works.

Small wonder then that the crowd goes wild at the final curtain and remains upstanding and hysterically joyful through the encore. They have witnessed that rare theatrical beast: a juke-box musical which works, at least in part, like a book musical, the familiar hit songs pushing the narrative and the characters ever onward.

Imagine then the result had the finesse and style of the final scenes been brought to the entire show? If the clarity, the seamless interweaving of song and narrative had been the constant?

But the first Act is patchy, with some songs clunkily studded amongst chunks of dialogue and others working well. Inconsistency is the vibe. It’s not ever dire or irretrievably dull, but nor is it what it plainly could be, as the final scenes make clear.

The beginning of Act Two, the scenes in America when the Kinks are touring, is fairly woeful, stuffed with both cliche and anachronism, and, most egregiously, the most disconnected the music becomes from the narrative, and the characters from their motivations and narrative truth.

In the first Act and the beginning of Act Two the piece seems more like a play with music. The words are the main driver; the music serves merely to punctuate or provide contrast. But in the last twenty minutes, it is definitely a musical, and a damned fine one.

Penhall is quoted in the programme as saying:

“Ray’s songs are uniquely suited to theatre, in a way no other songwriter’s work is.”

Really? One suspects that Bernstein, Rodgers, Sondheim, Flaherty, Guettal, Robert-Brown, Lippa, Shaiman, John, Tesori and Kitt (by no means an exhaustive list) all write songs uniquely suited to the theatre and better suited than those Davies wrote.

But perhaps this explains the central problem with this piece. Davies’ songs, as brilliant as they are, were not written for this piece and so, desire their inherent story-telling capacity, they need careful integration into a narrative that needs and benefits from them. Apart from the final twenty minutes, Penhall has not provided that narrative.

Edward Hall directs, but one suspects he thinks he is directing a play and not a musical. There is no musicality in the presentation, something it cries out for. Adam Cooper, though, provides excellent, deft and engaging choreography and the ensemble perform it lusciously.

The sound design from Matt McKenzie disappoints continually. The Hampstead Theatre is not a big space but the balance between voice and instrumentation is rarely correct, with the result that lyrics, especially those sung by John Dagliesh as Ray, disappear or are unaccountably muted. This is desperately shameful – for when you hear him, Dagliesh is impressive.

Ray is the central character here, so much is asked of Dagliesh and he is up to the task for the most part. Not enough time is spent on allowing the audience to like and empathise with him, with the result that the show seems more disjointed than it would were the audience in love with him, as surely they need to be. Dagliesh is confident and capable, but not winning enough and he does not play the role with the kind of heart a musical needs from its star.

Dagliesh’s co-stars have a better time of it. Their roles, though secondary, have more heart impressed upon them – to winning effect. Best is Ned Derrington’s Pete, the earnest, quiet guitarist who does not know his own worth. Derrington is terrific all the way, sings well and when he has his big moment in the second Act, he plays a blinder.

Just as good, as the irreverent up-for-anything guitarist little brother, Dave, is George Maguire who is just terrific, a ball of pent-up energy and blistering anti-establishment fury, all long lank hair and hedonistic indulgence. He is funny, but can turn on a dime and be truly serious – and he has an effortless tenor which adds verve to the music.

The final member of the quartet, the lazy wanker drummer Mick, sees Adam Sopp in excellent form. He is languid where the others are earnest or self-involved, dry and capable of extreme violence – the perfect encapsulation of an angry drummer boy from London.

Lille Flynn is beautiful, in every way, as Ray’s girlfriend/wife, Rasa. She sings sweetly and unerringly and brings real warmth to her every scene. Philip Bird plays a number of roles, all exceedingly well, but he is inspired as Mr Davies, Ray’s humble father.

Miriam Beuther provides a flashy set, but it does not really evoke the sense of the intimate interior journey of Ray, which is the key narrative driver here, or permit much in the way of credible venues for the multitude of places where action occurs. Unaccountably, the auditorium has been carved up to allow a long central thrust and then entrances through the audience on either side. But they remain unused for the most part and when they are used, the result is simply divided attention rather than any sense of closeness or spectacle.

But her costumes are another matter: they are divine and there are dozens of them. Colourful, period and perky, the costumes provide much assistance in telling the story of the time and place of these Kinks and their triumphs and tribulations.

There is a lot to like in Sunny Afternoon and overall the experience is more than satisfactory. It is great fun. Well worth seeing and hard not to enjoy.

But… It should have been an absolute triumph. Alas, Penhall’s book and Hall’s direction prevents that.