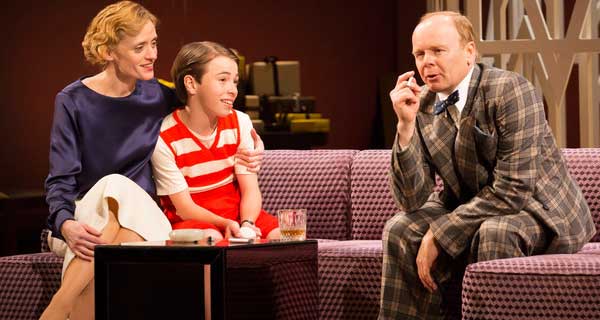 I do not often think, after seeing a production at the National Theatre, thoughts such as “I wish they had not cut that text so much” or “I wish that had moved at a slower, more languid pace” but such were the thoughts whirling through the mind after seeing Simon Godwin’s mesmerising revival of Eugene O’Neill’s Strange Interlude (a play which won O’Neill his third Pulitzer Prize) currently playing to lamentably small audiences in the Lyttleton Theatre.

Godwin’s work here is excellent; this is a sumptuous and elegant production which carefully exposes the themes and issues with which O’Neill grappled – in, particular, the notion of love and what it really means to love, and the crippling but ennobling and enabling power of unrequited or, perhaps more accurately, unfulfilled love.

Chief amongst the production’s many first class attributes is an astonishing set from the ubiquitous Soutra Gilmour which covers many locations but does so in a way which matches the emotional centre of the text. So, in the early scenes, when central character Nina feels trapped by her circumstances or the prevailing dominant male in her life, the sets reflect the notion of confinement, containment, solitude, and after Nina marries, the set opens up, allowing room to breathe. Then, when her husband is successful and rich, Nina’s world becomes both open and closed, reflecting her state, fluctuating between the release her son provides and the harnessing of her spirit that comes with marriage to a man she loves but is not in love with. The final scenes, which are full of sorrow but also splendid release and acceptance, are played in huge open spaces reflecting the power of the greatest mother of them all – Nature.

The sight of a full size yacht appearing from behind an Art Deco New York apartment is one that won’t fade for some time.

Gilmour’s work here, obviously on an extraordinary budget, is quite magnificent.

Utterly compelling and seductively luminous as Nina, Anne-Marie Duff is revealed as one of the greatest actors to appear on a British stage. Her physicality, her sense of inner complexity, her silences, her articulation of pain, her extraordinary ability to be several different Ninas, yet one whole; she has it all. This is one of those glorious, life affirming, live theatre justifying performances.

O’Neill uses a device in this play, by now familiar to audiences, where the interior thoughts of the character are revealed to the audience as direct address/asides and are in contrast to the stated positions of the characters – this must have been incredibly powerful in 1928 when the play debuted – and the one slight criticism about Godwin’s direction and Duff’s performance is that there is not enough care given to the distinction between the two; often confusingly, Duff elides from one state to the other, particularly in the first half of the play.

Matching Duff every step of the way, perhaps actually surpassing her because his part is less carefully constructed, less prime for great work, is the fabulous Charles Edwards who finds and nails every moment of comedy, pain and meticulous misery – his final scene with Duff is brittle, awkward and extraordinary.

Geraldine Alexander is wonderful as Duff’s mother-in-law, a woman so riddled with guilt and fear she destroys a handful of other lives seeking to prevent a recurrence of her own particular sadness. Darren Pettie provides solid work as Edmund, Nina’s real and never secured love and there is some marvellous work from Wilf Scolding as Nina’s grown son: his scene after the funeral in the final Act is remarkable for its intensity, honesty and clarity. It is a scene that only the hardest heart could remain unaffected throughout.

Jason Watkins, a fine actor in the right part, seems the odd man out here; as Sam, Nina’s husband but not the father of her child, he seems more caricature ( a strange mix between Mickey Rooney and WC Fields ) both in voice and fibre of being than character. This may be a deliberate Godwin choice and, if so, is the one mis-step here. It’s not that Watkins is bad; it is just that his performance does not suit or match the others, especially in the early scenes. In Act Two, his work more seamlessly matches the others.

Indeed, Act Two here is quite magical in every way, with only the slight oddness of the child Gordon and the inexplicable age of Emily Plumtree’s Madeline (she is about ten years too old) to break the shimmering web spun by this remarkable production. The pain of these characters and their journey is so exquisite, so languid, that one senses a slightly slower pace and room to breathe would have been beneficial to cast and audience alike – but that is to quibble.

Godwin’s sensational production will be long remembered – chiefly for being exactly what The National Theatre should be about all the time: first rate productions of first rate texts with first rate casts. The theatrical world’s other triple threat.