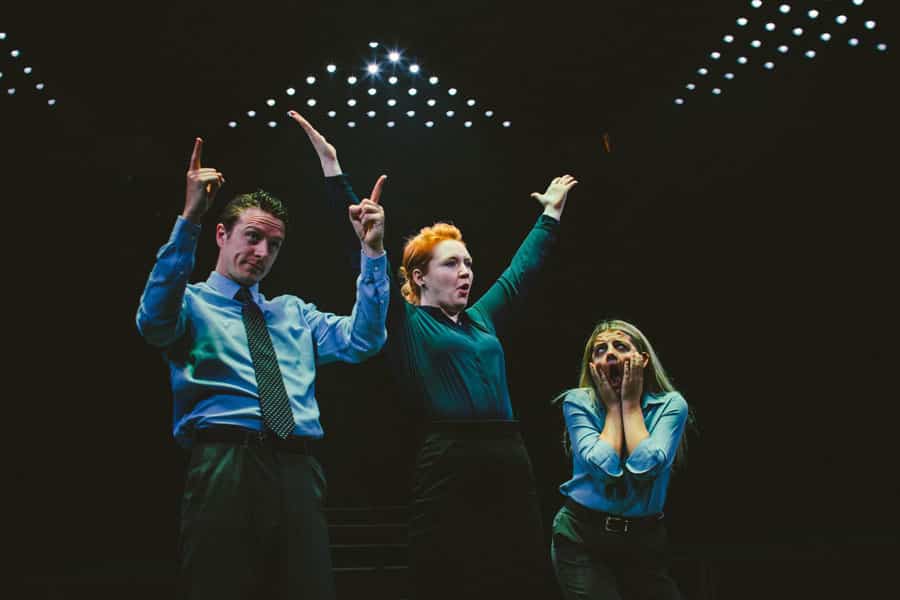 Boris Johnson may somehow be able to get away with joking that women in burqas look like pillar boxes and bank robbers but for the rest of us, the pressure to be sensitive to race, religion and sexuality is greater than ever. This hot topic is cleverly tackled in Vinay Patel’s razor-sharp new play, Sticks and Stones, where a senior executive discovers that keeping on top of current affairs through broadsheet newspapers and podcasts is not enough to keep her up to date on the nuances of language. Just one word used in the punchline to a casual joke in a client meeting is all it takes to put her career on the line, propelling her onto a spiralling trajectory where she unwittingly becomes a viral sensation and a far-right hero.

We never find out the unspeakable word that triggers her downfall, although we can speculate, reflecting the play’s recognition that what causes offence depends on factors such as the identities of those involved and where they live and that it changes over time at a pace that some find bewildering. The play’s protagonist is a single mother who considers herself a liberal and a good person, advising her young daughter that it is wrong to praise a woman just for being “pretty”, but pride stops her from fully apologising for her misjudged word, leading her to question her own probity and fitness to be a parent, fantasising about escaping the modern world for a hideaway in the woods free of the media and internet.

Katherine Pearce is excellent in the lead role, shifting from slick, overconfident businesswoman to a ball of confused agony, literally contorting with anguish as her career and life disintegrate. She is well supported in a variety of roles by Charlotte O’Leary, including a constantly exercising boss and an ingratiating vegan colleague, and Jack Wilkinson who particularly shines as creepy co-worker Fred who has craftily found a way of holding on to his job despite openly bigoted, far-right views – not unlike some of today’s politicians.

The energetic staging in the round of Paines Plough’s Roundabout theatre space keeps up relentless momentum under the slick direction of Stef O’Driscoll with movement by Jennifer Jackson and Simon Carroll-Jones. Key words such as “offence”, “apology” and even “word” itself are accompanied by a warning sound and colour change, signalling how everyday language can become a disorienting, overwhelming minefield. Not only are offending words never revealed, we never find out the protagonist’s name or where the action is set, confirming this as a modern fable about the challenge of remaining sensitive and respectful in an era of fragmented media and rapid cultural change.

BOOK NOW FOR STICKS AND STONES