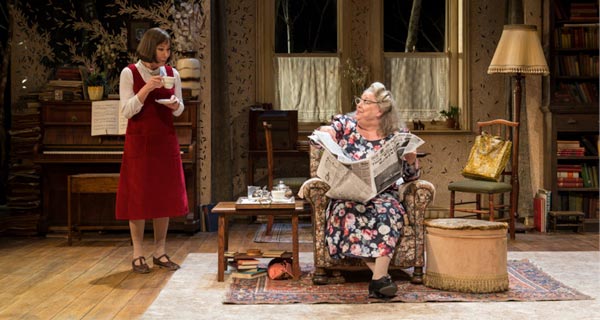 There are two quite remarkable things about Stevie, Hugh Whitemore’s 1977 play about the poet Stevie Smith, which, revived by Chichester Festival Theatre last season, is now having a London run at the Hampstead Theatre. Christopher Morahan’s beautifully judged production provides a third.

The first is the alchemy that Whitemore uses to thread poetry and prose together to form the gentle, reflective and insightful narrative. It is frequently impossible to know when a bit of dialogue ends and a snatch of poetry begins. Partly, this is a result of impeccable delivery. But, more than that, it is an effective way for the playwright to establish the small, domestic environment in the middle class suburbs where the poet wrote her legacy.

The play concerns both poet and poetry. By establishing what type of person Stevie was and how she lived and wrote, Whitemore provides context to illuminate that writing; by using some of the poetry itself to achieve that end, the effect permits both big and little picture comprehension, a sense of perspective that is wistful and revelatory. The matter of fact nature of the delivery of most of the poetry completes the effect: far from being an archaic, specialist and high-brow art form, poetry is possible everywhere and for everyone.

The second remarkable thing is the bravura nature of the role of Stevie. It’s not Hamlet or Medea, but it is a huge role, full of monologues and asks a lot of its star. It is a quiet, introspective part: there are no murders, rapes, blindings, revenge plots. Indeed, there is hardly an argument, no moment for incandescent fury to be unleashed in a show of Diva skill. No. The part is considered, contemplative, brimming with the minutiae of an ordinary life; the kind of play where the shock of Act Two is a choice between hearing about a botched suicide well after the event or wondering what surprise treat Aunt Lion will get if she eats her ham salad. (The junket prevails!)

What is remarkable about all this is how rare such writing is these days. Modern writing is obsessed with issues, fatal consequences and big picture ideas: themes bursting with consequence are the order of the day. “Biography” plays tend not to be very domestic in the 21st Century but the great strength of Whitemore’s play is its unrelenting domesticity, from which a great actress can unleash her skills and the work of a great poet be rediscovered. From gentle ordinariness, greatness is uncovered.

Morahan’s production gifts a third remarkable thing to Stevie: Simon Higlett’s perfect design. Superb in every way, from spot-on costumes to drinks trolley, to the sense of the leafy suburban surrounds of the very Sixties house that Stevie shares with her ageing Aunt Lion, the design effortlessly roots the play in the right time and place, allowing and inviting both nostalgia and complicity. Everyone has lived in or known someone who lived in a house like that. It’s warm, friendly, normal.

It is also something else. It’s a poetic representation of the house, not a realistic one. Not all the necessary walls are there; imagination is required to create the separation between hallway and reception room. But that is not the only poetic licence Higlett has relied upon. On one side of the stage, there is a sense of the bulrushes (picked long ago and nestled in a vase on top of the piano) having taken flight, spread along the wall, fusing with the outside environment – they seem like a wallpaper effect at first, but it’s not that. It’s a beautiful evocation of the ordinary taking flight, becoming all consuming. It works spectacularly well as a background feature for this tale of an ordinary suburban poet.

In the title role, Zoe Wanamaker is in terrific form. Slightly stooped, feet permanently in awkward stance mode, wearing plain, borderline unfashionable clothes she transforms herself into the small, birdlike poet with consummate skill. She is wholly believable as a woman out of place in the world but entirely at home in the confines of her abode. There is something permanently wistful about Wanamaker here and this is so despite her cigarette addiction, her spiky, slightly acerbic speech and her fussy idiosyncrasies. There is nothing not to like about her measured, completely engaged performance.

Wanamaker provides a masterclass in that lost art – poetry recital. She attacks the poetic text with fervour and passion; even when she is tossing out the lines like seeds thrown to chickens, there is a clear acuity behind the delivery. She gets all the humour as well as the luminous insight that every line of verse provides, her eyes shining with the intensity that only understanding can ensure. It is a joy to listen to her.

Lynda Baron is superbly sweet as Aunt Lion, the tough old spinster who runs the house where Stevie lives and who provides the significant, unquestioning, love that sustains Stevie through her lonely years. She is marvellously cantankerous about the Taxation authorities and prone to spit out “stuff and nonsense” while attending to domestic chores, making a pot of tea or chancing a quick nip of Sherry. It is a delightfully broad but deeply warm performance. When age catches up with Aunt Lion, Baron shows her frailty and discomfort with being dependant very clearly; these scenes between Baron and Wanamaker ache with truth and slight sadness. The moment with the junket is one to treasure.

Men played little more than an accessory role in Stevie’s life and aspects of that are summed up in the three characters played by Chris Larkin. His performance as the silly man who wants to marry her after a tentative but probably rubbish sexual encounter is especially fine: he is skin-crawlingly awkward in the scene where he wants to dissect the experience. Less successful is his archly camp friend/chauffeur to Stevie which seems modelled on Maggie Smith in full clutched pearls mode, but that is more about the scene itself which could be excised from the piece without any significant loss.

But Larkin’s best moment comes when he recites Smith’s Drowning, Not Waving, possibly her most famous poem. It’s a beautiful moment in a quietly engaging, gentle play.