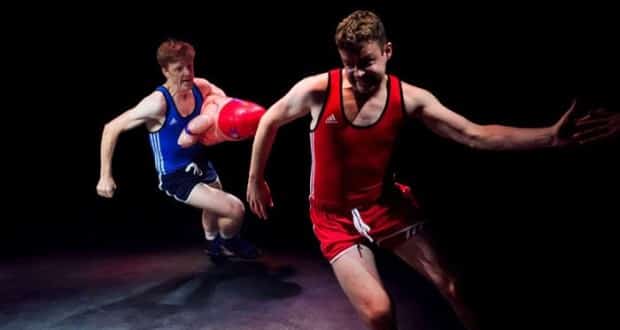 Max is a normal kid in a small town, a daydreamer who hangs about with his wierd pal Stevie. Then Max is called for his first Square Go, a fight by the school gates, and called to by school hard man Danny Guthrie. The genius of the play by Keiran Hurley and Gary McNair, and the production directed by Finn den Hartog, is that it’s presented as a wrestling event.

As Max, Scott Fletcher captures perfectly teen awkwardness, and he is matched by the equally excellent Gavin Jon Wright as Stevie. Their fake macho swagger is hilarious, and I’ve rarely experienced the Roundabout audience as fired up as they are for this show! From thumb wrestling, to arm wrestling, (with a member of the audience), to the boys wrestling, you could power the Fringe with the energy created In that tent! A superb soundtrack by Frightened Rabbit thrums under the action, and the adrenaline flows throughout the hour. It is the perfect show for this venue!

The script also punctures machoism, and the pointlessness of it all. It’s a hugely enjoyable production, one that will stay with you for a long time!