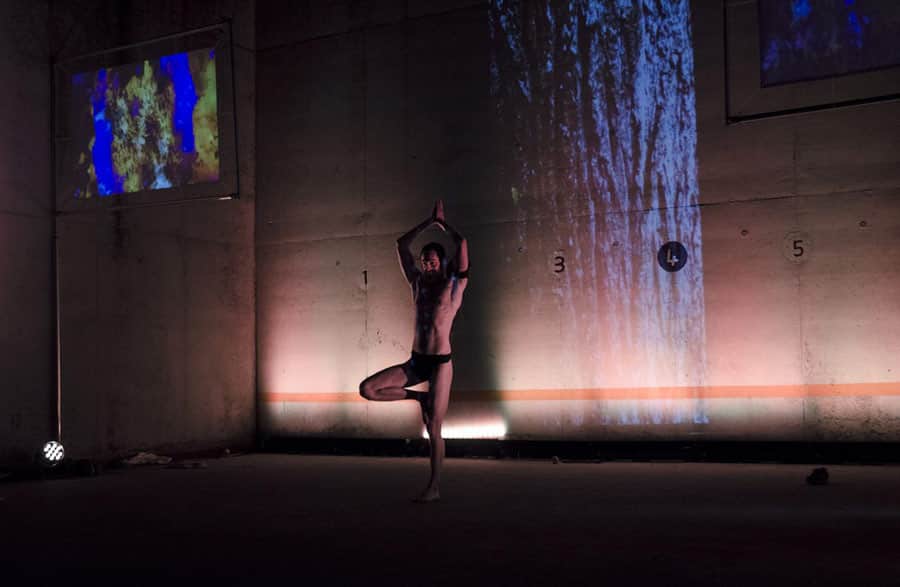 Staged at the Edinburgh Sports Club as part of the Traverse Theatre festival programme, Timmy Creed writes and performs his monologue about his life as a hurler and the journey he went on to become the man he is now. I know nothing about hurling and had no idea how popular it is in Ireland, but the fevered devotion to the sport reflects the passion felt by fans of any sport. Its location helps the piece, Creed uses the walls very effectively and it added to the atmosphere to hear squash games in progress in the background.

The play is divided into three acts. Thesis, act one, is where Creed introduces himself and the sport to us and the machismo of the world, the culture of winning and being in a pack, sexually promiscuous. He feels he belongs here, but as his routine becomes more frantic he begins to shout that this isn’t him. Anthesis, part two, is when, through the calm of snowboarding, he finds himself and goes to drama school and discovers yoga. Creed strips off the skin of the hurler and, in just a G string, now uses the space for yoga moves and meditation. It’s Act Three that’s the most interesting, Synthesis, when he dresses, smashes the fourth wall completely, house lights up, and he talks about returning to hurling as “the hippy hurler”. He performed this piece to his hurling club and it must have been quite an experience!

The piece is very literal, after all, this is his life, and I found that occasionally some of the sequences could have been shorter, it feels as if it’s being stretched out to fill an hour. However, Creed’s reconstruction of himself is honest and fascinating and he is calling for a new kind of masculinity. We can all get behind that, and he is a tremendously likeable person in a show that uses physical strength to it’s best advantage.