Douglas Mayo reviews the Off Broadway cast recording of Spamilton – An American Parody by Gerard Alessandrini. 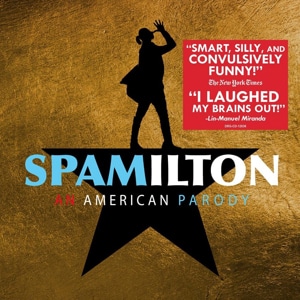 For the first time ever Gerard Alessandrini and his Forbidden Broadway compatriots have turned their sights on one show and on one composer – the show – Hamilton, the composer – one Lin-Manuel Miranda. The result is Spamilton – An American Parody.

Lin-Manuel is portrayed as very much Broadway’s saviour. There are jokes aplenty and Alessandrini’s mash ups that include Broadway classics like Guys and Dolls, Man Of La Mancha, Camelot, The Music Man, Gypsy and The Unsinkable Molly Brown.

None of the characters from Hamilton are spared, Aaron Burr, Sir, Nervous-er, The Schuyler Puppets, Daveed Diggs – The Fresh Prince Of Big Hair, The Film Where It Happens, and Who Lives, Who Dies, Who Cries. All contain moments of typical parody brilliance from the man who has been mercilessly ripping Broadway apart with love for many years now. But is it enough to maintain a complete show, that remains to be seen when the show opens at the Menier Chocolate Factory later this year, but as a recording it soon starts to wear thin.

If you are familiar with the Forbidden Broadway recordings, you’ll have heard the gist of many of these jokes before, and it’s time for the British Invasion jokes to be put to bed. They ceased being funny many moons ago. Now it’s just flogging a dead horse.

Otherwise, there’s half a good show here. Highlights include a love song to Sondheim, that becomes a half decent Sondheim parody – Another Hundred Syllables, No One Will Listen, and Look I Made A Rap.

King George opines the fact that Straight Is Back, and there’s a great trio with Lin-Manuel, Beyonce and Gloria Estefan.

There are some truly great moments as ticket beggar women come to the recording via Sweeney Todd courtesy of the fabulous Christine Pedi as Bernadette Peters and Liza (no surname necessary) and Nora Schell as Audra MacDonald.

Dan Rosales who plays Lin-Manuel throughout is a perfect match for the quick witted raps and his Miranda -like energy and enthusiasm comes across in the recording. Chris Anthony Giles makes for a brilliant Burr and Nora Schell’s Barbra is a delight.

All in all Spamilton is a fun listen, Alessandrini’s quick witted lyrics work well with the various styles of music they are attached to in this parody. There is no doubt that his barbed jabs at Broadway come from love and an encyclopedic knowledge of musical theatre.

But, Russell Crowe as Burr in the film – let’s not even tempt fate on that count.

PURCHASE A COPY OF SPAMILTON