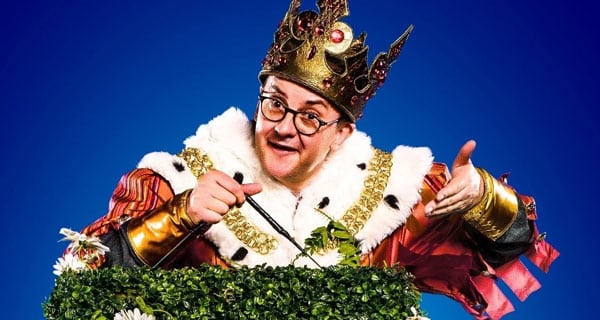 A law was made a distant moon ago that the tales of King Arthur and his loyal Knights of the round table would be excellent fodder for stage musicals. Lerner and Loewe’s Camelot saw the law passed and showed the sense of it; Spamalot, “the hit musical lovingly ripped off from Monty Python and the Holy Grail”, demonstrates the correctness of the law and the fun to be had in testing its boundaries. Christopher Luscombe’s revival of Spamalot, now playing at the Richmond Theatre as part of its UK tour, revels in the fun to be had but, equally, gives full measure to both the musical and comedy aspects of the piece.

This is not the first tour of Luscombe’s revival, but it is infinitely better than the previous incarnations. It boasts a first-rate, hard-working and multi-skilled cast, Tony Castro’s spot-on musical direction and conducting, spirited and humorous choreography from Jenny Arnold (all executed with pin-point precision and infectious enthusiasm) and very effective, colourful costumes and set designs from Hugh Durrant. The last is especially welcome, as the earlier incarnations seemed to have less money devoted to Durrant’s efforts on these key issues, with the result that the undeniable cheap and tawdry aspects of the production, which spring naturally from the text, were permitted to cross the line, to be too cheap, too tawdry.

Now, the balance in Luscombe’s revival is precisely right. The “make-do” feel of the sets is in sync with the coconut clacking of the unrelentingly cheery Patsy and helps set the tone of silliness and frivolity with which one must approach Spamalot to reap its many rewards. Po-faced expectations about “serious” musical theatre have no place in this audience; equally, if embraced with an open mind and a willing optimism, Spamalot is a show which deserves its place in any list of great, funny musicals.

The book and score from Eric Idle and John Du Prez (Du Prez provided extra music for the stage)refashions great chunks of material from famous and iconic Monty Python film sequences, separates the chocolate and collects the fallen cream, producing a singular confection which, if over-indulged, would be cloying. More farce than comedy, it needs precision playing: real characters in unreal situations. And, because it smashes the Fourth Wall when it chooses, there is room for unexpected zaniness and out-of-character moments which can be exceptionally funny. Luscombe finds the right balance continually.

There are at least two pieces of improvisation worked into the fabric of this production, that surely will be different in each performance, which bring that particular thrill of legitimate, as opposed to rehearsed, corpsing: the first involves Arthur trying to make Sir Robin laugh when he describes a creature; the second occurs when the Knights Who Now Say (insert impossible-to-recall-on-the-spot words or song snatches) try to outwit Arthur into collapsing into giggles. At least last night, both of these sections worked sensationally well, providing the audience with genuine, unexpected laughs.

If there had ever been a Carry On Gang film about Camelot, it would probably not have starred the gifted Charles Hawtrey as Arthur, but in Joe Pasquale’s turn as Arthur here you get a very clear notion about what that might have looked and sounded like. Pasquale is like some modern re-incarnation of Hawtrey but significantly less camp. His timing is exceptional, his wobbly voice intrinsically amusing, and he brings an Everyman quality to the role which suits the notion of a man plucked from obscurity (by a watery tart) to be crowned King.

Wide-eyed, dry, droll and gently teasing, Pasquale makes a lovable and very funny Arthur. He enjoys the “to the audience” moments most (and so do they) but he also excels at the scene work, always allowing the other people in the scene to have their moment, do their work. He is a generous performer and that helps make him all the more rewarding to watch. He is no singer, but that is no real impediment on this occasion.

Todd Carty is having a ball as Patsy, quietly clacking his coconuts, pulling silly faces and providing warm support to his beloved King. He has many silent moments of true comic delight and he kicks off Always Look On The Bright Side Of Life with real aplomb. He also makes the most of the faux-sad moment in I’m All Alone, and sets up Pasquale’s brilliantly off-hand “Patsy – he’s family” remark with razor-sharp skill. It’s a performance full of heart.

As the dazzling, delicious Diva-to-end-all-divas, The Lady Of The Lake, Sarah Earnshaw is quite wonderful. She has one of those stainless-steel, gutsy soprano belts which one imagines is so versatile and true, it could be used for sandblasting; perfect, in every way, for the vocal demands and dexterity required here. Come With Me, The Song That Goes Like This, Find Your Grail and The Diva’s Lament are all remarkable to watch and listen to with Earnshaw’s Lady in full vocal throttle. She doesn’t miss any comic tricks either. It’s a truly terrific turn.

The company is very small in numbers, so everyone plays multiple roles. Expertly, it must be said. Often it is difficult to work out who is playing what, which is a credit to the skill of the individual performers. Richard Meek is hilarious as the improbable Sir Galahad, complete with David Cassidy hair, and he makes vanity and narcissism an art form in that guise. He is equally hilarious as the rough, manly, King-father of Richard Kent’s unfeasibly gay Prince Herbert, but almost totally unrecognisable. The precision and detail he brings to both characters is exceptional – and he is no slouch as the Black Knight either, turning his hand to dead-pan delivery to great comic effect with true skill.

Will Hawksworth is splendid as the slightly scared, often slightly soiled, slightly too pretty Sir Robin and his diction and attack are exemplary in You Won’t Succeed In Showbiz (which has updated lyrics to retain topicality in discussing the notion that Stars are needed to make shows work, and distinguish itself from the Broadway version which focussed, with scalpel-like precision, on the need for the involvement of Jews to make a Broadway show a hit). He is also in fine form as the Finnish Mayor in the silly, fishy, opening sequence and displays further comic abilities as the Guard. He is also an excellent dancer.

Versatility is at a premium in this cast – so many can turn their hand to every task required exceptionally well. Richard Kent exemplifies this in his various roles, all of which are played with real flair, distinctiveness and distinction. Gossamer and girlish as Prince Herbert, with window-sill acting that upstages all (hilarious); tweedy and schoolmasterly as the Historian; bonkers and goofy as Not Dead Fred (great dancing); contemptuously French from the battlements as a taunting soldier; and crystal-clear and with beautiful tone as the Minstrel with the fiendish patter song, Kent’s character work is remarkably effective.

Jamie Tyler, similarly, displays great versatility and skill as the In, then Out of, the Closet Sir Lancelot (his disco scene is eye-wateringly funny), the superior French taunter (marvellous), the feral Tim the Enchanter and the quite wonderful Knight of the Ni. He has a reckless charm which is delightful in every way. Josh Wilmott, equally bashed with the charm stick, is very effective as Sir Bedevere, a talkative Guard, the loyal Concorde and a very feisty and Ena Sharples-like Mrs Galahad. Delightful.

One of the key aspects to the success of this revival is the discipline that every person on stage – and Castro and his band – bring to the various requirements of Spamalot. Luscombe’s direction is clear, careful and sprightly and the cast unerringly deliver the goods.

The old adage is that “Timing is everything”; this is true, and never truer than in the timing of this joyous and entertaining revival of a musical which seeks to do nothing but properly entertain its audience.