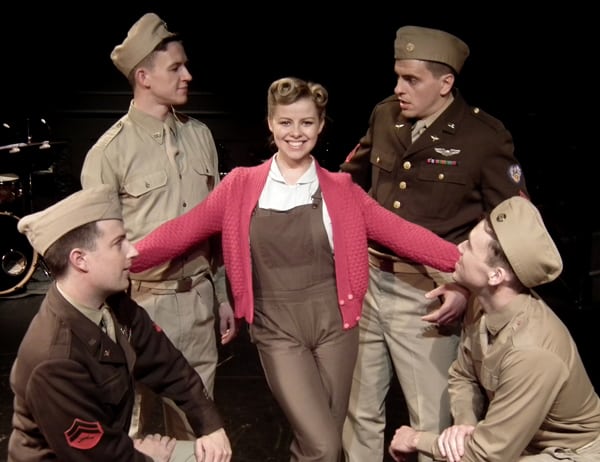 This is the most important and exciting rediscovery of a ‘lost’ British musical since the 1982 King’s Head Theatre revival of Vivian Ellis’s ‘Mr Cinders’ (a production that went on to transfer to the West End, where it ran for fifteen months and has continued to enjoy revivals all over the globe).  Originally written in 1987 for the high-quality amateur Questors Theatre in Ealing with music by minor industry figure, Gordon Caleb, lyrics by Caleb and Vincent McQueen, and book by Jean Caleb, it played a single week and incredibly has never been revived since. Yet, it has continued to fascinate many of the original company of 27, one of whom – Sheila Daniels – has now succeeded in producing and directing (enchantingly) a professional showcase production, which has just sold out its brief run at the New Wimbledon’s enterprising Studio. 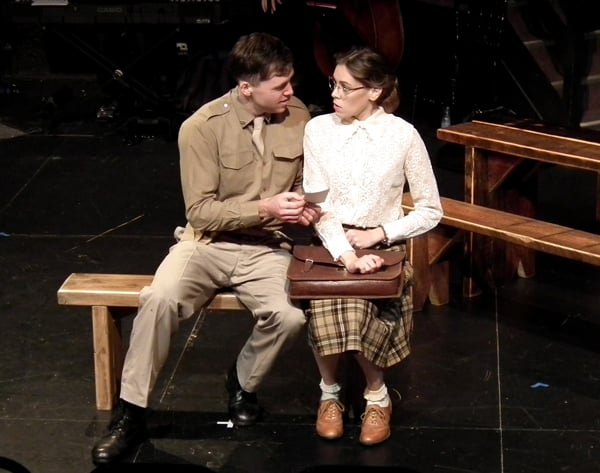 One can understand why it is popular with audiences. From the very opening number, with the population of a small town ‘somewhere in England’ (as the nondescript wartime reporting phrase had it) sending off its young men to fight Jerry in the war – and simultaneously receiving a US Army base and its population of GIs, the beautifully crafted music, instantly melodic and charming, warmly harmonious and smartly rhythmic, and the perfectly turned lyrics are directly appealing.  From the summary of the opening number, you can also probably tell that the story-telling in the show is technically adept: the minimum of means is used to compress the maximum amount of narrative in the musical numbers, lucidly set out for us in Madeline Eaton-Belton’s ever inventive choreography (ably added to by two of the mainly young cast, Ryan Ferrie and Aaron Jenson.) 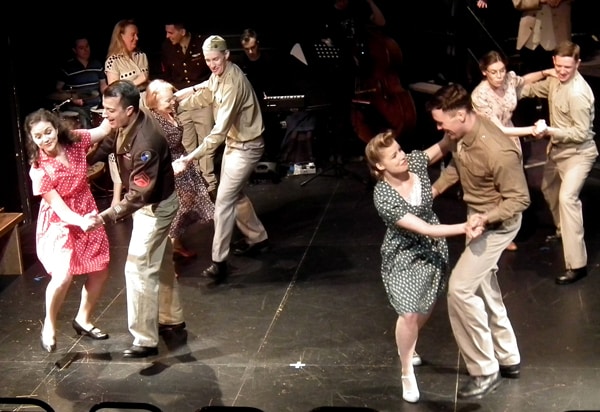 So far so effective, but it is in the second number, a nostalgic yet witty waltz for two of the matrons of the town (Patsy Blower and Olivia Maffett), ‘What Went Wrong?’, that we realise Gordon Caleb is a major melodist, capable of touching the heart with, as Cole Porter would put it, a constantly surprising refrain, using the two female voices to create exquisite harmonies.  The analogy is apt.  This score brilliantly evokes the musical styles of the period in a masterful pastiche that nonetheless convinces us that it really does belong to the period and always sounds ‘true’, rather than affected, but then Caleb lived through the period and served in the RAF – it is his sound.  The same can be said for the lyrics, which – while astonishingly polished and elegant – always carry the ring of truth about them: we always believe in the characters who sing them, and increasingly come to care about them.  The book achieves the same simple effect of being immensely bright and pleasing and also compelling: although wafer-thin in terms of plot, it is written with such skill, and such perfect understanding of its chosen form – musical comedy – that one has to take its characters and situations for what they are, and indeed come to see within its spun sugar frivolities so many aspects of ourselves.

The third number, a show-piece for the GI arrivals, ‘Me! Me! Me!’, is a Porter-like list song whose lyrics dazzle and delight as freshly today as when they were first written, or in fact when Cole’s comic genius shone in the 1940s.  The intelligence of the writing flatters the audience; the show tells us that we are the equal of its literary flashiness and sophistication, and the production does all the work for us to make the text’s meaning clear.  We are really enjoying ourselves by this point in the show, but – as always here – even better is about to come. 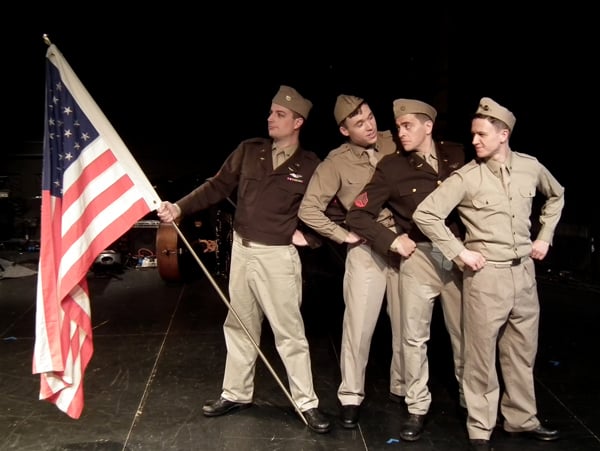 The sequence in which we hear from some hostile locals, ‘Yanks, Go Home!’ (by the busy-body NIMBYs, Mr Crowe (Derek Elwood) and Mrs Johns (Annie Aldington)), followed by a diegetic ladies choir enlivening afternoon tea hosted by the vicar (Tony Barber, brilliantly recreating his original characterisation from 1987) with a pastoral spoof, ‘In the Country’, and capped by the frustrated doughboys’ complaints, ‘We Wanna Go Back Home’, is where Caleb demonstrates his absolute command of his form.  In a completely unexpected stroke of genius, the three songs are not only piled on top of each other but interwoven with simply Mozartian skill, the voices threading in and out as in a symphonic finale: it is a wonderful set-piece.

He follows it up with a light-hearted love duet, ‘Funny Old You’, for Marjorie (the repressed schoolma’am of Stephenie De Whalley) and Chuck (the affectionately casual Sam Landon).  Then he agreeably changes mood for his ‘bad girl’ number, ‘Eva’, which is a different kind of duet for another pair of would-be, wouldn’t-be lovers: the Barbara Windsor-like, naughty-but-nice girl of the title (magnificently comic and vivacious Hannah Ponting), who isn’t content with just one boy (Corporal Frizelli, played by the genuine Yank here, Matt Fulbright… and, no, I don’t know if he’s any relation to the famous founder of the trans-Atlantic scholarships) – she wants the freedom to choose from them all, exhibiting the spirited independence that she carries off with aplomb.  This is the world, rather like Mozart’s, where the women always come out on top. 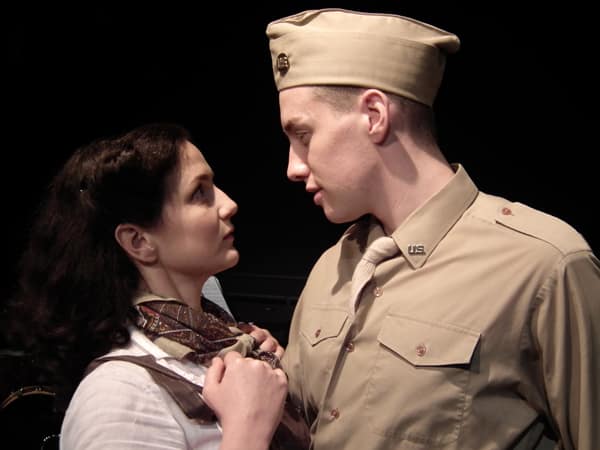 We next hear from the guys again; the spoken gripes of Joe (the splendidly Dick Haymes-voiced tenor of Ryan Ferrie) and the third GI, Elmer, (the southern gentleman, Jensen) merge seamlessly into yet another perfectly characterised song, ‘Will She, Won’t She?’, which turns out to be an incredibly well-crafted transition number, beginning in the midst of one scene, and depositing us at its termination in the middle of the next scene, with absolutely no suggestion of any break, showing more of the staggering technical capability of Caleb.  And then, for the conclusion of Act 1, he turns out another ensemble for his whole company with a propulsive jive number that frenetically resounds in the ears and minds of the audience all the way through the interval.

I’ve spent such a long time analysing the individual parts of the first half of the show for a very good reason: I want to be able to find an answer to the question, ‘Why has a musical as good as this been ignored for so long?’   And if a show like this languishes forgotten and disregarded, then how many other great shows are there out there awaiting discovery?  Who knows. 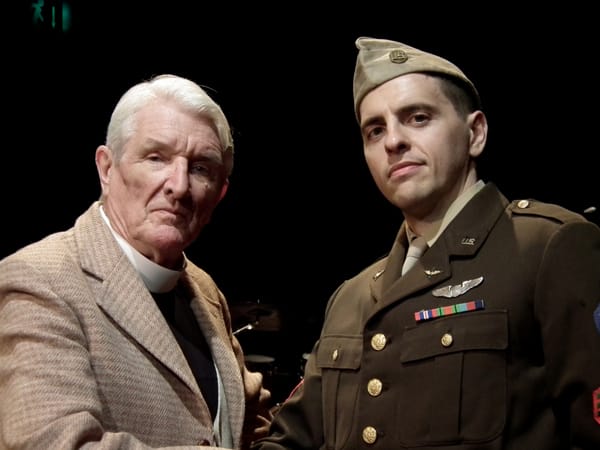 Suffice it to say, the second half provides delights in equal share.  Opening the act, the title number for the Brits is a beautiful number that might have been a hit for Vera Lynn.  There’s the jokey ‘Compatability’, the thoughtfully mature ‘Growing Up’ that mines the moral compromises thrown up by pragmatic responses to separation and the briefness of life in wartime (Patsy Blower is brilliantly conflicted in this scene, as the mother of the boy who was Joe’s predecessor in Phyllis’s affections before he came along and made such a favourable impression on her as well), and then we get the stunningly athletic ‘Do It For Uncle Sam!’ for the GIs, a song Irving Berlin would have been delighted to call his own (here led by the superb tenor of Fed Zanni, as Sergeant Meyer).  Torn between two boys, Phyllis (sweet-voiced Kluane Saunders) has to write a ‘Dear John…’ letter in ‘I Don’t Know How To Tell You’.  Then, in a twist reminiscent of Noel Coward’s dramas, where temptation is dangled in front of the eyes of a respectable English woman, which she then, often at the last minute, and thanks to some fortuitous external intervention, resists, time moves on: a rare letter arrives from the sweetheart, and then before we know it, the GIs go off to open the second front in Normandy.  Yet, plainly, beneath the lightness and gaiety of the musical-comedy-land we inhabit, there are darker emotions at play, and they land, tellingly, and give this work depth and resonance.

The band is onstage throughout, and attired in GI togs fits in perfectly, especially when asked to be ‘in character’ as the ensemble for the dance scene: MD John Spanyol’s delicious arrangements are largely improvised by him and his jazz-style combo of Diccon Cooper (bass), Dave Tandy (drums) and George Millard (reeds and woodwind – there are a few Tommy Dorsey-like moments for the clarinet!), and this spontaneity lends a further freshness to the sound.  And the costumes – of which there are MANY for the ladies – are gorgeous.  But the staging itself requires only five immensely versatile benches, a panel and a chair, giving a speed and fluency to the transitions which feels very contemporary.  The show is lit by Jed Brook, and Christopher Gadd creates some useful soundscape, and the overall technical direction is by Stuart French.

Daniels has efficiently tightened up the original script and here presents the story as a fluent action for just 13 players: although several years pass in the plot, she manages to make the gaps appear invisible, always focussing our minds on the importance of the relationships between the characters.  With the huge success of this workshop under her belt, she may well wish to revisit the script or the interpretation again, perhaps with a view to pushing things even further, especially in the second act, when emotions become most raw and exposed – possibly audiences today want and need to hear more of the struggle that characters experience, between the compromised lovers, for instance, and Elmer’s anger might be more furious than the arrangement for his ‘I Get The Run Around’ at present permits. In a show with so much sweetness, we require a good strong dose of salt, too.  We only have to think of how much intense drama the National Theatre drew out of Hammerstein’s script for ‘Oklahoma!’, a show not famous for its grittiness, to appreciate that under the smiling face of the 1940s there is often a lot of human pain.  These are relatively minor details, however, in a show that is in very, very good shape.

Gordon Caleb’s other work includes much done for the City Varieties in Leeds, featuring, ‘Strike a Light’, which is about the Bryant and May match girls’ strike, and transferred to the Piccadilly in London, and ‘Dearest Dracula’ that was produced in Dublin.  On the basis of this excellent revival, he is surely worth knowing better.   Meanwhile, there’s this terrific production of a great long-lost and now re-found musical comedy.  Any takers?

FIND OUT MORE ABOUT SOMEWHERE IN ENGLAND