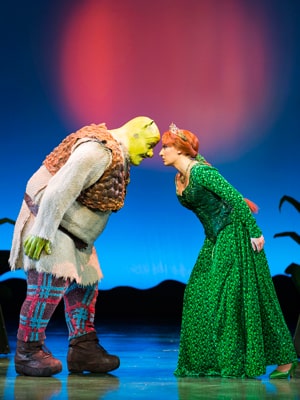 After over a year of touring the UK, Shrek made its way to the New Wimbledon Theatre as the pentultimate stop of its tour.

Based on the Dreamworks animated film and the incredible work of William Steig, David Lindsay-Abaire and Jeanine Tesori have created a thoroughly entertaining evening in the theatre that appeals to all ages.

After a year on the road, this is a cast that are incredibly comfortable with the roles they are playing, and are having a lot of fun bringing this musical to audiences across the UK.

Dean Chisnall bursts off the stage as Shrek, it’s an infectious performance, Chisnall manages to bring Shrek out from under the body padding and prosthetics, making him emotionally available to fellow cast and audience alike and that’s no mean feat. Who I’d Be, Shrek’s Act One closer sailed out of the ballpark in glorious form.

Bronte Barbé shines as the brash and fearless Princess Fiona, I Know It’s Today and Morning Person were beautifully presented with delicious overtones. Together with Idriss Kargbo’s Doney, Chinall’s Shrek had perfectly timed comic support. Lucille Lee-Redman made for a great younger Fiona and together with Laura Baldwin, the I Know It’s Today trio was a joy to listen to. Gerard Carey makes a magnificent Lord Farquaad. Taking the solid foundation built by Tesori and Lindsay-Abaire, the character has been built into a one man comedy empire with so many nuances. Nobody else on stage stands a chance.

I have to take my hat off to Will Haswell, Keith Henderson, Ryan Reid and Kevin Yates who animate the enormous Dragon, who is deliciously voiced in true Gladys Knight style by Candace Furbert. This team bring this eyelash-fluttering beast to life effortlessly. Bravo!

This production of Shrek is blessed to have an amazing ensemble of performers who work incredibly hard to play tap-dancing rats, Duloc guards, and a plethora of “freakish” fairy-tale characters, each with their own twist. For in Shrek, adults are treated to a level of comedy that entertains children and provides a much needed nudge and wink to parents. As one of my favourite moments in the show Freak Flag was comic and right on message. Nigel Harman has taken his own experiences as a cast member of Shrek and turned in a credible directorial debut. It’s always interesting to see a performer turn director on a show they have been involved in and this is no exception. It’s been my experience that you quite often get some extra touches that come from truly knowing the show and the characters that inhabit its world. I look forward to seeing what comes next.

Shrek is a musical about accepting people who may be different and not judging anyone based on preconceptions. To quote from the show “what makes us special makes us strong” and never have truer words been said.

Shrek is a great show for adults and children alike, but hurry it won’t be around for much longer. More’s the pity!